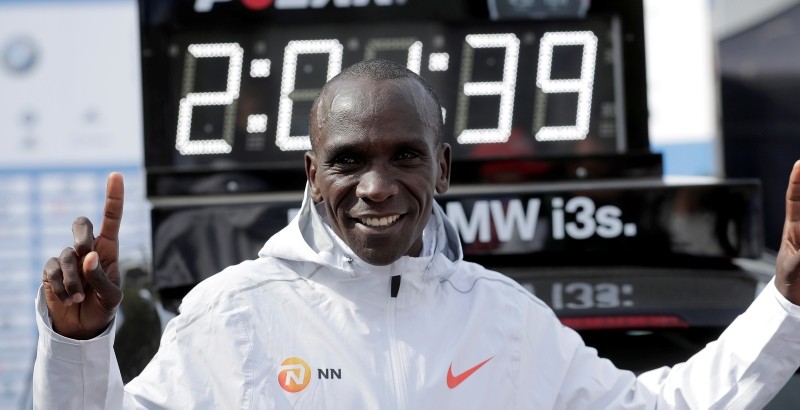 Eliud Kipchoge celebrates winning the 45th Berlin Marathon in Berlin, Germany, Sunday, Sept. 16, 2018. (AP Photo)
by Sep 16, 2018 12:00 am
Kenya's Olympic champion Eliud Kipchoge pulverised the marathon world record with a blistering run on Sunday, to shave off a staggering 78 seconds off the previous best and land the one major running crown that had eluded him.

The 33-year-old, widely seen as the greatest marathon runner of the modern era, ran an official time of time of two hours, one minute and 39 seconds on a sunny autumn day along the flat inner-city course to smash Dennis Kimetto's 2:02:57.

Kimetto's record had stood since the Kenyan set it at the same course in 2014 but Kipchoge's run will likely take some time to break as it is the biggest improvement on the marathon record since Australian Derek Clayton shaved almost two and a half minutes off the record in 1967.

"I lack words to describe this day," said a beaming Kipchoge, a former world champion over 5,000 metres and marathon gold medallist at the Rio de Janeiro Olympics in 2016. "I am really grateful, happy to smash the world record."

"They say you can miss it twice but not third time. So I want to thank everyone who has helped me," said Kipchoge, who had won in Berlin in 2016 and 2017.

"I am just so incredibly happy to have finally run the world record as I never stopped having belief in myself."

Kipchoge, who last year took part in the Nike Breaking Two project, where he ran two hours and 25 seconds with the aid of "illegal" in and out pacemakers, started off at a sizzling pace.

He quickly shook off his biggest opponent, Wilson Kipsang, to make it a one-man show and with weather conditions perfect and virtually no wind, it was clear after the opening few kilometres that Kipchoge's only opponent would be the clock.

His three pacemakers were pushed to the limit to keep the tempo high as Kipchoge dipped well below world-record time by the halfway mark.

But even after the last pacemaker peeled off after 25 kilometres, Kipchoge showed no sign of slowing, passing the 30km mark in 1:26:45, with a pace of 2:52 per 1,000 metres, with thousands of Berliners lining the streets and egging him on.

Berlin has now been the stage for the last six men's world records over the distance.

"It was hard running alone, but I was confident. I ran my own race, I trusted my trainers, my programme and my coach. That's what pushed me in the last kilometres," Kipchoge said.

Kipchoge kept up the pace to sprint through the Brandenburg Gate and complete a world record run that cements his reputation as one of the greatest runners of all time.

He has now won 11 out of 12 marathons he raced in, including at the Olympics.

Kenya completed their podium sweep with Amos Kipruto in second place more than five minutes later and Kipsang, a former world record holder back in 2013, in third.