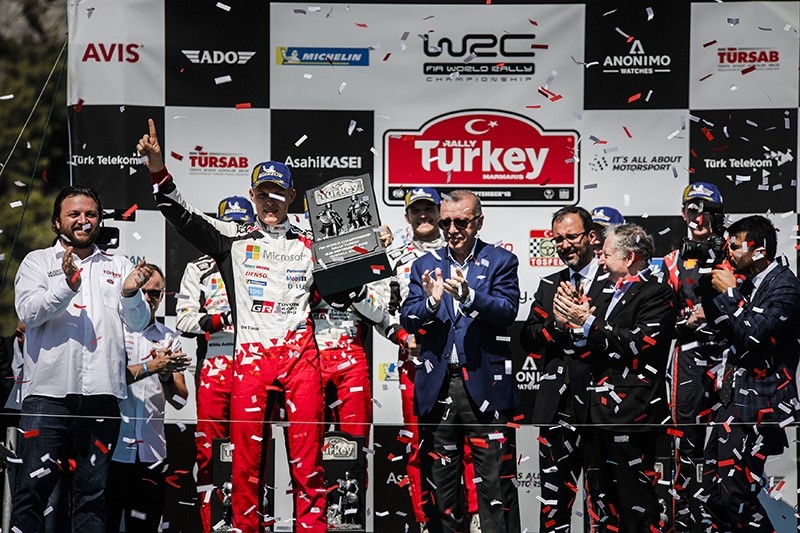 Estonian Ott Tanak, in a Toyota, claimed his third consecutive victory on Sunday, at the Rally of Turkey in the Marmaris district of southwestern Muğla province, to move up to second place in the world championship standings.

Neuville and Ogier were both forced to retire following race incidents on Saturday, allowing Tanak to take command and head into the final day Sunday with a 13-second lead on Latvala.

Although Neuville and Ogier were both allowed to start on Sunday, Tanak held firm during the final stages to claim his third win on the trot following successes in Finland and Germany.

Tanak leapfrogged Ogier into second place in the championship standings to sit just 13 points behind Neuville. Ogier (M-Sport Ford), the five-time world champion, is in third place at 23 points behind.

"On Friday we thought even finishing fifth or sixth would be a good result, but we also knew you didn't just have to be fast but the most cunning to win here."

With three races remaining in the championship, Tanak added: "The championship is becoming interesting, we have to keep on pushing."

Neuville, who broke his suspension on Saturday's opening stage (SS8), lamented a missed opportunity to stretch his championship lead.

"We're fighting for the championship against guys who are difficult to beat, but we deserved to win here, to be honest," said the Belgian.

"We were leading and were by far the fastest, until a little problem got in our way."

Ogier admitted the race for the title is wide open. The final races will be held in Wales, Catalunya (Spain) and Australia.

"We're still in with a chance," he said.

"This weekend didn't turn out how it was supposed to but, with three rallies to race, anything can happen."

The WRC Turkey was held between Sept. 13-16 in the Mediterranean resort town of Marmaris and hosted 68 cars from 22 countries to race 875 kilometers (544 miles) in 17 stages in 4 categories.

Turkish Automobile Sports Federation (TOSFED) announced that it will host the winner aboard a luxury motor yacht for a week to explore the Turkish Riviera.

President Recep Tayyip Erdoğan attended the award ceremony after the race and presented the cup to Tanak.

In a brief speech, Erdoğan said Marmaris hosted a very competitive race, adding that Turkey will host the event next year too.