Turkey's taekwondo stars complete each other in poomsae 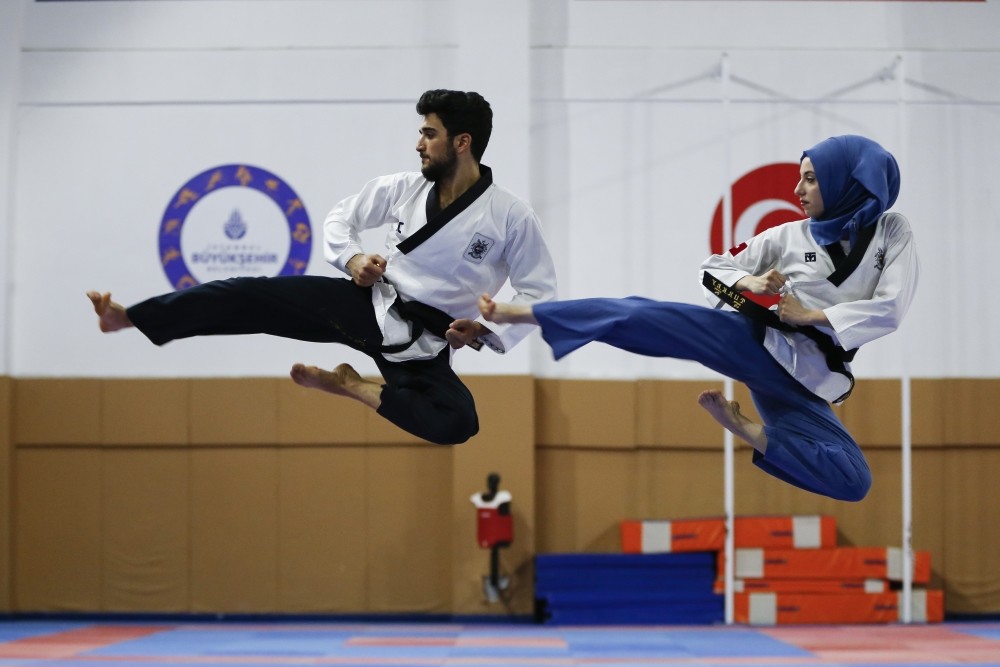 Ku00fcbra Dau011flu0131 and Emirhan Muran plan to organize events in Turkey to make taekwondo more familiar with the public.
by Daily Sabah Dec 08, 2018 12:00 am

Poomsae is a little-known word in the Turkish sports world, but two young athletes have helped popularize it after they won gold in the world taekwondo championship in Peru two years ago.

Kübra Dağlı and Emirhan Muran complete each other as teammates as they perform poomsae, a specific set of moves that make up defensive and attacking motions in taekwondo.

Dağlı and Muran enjoy the harmony they discovered by coincidence and have faith that it will help them build on their success in Peru. "We and our trainers noticed that we could improve our skills better together. So, we started working out together in 2014," Dağlı, who, like Muran, also pursues medals in the singles category in taekwondo tournaments, said. Speaking to Anadolu Agency (AA), the two athletes said they felt like "twins" and complimented each other.

Twenty-two-year-old Dağlı recalled how they first met. "Both of us live close by, and our trainers were friends. I was training at a gym, where Emirhan was also training one day. My trainer noticed how skillful he was. So, we decided to pair up," she said.

"He is a very good training mate. He is talented and motivates me a lot. We can assess what we are good at and what we do wrong while we train together. I spend more time with him than my family," Dağlı says.

Delving into poomsae, Dağlı said that it is basically a reinterpretation of taekwondo and they compete in "freestyle" where music accompanies the smooth moves performed by athletes. "We are free to pick our musical numbers, but there are certain rules. In the end, it is up to us to create our own choreography."

She says they support each other even in bad moments. "I tripped and fell in one contest once, and we ended up in the third place. We could have easily won it. I cried over it a lot but Emirhan comforted me by saying he would probably make the same mistake if he were in my place. A personal mistake can cost you a title in team play and that is a downside when competing together," she said.

Muran's gender would also be a challenge, but Dağlı said she used it to her own advantage. "He is more dynamic and stronger than I am, but it is a plus for me. It motivates me to improve myself. In the competition, he represents the power part of [choreography] and I play the part of [athlete] with fluid moves," she said.

Martial arts are a familial matter for Dağlı whose father is a boxing trainer and the uncle is a taekwondo trainer. She started out at the age of 13, with karate before switching to taekwondo. "My father did not want me to box, he thinks it is a very demanding sport," she said.

"I did not have any ambition when I first started taekwondo. Being an Istanbul champion [the city where she lives] was sufficient for me, but when I started working with a trainer other than my uncle, he asked me to raise the bar higher," she said.

Along with preparing for future tournaments in Turkey and other countries, Dağlı now plans to organize events along with Emirhan to draw attention to taekwondo in Turkey.

Emirhan Muran, 23, found success early in his career in the singles category in local tournaments, but he secured his place in an international contest for the first time after he met Dağlı. Though the duo impressed the audience in tournaments, it was not a smooth path to success, Muran said, referring to their pre-match arguments on choosing the best choreography. "We act like twins out there, but it does not apply before the competition. We have to discuss a lot about how to do the moves. We are responsible for every move we do. The World Taekwondo Federation allows athletes to use five techniques, and we have to integrate them in the choreography," he said.

The duo draws their inspiration both from their previous performances and by watching gymnasts and dancers.

Muran started his taekwondo career after watching martial arts films. "I originally signed up for kickboxing classes, but my trainer was also a taekwondo trainer. After one month of training for kickboxing, he told me I was more suitable for taekwondo," as he recalled the beginning of his career seven years ago.

Next in his career is a medal with Dağlı in the 2020 Tokyo Olympics. "I started late [to taekwondo], but I trained a lot. The training helped me more than natural talent. We trained with Kübra six days a week. Our first goal was to be European champions and after we achieved it, we worked hard for two years for Peru," he said.