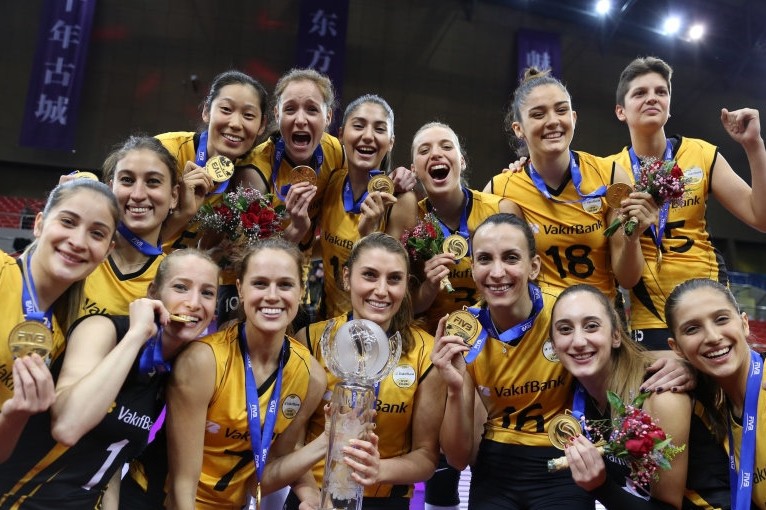 The Vakıfbank women's volleyball team returned victorious to Turkey after securing a third world title. The players, confident of their future success, say they are now looking forward to next year's competitions to defend the title

The Vakıfbank women's volleyball team returned to Turkey in high spirits after winning the world championships.

On Sunday, the club won the FIVB Volleyball Women's Club World Championship in China, its second win in a row. The club has now won the title in 2012, 2017 and 2018.

Speaking about their victory to Anadolu Agency (AA) yesterday, star player Kelsey Robinson said: "I think it was a team effort. I think every single player and staff gave as much as they could and l am very proud of it."

About her future with Vakıfbank, she said, "As long as they want me. But, for now, I am here for this season."

Sharing her experience with the Turkish club, the American player said: "It is always about being the best team we can be. Whatever that means, however, we can achieve that, I think that is the most important goal."

Turkish clubs have won the title six times in the last nine years.

On team spirit, Robinson said, "It is about being big sisters to them and helping them off the court and on the court and guiding them and being good role models and giving them confidence in the game."

"It was a tournament that we played very well. In this season, many teams spent a lot of money and they become very strong. But, at the same time, we know our strength. We know we can compete against everybody," he said, adding that he was looking forward to more victories, coach Giovanni Guidetti said.

When asked if the winning streak will continue, Vakıfbank Sport Club President Osman Demren said, "It would be hard to repeat these victories."

"There are incredible clubs in Turkey, Italy and Brazil. We compete with Brazilian teams in China. These teams played high-level volleyball and if we showed any weaknesses, they would beat us," Demren added.