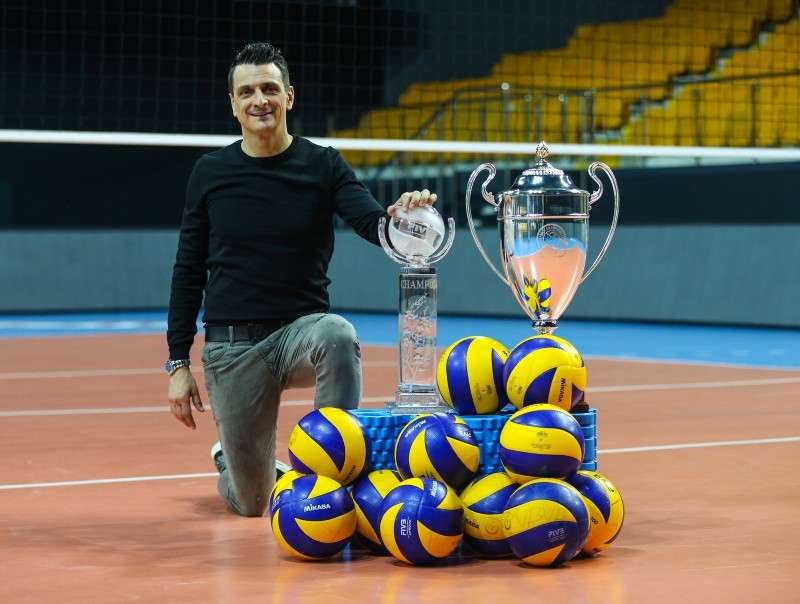 World champion Vakıfbank owe much of their success to Giovanni Guidetti, the Italian coach of the team since 2008. Guidetti spoke to Daily Sabah about how a pep talk by the club's chair fueled his ambitions and the team's determination to remain on top of the world

When he came to Istanbul about one decade after he launched his coaching career in his native Italy, Giovanni Guidetti did not know that this would be the place where he would peak and would find the love of his life. The coach of both the women's volleyball team Vakıfbank and the national women's volleyball team, Guidetti says a conversation with the club's chairman at a time when he was mulling resigning, made him rethink his life and paved the way for his success story. Today, Vakıfbank is the undisputed leader of women's volleyball in Turkey and the world after securing the title in the FIVB Volleyball Women's Club World Champions in China in December 2018. Guidetti, for his part, boasts three World Club championship titles and four Champions League titles.

His review of a decision to quit after seeing he had failed to do what he had aimed for in his early days with Vakıfbank brought the team unprecedented success. Speaking in an exclusive interview with Daily Sabah, Guidetti recalled his conversation with club chairman İlker Aycı who later proceeded to take the helm at Turkish Airlines as CEO. Aycı told him he was too quick to give up, and they hired him in the first place for a long journey. The chairman succeeded in convincing him to continue at a time when they would "bring about new stars in volleyball and make Vakıfbank an internationally known name." This was all the coach needed: a bit of extra self-confidence and motivation.

"This is a really good story. I didn't know how long I'd be here when I came to Turkey. There was a small, inadequate hall for training. I wasn't considering leaving as soon as possible though," he recounted.

Five years later, he was still in Turkey. A marriage in 2013 to Bahar Toksoy, a Turkish volleyball player, apparently motivated him to stay longer. A string of victories added to his past successes including top and second titles with German and Dutch national volleyball teams. Guidetti is now a firm believer in Vakıfbank's future victories, especially after a new, larger sports hall the club built in 2016. "The hall was a reward for our past victories, but the victories did not end. We have to win more to deserve this hall," he said. "A sports hall can change many things," he added. "You have to have the best opportunities to attract international talents to your team and keep them here. We in Vakıfbank want to remain at the top of the world in volleyball."

Vakıfbank, founded 33 years ago, amassed 10 national championship titles and six Turkish Cups and broke records with a winning streak of 73 matches in all competitions between October 2012 and January 2014. Guidetti says winning is the best thing to motivate the team. "Great athletes look forward to future challenges. As a coach, it is my task to bring the team to the highest level they can achieve," he said. Still, challenges remain, such as losing two key players, Naz Aydemir and Gözde Kırdar, who parted ways with the team recently. "They were not just two random players. They were like big sisters to the team and powered them up. Their departure seriously traumatized them. After them, we took a great risk and formed a new lineup at the cost of failure. We are not as strong now compared to the past season and added new, young players. We have three Cups ahead and it won't be easy," he acknowledged.

Guidetti describes himself as just "a maestro deciding who will play when" and says exhibiting best performance lies with the players.

He is not ready to end his career in Turkey now but takes pride in his deputies who he can hand over the management "easily." "Dehri Can Dehrioğlu and Saim Pakkan can coach any club in Turkey with their experience. Our technical staff is as important as the team. The foundation of my job is the accomplishment of the technical staff," he added.

"I feel like I am getting old when I see my assistants leaving the club and becoming successful coaches on their own. It is worrying but I am not ready to quit now," the Italian coach said.

U2 and children inspire Guidetti

Guidetti's two passions also serve as inspiration. One is the Irish rock band U2. He went as far as naming his daughter after Bono's wife Alison. "They have been my idols since I was a teenager. I went to their concerts, memorized their songs. What impresses me most about them is the team spirit. These four people did not split for four decades. They certainly had their fights and arguments, but for four decades, they remained together for the same goal, making better music. I also love how they are dedicated to social responsibility projects. They are doing so much charity work. I think they are unique in this field and try to give a message to the world," he said.

For his part, Guidetti chose teaching Turkish children volleyball. "I was thinking of doing something for Africa, but then I thought why I didn't something for Turkey and discussed it with my agents. We went to Elazığ and Bitlis and I will soon go to Zonguldak. I am not looking for talented players. I am just bringing a message to these children, these young people. You may have limited means but it is not an obstacle for you to take up sports. You can also have a career in volleyball," Guidetti said. It apparently paid off as Guidetti says there has been an overwhelming interest in volleyball from children at a school in Bitlis that he visited.