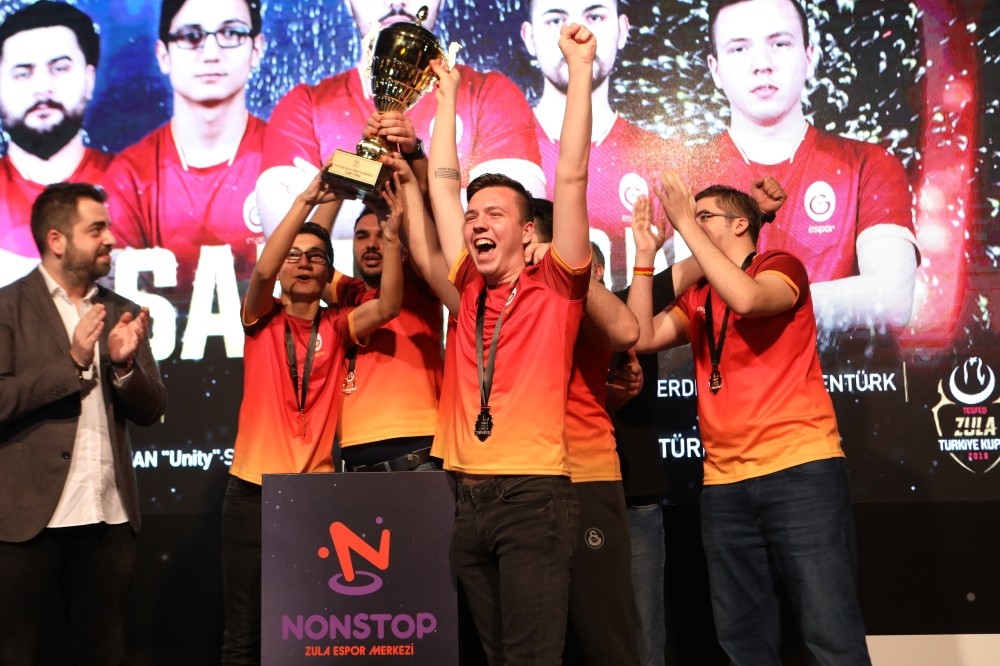 Members of Galatasaray Esports celebrate their victory after beating their rival Gamers of Future 3-1 to win the Turkish Cup, in the Nonstop Zula Esports Center on u0130stiklal Avenue, Taksim, Istanbul, Jan. 27, 2019.
by Daily Sabah with AA
Jan 29, 2019 12:08 am

The Lions claimed the trophy in the Nonstop Zula esports Center in the İstiklal Avenue, Taksim – a key esports battleground for thousands of Turkish gamers.

There was a great deal of competition between the two teams at the sports center, which saw record-breaking crowds.

Champion Galatasaray won TL 80,000 prize while runner-up Gamers of Future received TL 50,000. In Turkey, esports became very popular after Beşiktaş ESK was founded in 2015, followed by Fenerbahçe e-Spor and Galatasaray Esports in 2016. The Ministry of Youth and Sports gave official licenses to players, who joined the League of Legends 2014 Winter Olympics, the first official organization from Riot Games. The tournament took place in Bostancı Performing Arts Center in 2014, sponsored by Avea Wopps.

In the age of technology, one thing is for sure that esports will continue to attract even more fans and interest from around the world. Be it a hobby, a source of income or a platform of rivalry, esports is here to stay. For many, esports may not be an easy dream to chase, with more professional rivals around. Yet, it is poised to be the new king of the cyber world.