Kings of the rink set out for Europe campaign 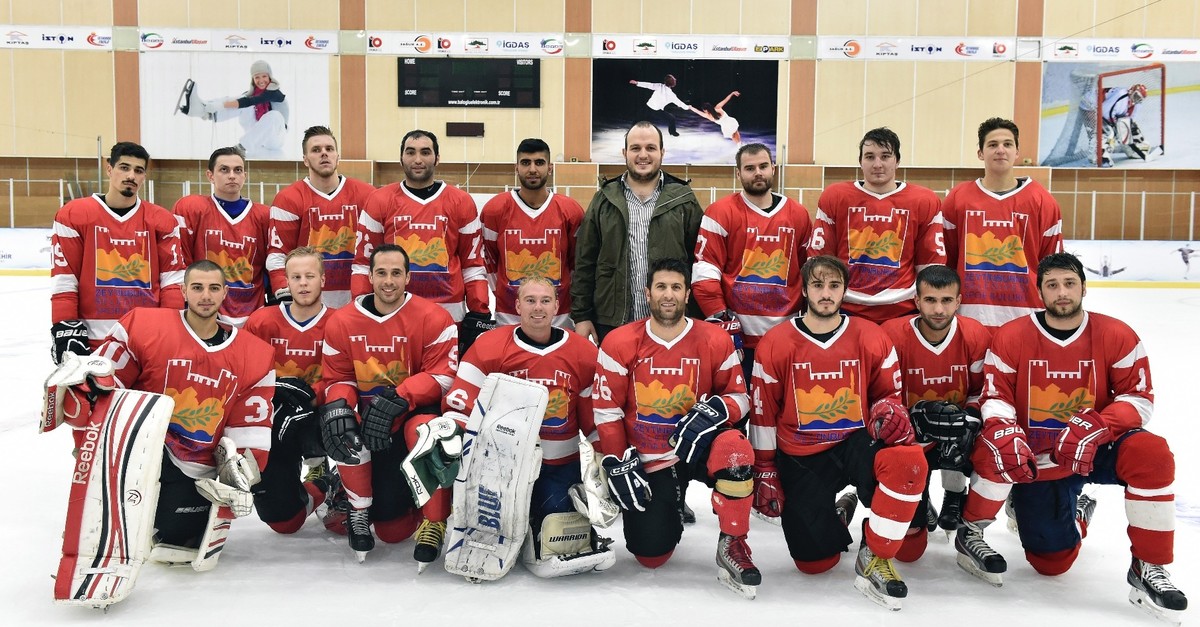 Winning its fifth top title in the local league, the Zeytinburnu ice hockey team now eyes competing in Europe. The club's chairman, Halit Albayrak, is confident of earning a spot in the top-flight Continental Cup

Ice hockey is a relatively new sport in Turkey, but a team based in Istanbul is making waves with its unprecedented success. Zeytinburnu won its fifth consecutive top title in the local league earlier this month and is ready for competition in the Continental Cup, a contest where top European clubs vie for titles.

Speaking to Daily Sabah, the club's president, Halit Albayrak, who also serves as chairman of the Turkish Ice Hockey Federation, detailed their future goals. Drawing attention to the success of Zeytinburnu Municipality Ice Hockey Team in Europe, Albayrak noted that Turkish ice hockey can be in the Kontinental Hockey League, which is one of the most important leagues in the world. Albayrak says that Turkish youth have shown that they are able to domore with the

success of Zeytinburnu. Mentioning the stories of the young people who achieved historic success as athletes while they had collected waste before, Albayrak continued, "It became a tradition to represent Turkey in Europe for Zeytinburnu. If we look at our rivals in Europe, they are in a much better condition than us. However, this does not mean that we will accept where we are. We managed to reach this condition by forming a team from our young people, five of whom had been drug addicted, and made our name in Europe. Therefore, we can be in the Kontinental Hockey League."

Albayrak gave information about this Russian-based league, which contains European and Asian countries.

"There are nearly 60 away matches throughout the season. The teams from Russia, Finland, and Sweden get involved in the league. China has just got involved. There is participation from Germany, as well. We, as Zeytinburnu, want to be in the league from Turkey. We have sportsmen of Turkish origin who play in clubs that are very far ahead in ice hockey in different geographies of the world. These children need to play in a Turkish team for 16 months to become national athletes. It is so difficult for us to reach these children in these conditions. The German national team took second place in the Winter Olympics last year, and the top scorer of the team was Yasin Ehliz from Turkey's Konya. Sinan Akdağ is another Turkish sportsman on the same team. Our goal is to be in this league. We want to reach out to more children by working harder for this and going out for more matches," he said.

It comes into question that Turkey, which has hosted global sports organizations in recent years, can host an ice hockey championship this time.

"In June, it will be determined at the general meeting of the International Ice Hockey Federation (IIHF) in Hungary where the Continental Cup will be played. We, as Istanbul, seek to host a group match of this championship in our city. We aim to play our matches at the Silivri Kapı Ice Rink. I hope we can give this good news to Turkish sports fans," the chairman added.

A TV series called "Tek Yürek" ("One Heart"), which reflects a drug-addicted youth's coming to life with ice hockey is being aired on public broadcaster TRT 1. The lead role of the TV series Hilmi Cem İntepe said, "Ice hockey, which I have met through this series, became one of the things that I cannot remove from my life. I insist that you should direct your children to ice hockey or figure skating. You will not regret it."

Highlighting that the TV series increased the attention to ice hockey, Albayrak also stressed, "The success of the series arouses from the success of our real story. The part that affected us is that the number of people who come to our hall increased 200 percent after the series was released. We, of course, are looking for talented youth who will love ice hockey and dream to build a career in this sport. Our trainers are ready to teach them."

We want our children on the ice

Albayrak thinks that interest in ice hockey is not enough today. He has a recommendation for children who do not raise their heads from their tablets, computers and cell phones and may have cervical disc hernias in the future.

"The number of the mass that we appeal to is not enough when compared to our facilities. Our main goal is to save our children and young people from computer games, which have more effects than drug addiction. We want to increase the number of families that we can reach, and introduce more children to the ice rink. We want to bring them to life. We want to reduce the burden of the families of these children. We want our children to look ahead not at screens," he said.

"Our president said that they will build an ice rink for the youth of our district at a public meeting held in Zeytinburnu in the previous days. He showed his belief in us. I hope this rink will be completed in a year," he remarked. Stating that he hopes this success of Zeytinburnu will make other municipalities act, Albayrak said, "We know that Fatih municipality conducts work in this direction. Also, we think that Beykoz municipality again will take action like us. I think every district in a metropolis like Istanbul can make a name in Europe by dealing with sports."