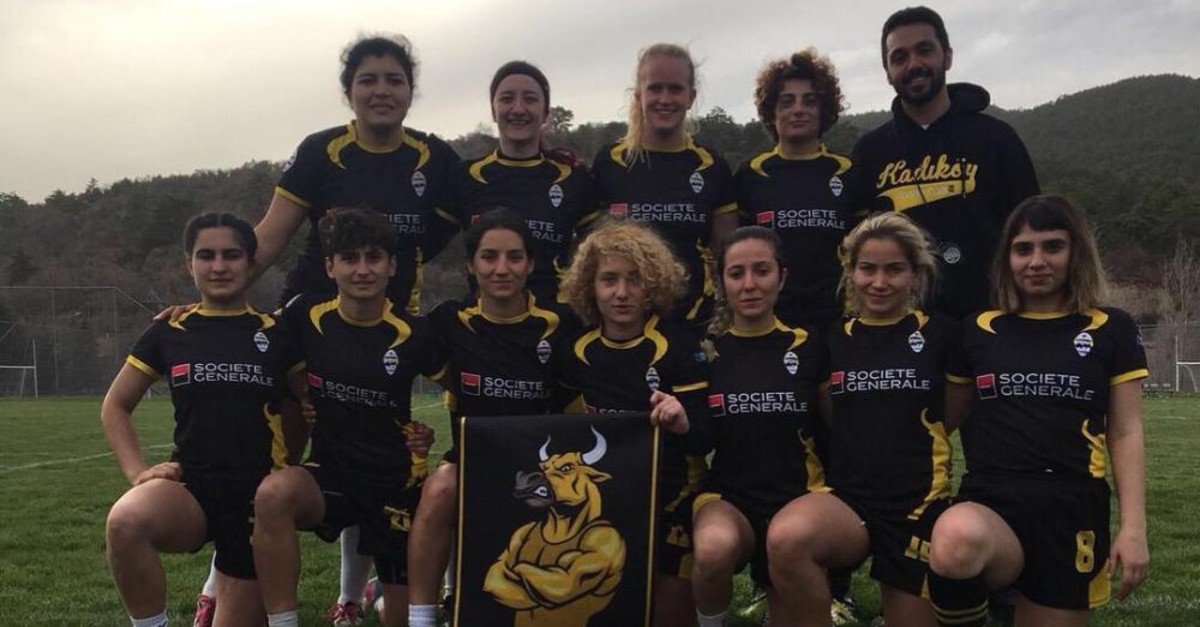 Kadu0131ku00f6y Ladies are made of part-time athletes whose professions range from engineers to lawyers.
by Serkan Ünlü Apr 03, 2019 12:41 am

In Turkey's fledgling rugby scene, the Kadıköy Ladies team, which takes its name after the famous Istanbul district, gives women an opportunity to make their name as the city's only female rugby team

Kadıköy Ladies was founded in 2014, roughly three years after Turkey got its first rugby federation. Playing a relatively new sport in the country, Kadıköy Ladies strives to make a name for itself as the only women's rugby team from Istanbul. It is steadily climbing up in the local leagues. The team based in Kadıköy, a crowded, cosmopolitan district on the city's Asian side, will compete in the local rugby championship for the fifth time this year later this month and hopes to repeat their success of reaching the third finals in the past three years.

The team aims to show that women can have their place in sports and represent Istanbul in local and international tournaments. Made up of players between the ages of 20 and 40, the team, which once struggled to recruit players, has now expanded and has an additional junior lineup. Most players express their regret for not having played rugby earlier in their lives.

The public knows little about rugby which is immensely popular in the English-speaking world compared to football-mad Turkey. Players say the most common reaction of people learning their profession is how they engage in such a tough sport. Each player says they are glad to bond over their passion for rugby, which they believe is playing a role in their personal development with its focus on team play and respecting each other as well as "suppressing any tendency to violence." Players devote what little time they have to the sports as none are full-time athletes. Their professions range from engineers and lawyers to soccer referees.

Ece Tekin is the team's third and first Turkish coach, after tenures of French coach Julien Tren and British Steve Jackson, both men. Tekin says rugby is "both simple and difficult." She explained that every player has to look out for one another. One advantage of rugby for sports enthusiasts is that there is a place for everyone on the team no matter how different their features are. It is basically a collection of physically strong and those with "weight problems" as well as defenders who have to do little other than standing their ground passionately. Players only need to focus on tactics they trained hard before each game. There is no place for "selfish" players like in football and a deviation from team play can cost many points.

"There were so few players here when we first started out," Tekin recalls. Their pitch was small as well, only 40 square meters. "We had to rent pitches out of our own pockets in the beginning," Tekin said before the team found sponsorship from a filmmaking company. "We sacrificed a lot just because we passionately love rugby," she added. Tekin says rugby is "smoother" compared to other sports and some players even switched from wrestling to rugby for this reason. "You see players fighting rivals in other sports but this is not the case in rugby. Everyone hugs each other after the final whistle," one of the team's star players, Bengü Özgen, said.

Şafak Öztürk, a fitness instructor and a rugby player of six years, is among those switching from wrestling to rugby. "You don't actually have to have a sports background," she acknowledges. "It may look like a tough contact sport but it gives us a chance to deconstruct the traditional woman figure in people's minds," Öztürk said. She has confidence that the Kadıköy Ladies can accomplish a lot more with support from sponsors.