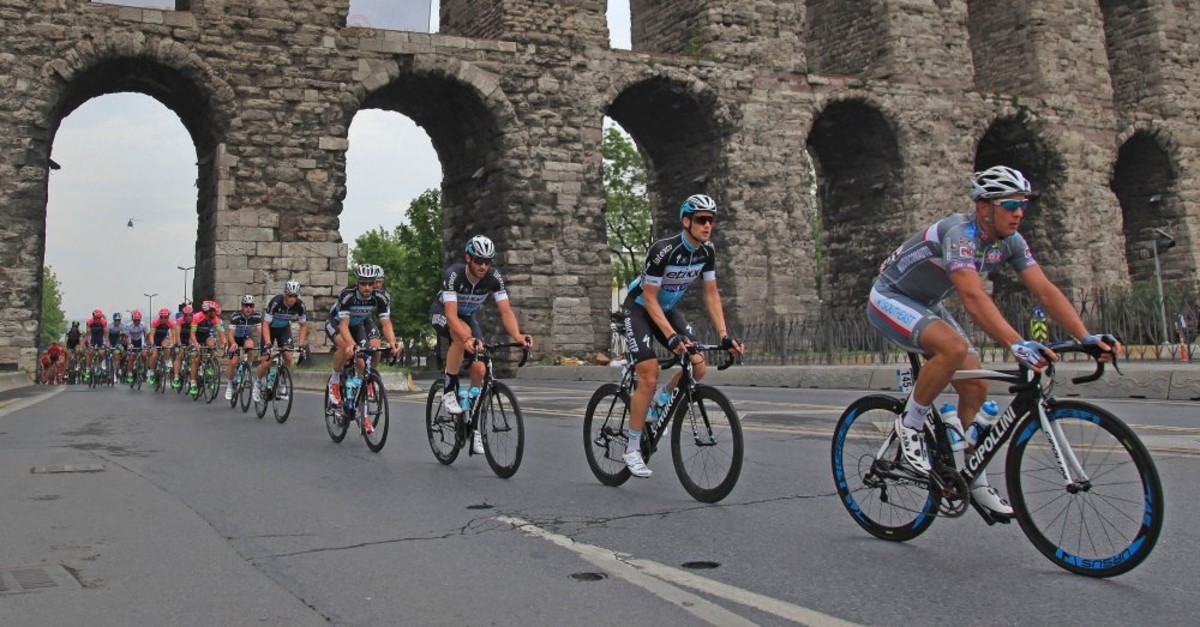 Tour of Turkey kicks off next week in Istanbul. Turkish Cycling Federation head Erol Küçükbakırcı said the race aims to promote the beauty of the city and the Marmara region

One of the oldest regular sporting events in Turkey returns next week. The Tour of Turkey, the 55th Presidential Cycling Tour of Turkey as it is formally known, starts April 16 in Istanbul where it was first held in 1963 and ends there April 21. Thus, it will once again be the only intercontinental cycling race, as cyclists will cross into Asia from Europe and vice versa in the first and last stages of the international race. Some 119 cyclists from around the world will compete in the event that originally started as the Tour of Marmara, named after the northwestern region where Istanbul is located. The race usually picked Istanbul for the starting point in past years, but it was largely a Mediterranean and Aegean affair as cyclists competed on scenic routes encompassing İzmir and Antalya in the south. Erol Küçükbakırcı, director of Turkish Cycling Federation, said that the change of route is a matter of diversification of the race and to relieve cyclists of logistics challenges on the Mediterranean and Aegean route. Speaking to Daily Sabah, Küçükbakırcı, a former Olympian cyclist, said the Tour was held "on a very beautiful route" for years but the stages were as challenging as they were attractive to cyclists. "This year's event will be centered on Istanbul, and there will be fewer transfers for cyclists between the stages," Küçükbakırcı said.

The event starts in Sultanahmet Square, which is surrounded by iconic Istanbul landmarks like Hagia Sophia and the Blue Mosque. Cyclists then head to Tekirdağ, west of Istanbul, in the 160-kilometer stage. The next stage takes them from Tekirdağ to Eceabat, to the finishing point at a memorial for Turkish soldiers that fell in World War I. The third stage begins in Çanakkale province where Eceabat is located and ends in the Edremit district. The longest stage, which covers 184.1 kilometers, takes cyclists from Balıkesir to Bursa. Yet, this will be less challenging for cyclists as the next stage between Bursa and Kartepe, which runs for 169.1 kilometers, takes them to snowy and steep Kartepe, a popular ski resort near Istanbul.

The Tour of Turkey's last stage runs from Sakarya, where Kartepe is located, to Istanbul. Cyclists will have a unique experience riding through the underwater Avrasya Tunnel that connects Istanbul's Asian and European sides, in the last stage of the race. Küçükbakırcı said a switch to the route does not mean to dismiss the former route completely and points out that Mediterranean cities, particularly Antalya, became a favorite training destination for cycling teams from abroad thanks to the Tour of Turkey. The event also acts as a warm-up race for cyclists ahead of Giro D'Italia, one of the oldest bicycle races where top cyclists from around the world compete. "We mapped out the stages in consideration of Giro. For example, the uphill climb stage in Kartepe will be beneficial for teams training for Giro D'Italia," Küçükbakırcı said. "April is a month with a busy schedule for cycling teams. It is important for them to travel less but race in more stages. So, we cut down transfer points this year to reduce gaps between stages, and we really had positive feedback from teams," he added.

Mark Cavendish, a 30-time stage winner in the Tour De France, returns four years after he won the top title in the event. Irish cyclist Sam Bennett who shone with seven stage wins in the past two races, also returns. Caleb Ewan of the Lotto Soudal team and Deceuninck-Quick Step's Colombian cyclist Alvaro Hodeg are cyclists to watch in this year's edition.

Eurosport and TRT World, the English-language channel of Turkey's public broadcaster, will broadcast the Tour of Turkey. "This is a race that will be watched by millions around the world, so it holds a significant place in efforts to promote Turkey to the world as well as promoting cycling culture," Küçükbakırcı said. "Roads were renovated to better accommodate cyclists, and in a way, it helps promote cycling for amateur riders," he added.

Erdoğan puts presidential back in tour

The race is hosted under the auspices of the presidency, which significantly expanded under President Recep Tayyip Erdoğan. As Turkey seeks to promote cycling in a country preferring motor vehicles to bicycles, the government moved to build more bicycle lanes and encourage people to take up cycling, at least for its health benefits. Berat Alphan, deputy president of the Cycling Federation, said they were lucky to have a president that valued and supported the sport. "It also gives us more responsibility for better planning of the race. We also plan to include new stages to the Tour in the future, especially in the Black Sea and eastern regions," he said, noting that the president attaches importance to take the race to regions where cycling events have been rare or nonexistent. Alphan said cycling has been a popular sport lately, and this boosted salaries, fees of teams and cyclists. He said cycling in Turkey could raise the bar if popular football clubs in football-crazy country invest in the sport. "Cycling is a relatively low-cost sport compared to the amounts invested in football or basketball. We have good, corporate cycling clubs with good infrastructure and new regulations giving incentives to amateur clubs. If football clubs are involved, it will raise the bar much higher for cycling."