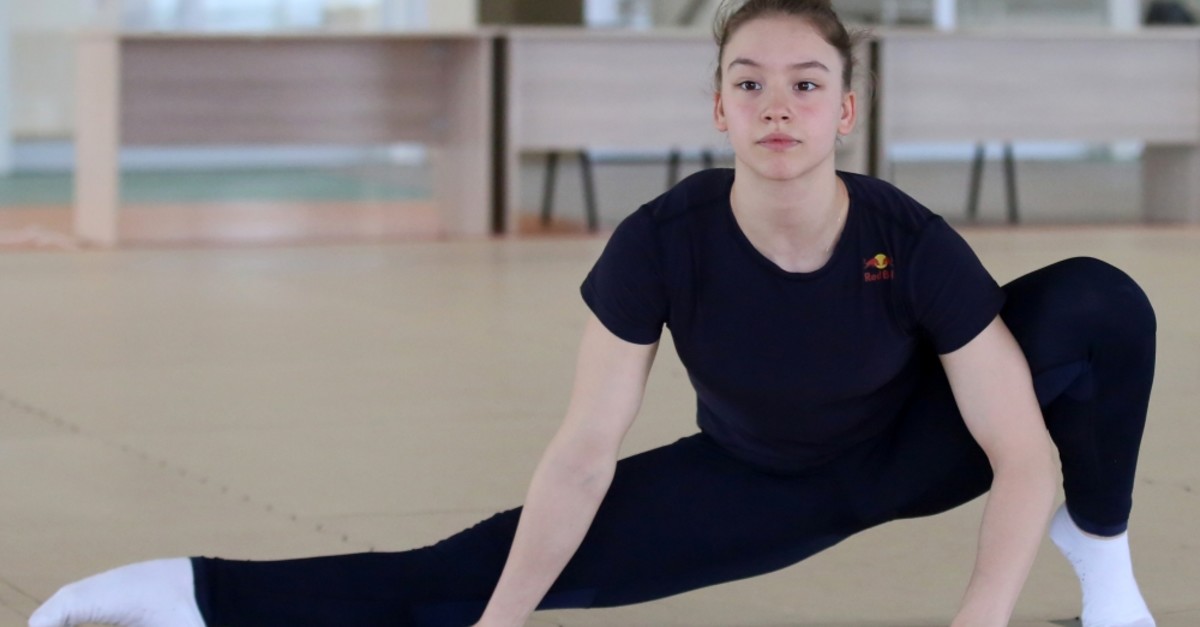 After winning gold in her first ever appearance at the world aerobic gymnastics championship earlier this year and a run of successes in the junior category, 18-year-old Ayşe Begüm Onbaşı has now set her sights on a European title

Ayşe Begüm Onbaşı, dubbed the "Golden Girl" for her accomplishment in gymnastics, is now all grown up and made her World Cup debut last month. It was a smooth and successful transition that brought the 18-year-old national gymnast her first gold medal in the tournament in Portugal. Onbaşı is now looking to clinch a second gold in her international fledgling career - this time at the European Gymnastics Championship to be held in Azerbaijan next month.

The young athlete trains hard in her hometown in western Turkey's Manisa so that she "can wave the Turkish flag" again at an international tournament. Onbaşı took up gymnastics at the age of 6 and was 8 years old when she started picking up medals from local tournaments. She made her international debut two years later and has garnered more than 100 medals, mostly gold, in her short career since then. Her real breakthrough, though, came in Portugal's Cantanhede in March when she outscored the field for artistry and execution and racked up 20.70 points in the final, after topping in the qualification round. Speaking to Anadolu Agency (AA), Onbaşı said this year was very important because she made the switch to the senior category. "This gives me an opportunity to compete in more international and European events. I have new rivals and new challenges and this excites me," she said. She is happy for her "good start" in Portugal but admits it was "unexpected" though she "worked very hard."

The young gymnast says she is still "at the beginning of a long road" adding that strict training and high motivation factored in her success. "My age is also a big advantage and I expect more titles if I can keep my level of training," she added. "My family and friends are very supportive. I am still a high school student and am studying for university admission exams. I have to study and train at the same time. The gymnastics gave me a way of discipline and it helps me juggle studies and training," Onbaşı said. The European championship in Azerbaijan will be a challenge and an opportunity for Onbaşı as she will compete in two different categories, women's and pairs with fellow gymnast Mehmet Ercoş. "I have raised my expectations high and want to reach the finals at least," she said. Mehmet Ali Ekin served as her trainer for eight years and remembers the time they first met. "I saw something in Ayşe Begüm when she was 10. I saw she had a bright future ahead of her," he said. "It is quite an accomplishment to win more than 100 medals at such a young age. She used to compete with her peers but now she has reached the league of giants. It is certainly more difficult, with more challenging moves. She will compete against much older, experienced rivals. Still, she proved herself [in Portugal]. She has a very special skill set and I hope we will see more Turkish gymnasts bringing medals to our country in the future," said Ekin.