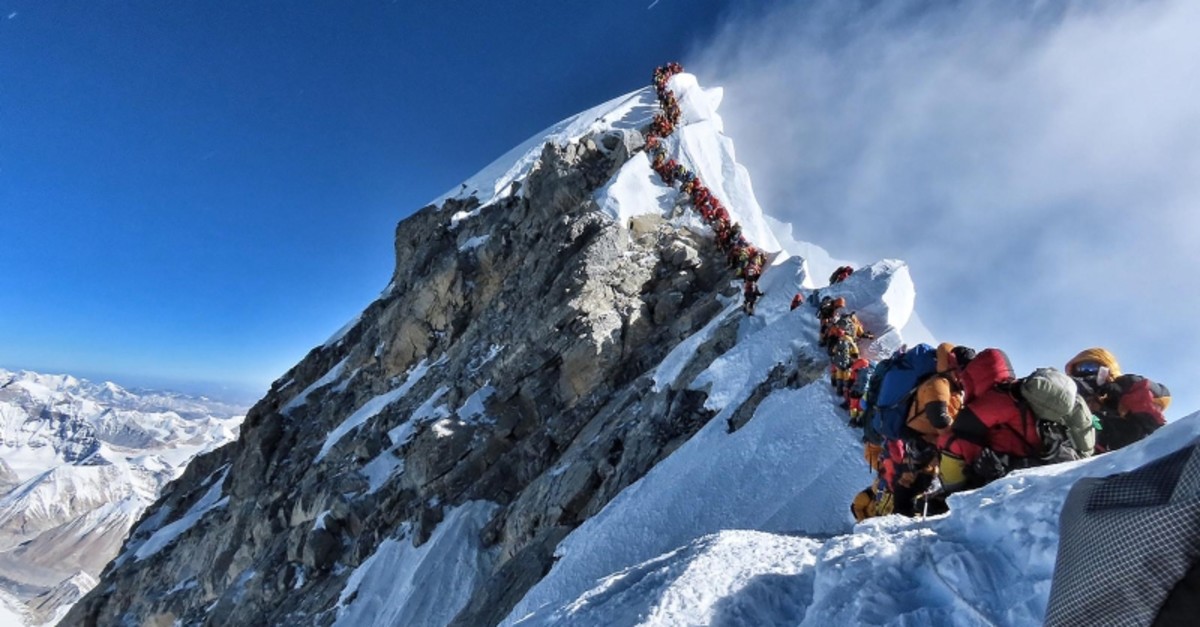 In this file handout photo taken on May 22, 2019 and released by climber Nirmal Purja's Project Possible expedition shows heavy traffic of mountain climbers lining up to stand at the summit of Mount Everest. (AFP Photo)
by Compiled from Wire Services May 24, 2019 6:39 pm

Eighteen mountaineers have died during ongoing spring expeditions in the Himalayas, according to media reports.

Kathmandu-based daily The Himalayan Times reported that two more climbers died on Mount Everest and Mount Makalu on Friday, taking the toll to 18.

The season has witnessed eight deaths on Mount Everest, four on Mount Makalu, three on Mount Kanchenjunga and one each on Mount Lhotse, Mount Annapurna and Mount Cho Oyu to date, the report said.

The climbers died in areas above 8,000 meters.

The deceased include at least nine Indian climbers, the report added.

More than 120 climbers scaled Everest on Thursday, but some of them were caught in the crowd of people on the slopes, leading to exhaustion, dehydration and death, Nepali officials said Friday.

Hiking officials say between five and 10 climbers die on Mount Everest in an average climbing year.

Nepal has issued a record 381 permits costing $11,000 each for the current spring climbing season on Everest, bringing in much-needed money for the impoverished Himalayan country.

But a small window of suitable weather before the short season ends has in recent days triggered bottlenecks of hundreds of climbers wanting to achieve for many – although perhaps not for purists – the ultimate in mountaineering.

Ang Tsering Sherpa, former president of the Nepal Mountaineering Association, said that the weather window to summit this season was narrow, meaning that many teams had to wait to go up.

"Spending a long time above the death zone increases the risk of frostbite, altitude sickness and even death," he said.

The spring season of expeditions starts on March 15 and ends by June 15.

Himalaya Vision Pvt Ltd -- an organizing group for climbers -- said Ing Landgraf (Ernst), 65, from Austria died earlier this week at the Second Step on Mount Everest while he was on his way back from the summit point of the world's highest mountain.

Indian national Nihal Bagwan from Maharashtra died at Camp IV on Mount Everest on the Nepal side after he was rescued by a group of Sherpa climbers from the balcony area. Bagwan was the leader of a two-member expedition.

"He was stuck in the traffic for more than 12 hours and was exhausted. Sherpa guides carried him down to Camp 4 but he breathed his last there," said Keshav Paudel of Peak Promotion.

Kalpana Das, 49, a member of the "Three Women Expedition," died Thursday near the balcony area while descending from the summit point on Mount Everest.

American Donald Lynn Cash from Utah died Wednesday a few meters below the balcony area while returning from the summit point on Mount Everest.

Academic Sean Lawless, 39, from the School of Computer Science and Statistics at Trinity College in Dublin, Ireland, has been missing from the Everest death zone for over a week.