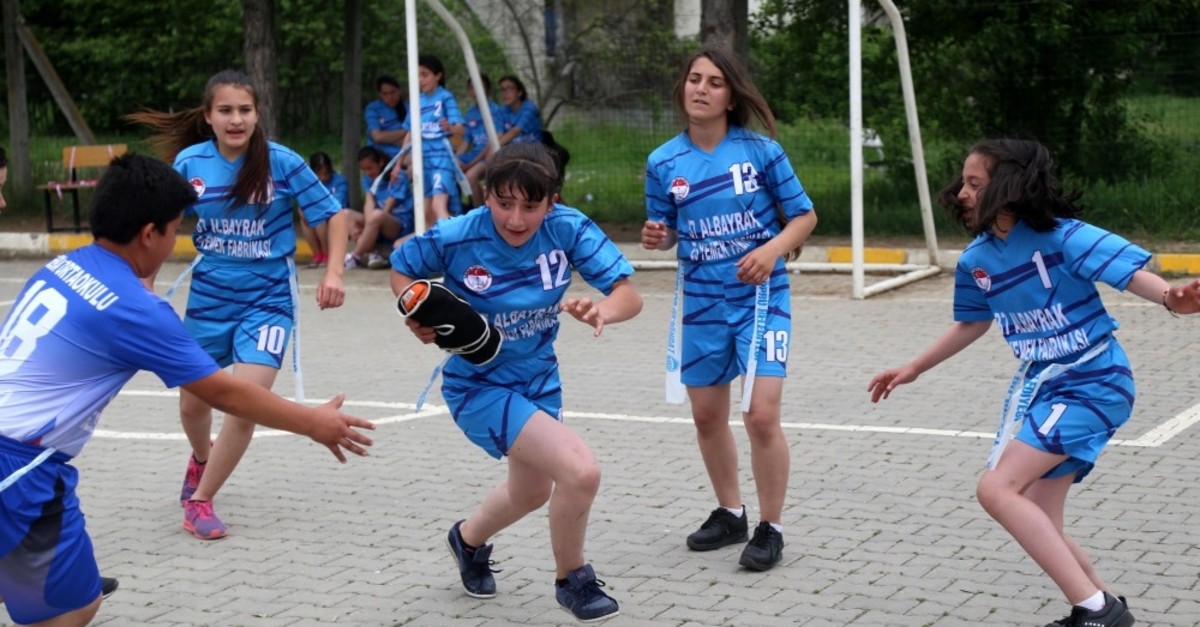 Training with boys their age and a primitive ball they made from a popped basketball, the girls' rugby team at a middle school in Kastamonu overcame odds to win the Turkish championship

The dream of a physical education teacher combined with resolve brought a group of girls the top Turkish title in rugby. The tag rugby team of Seka Middle School in Taşköprü, a town in the northern province of Kastamonu, won a local championship just five months after they were founded.

Sercan Hükümen, a physical education teacher, set up the team last December at the school, and they had no facilities or equipment that professional teams have when they started out. They improvised a rugby ball from a popped basketball, and their training ground was the schoolyard where they could train only during noon breaks. Eleven girls, who all travel daily to the town from surrounding villages to attend the middle school, had determination instead.

Discovering their passion, Hükümen formed another team from male students so the girls could train. Their hard work paid off when they won the School Sports Star Rugby Championship held earlier this month in the province of Samsun, beating more experienced teams from other schools in Turkey. The boys' team founded only to train them did not return empty handed either and secured the fourth spot in the tournament. Hükümen said he was not familiar with rugby before last year, when he heard about it from friends and decided to give it a try. When he introduced it to his students, he saw great interest. Eleven out of 17 female students said they were eager to join, if he'd start a team.

They had most things in place, except equipment and a team to practice with. So, the teacher-turned-coach decided to recruit 11 boys from the school for the girls' training. The girls also had no time to train after school because they had to return to their villages at the end of the day. "We had a 40-minute break at noon. The girls had to have their lunch before they wore their jerseys and trained. So, it was basically 20 minutes of training every day," he said. Another challenge was finding a rugby ball, which was naturally not available in a town without a rugby team. "What we had was a popped basketball. It wasn't quite like a rugby ball, but it resembled one after we wrapped knee protection gear volleyball players wear around the ball. It was the only thing we had, and there were only 15 days until the championship before a relative of a student showed up and donated an authentic rugby ball," the coach said.

The team competes in the tag rugby category, which requires players to wear "tags" around both sides of their waist. As with the ball, tags were not readily available for the team. So, they ended up using "no trespassing" streamers the local municipality uses to put around dangerous sites, as tags. They had access to original rugby tags only one day before the championship.

The girls left Kastamonu, more specifically Taşköprü, for the first time for the tournament, and Hükümen said what he really wanted was "to put a new touch" the lives of the girls. "We weren't there for the title, and we never guessed we'd get this far. I wanted to create a new rugby team. It was beyond my wildest dreams that my team would beat 24 girls' teams to win the championship title," he said.

Sude Ersöz, one of the players, said she had never heard of rugby before. "We didn't have a place to play it anyway even if we had known about it," she said. Ersöz said they saw teams "from big cities" competing in the championship. "We were not intimidated. We just went out and played; I am so happy now, and I want to be a professional rugby player in the future," she said. For now, Ersöz continues studying, playing rugby in her free time, when she has any left after helping her family take care of their crops and animals in the village.