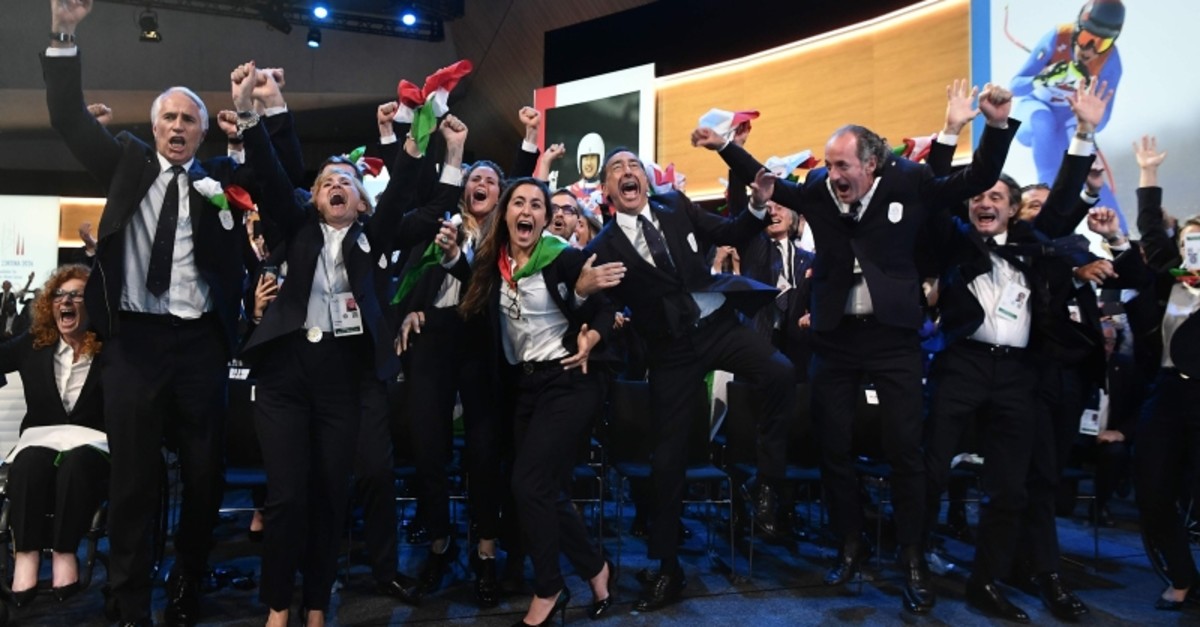 Members of the delegation of Milan/Cortina d'Ampezzo 2026 Winter Olympics candidate city react after the city was elected to host the 2026 Olympic Winter Games during the 134th session of the IOC, in Lausanne. (AFP Photo)
by Associated Press
Jun 24, 2019 7:16 pm

Italy will host the 2026 Olympics in Milan and Cortina d'Ampezzo, taking the Winter Games to the Alpine country for the second time in 20 years.

International Olympic Committee members voted for the long-favored Milan-Cortina bid over Stockholm-Are from Sweden that also included a bobsled track in Latvia.

Milan-Cortina's jubilant delegation broke into chants of "Italia! Italia!" when the result was announced.

Italy last hosted in Turin in 2006, and the Alpine ski resort Cortina previously hosted the Winter Games in 1956.

Sweden's spirited late campaign effort was in vain, including the mayor of Stockholm appealing to voters from the stage by singing a lyric from Abba song 'Dancing Queen'.

Lindberg challenged her colleagues to reward a new kind of creative, cost-effective bid the IOC has said it wanted — "Or is it just talk?"

Both candidates would likely have failed to get this far in previous Olympic bidding contests.

The IOC has relaxed previously strict rules that demanded financial guarantees and government support earlier in the process.

It was an attempt to revive Winter Games bidding with just two candidates on the ballot paper for the second straight time, since Russia spent $51 billion on venues and infrastructure for the 2014 Sochi Olympics.

Now, the IOC seeks to avoid costly new venues — and potential white elephants — while encouraging regions and multi-nation bids to share the load. Hence, Sweden teamed with Latvia, across the Baltic Sea, rather than build its ice sliding sports venue.

"We have budget problems in Italy but I think that this is something that everyone has," Italy Undersecretary of State Giancarlo Giorgetti said at an earlier news conference, citing the wealth of the Lombardy and Veneto provinces underwriting the games costs.

"They are two of the richest provinces in Europe," Giorgetti said. "They certainly have the capacity, they have the readiness, they have the finances in order to be able to support the event."

The IOC will contribute at least $925 million toward Italy's games operating costs of up to $1.7 billion. Building athlete villages in Milan and Stockholm shaped as the main capital investment and most uncertain ventures in the projects.

Last week, the IOC flagged Stockholm's village as a risk, and asked for more details of guarantees underwriting the project.

"A letter of intent is as important to us as any contract," Volvo chairman Carl-Henric Svanberg said in the formal presentation, in what seemed a rebuke to the Olympic body.

The day-long meetings began with each bid in closed-door sessions with IOC members. The Swedish bid was challenged to prove its support from a Stockholm city authority coalition formed last October and a national government only five months ago.

Sweden Prime Minister Stefan Lofven said he assured voters "it's in the Swedish model, it's in our DNA" to deliver a stable Winter Games.

Still, a big plus for the Italian bid — uniting Milan, the Alpine ski resort of Cortina d'Ampezzo, and several towns in between — was the IOC's own polling. It found support from local residents around 85% compared to 60% in Sweden.

The 2026 contest meets the IOC President Thomas Bach's long-stated wish to return to traditional heartlands for winter sports after major construction projects from 2014-2022 in Russia, South Korea, and China.

The signature Swedish feature using the ice sliding sports track in Sigulda, Latvia, that meets the IOC's demand to use established sports venues.

The IOC has praised both candidates for projecting sports budgets "on average 20% lower" than spending on the 2018 Pyeongchang Olympics and 2022 Beijing Olympics.

During the traditionally slick and emotional pleas to be awarded the games, Stockholm mayor Anna Konig Jerlmyr reminded voters of Sweden's most famous music act.

"Abba is everywhere," she said, before singing the lyric: "You can dance, you can dance, having the time of your life."

Sweden's heir to the throne, Crown Princess Victoria, joined a 100-plus delegation at the Swisstech convention center though did not take part on stage.

Sweden's wait for a first Winter Games goes on.