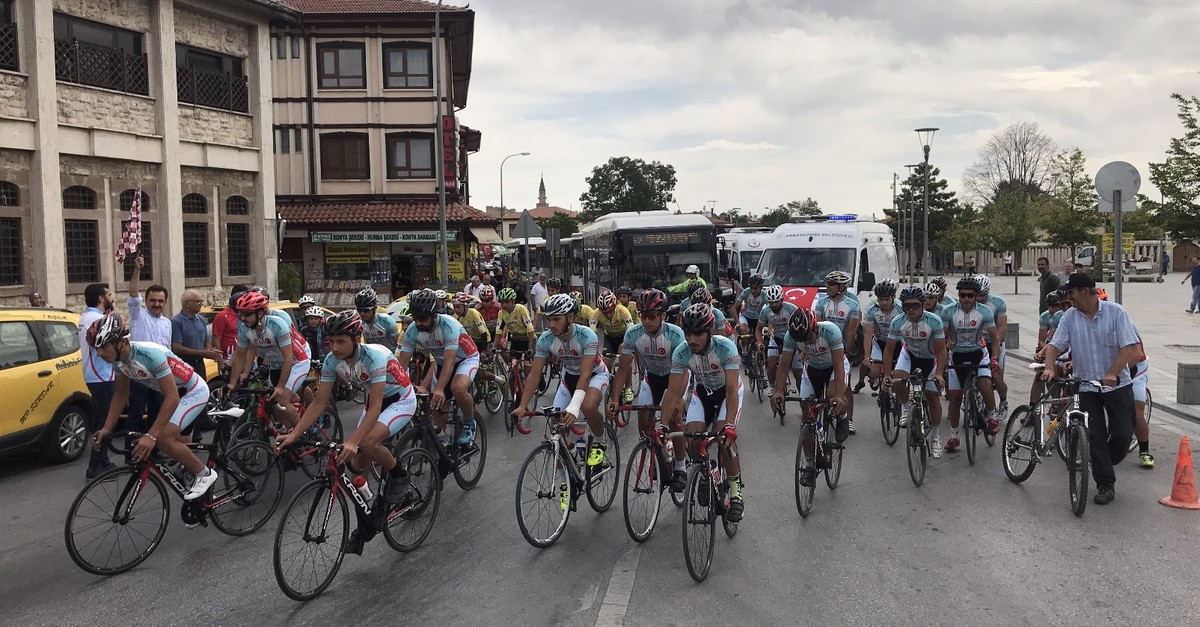 Some 200 cyclists hit the road for Tour of Ömer Halisdemir, an event dedicated to the eponymous anti-coup hero, and are set to reach his hometown where he was buried on the anniversary of the July 15, 2016 coup attempt

The third edition of National Cycling Tour of Ömer Halisdemir, dedicated to the military officer who was killed while fighting putschists during July 15, 2016 coup attempt, is about to end today on the anniversary of the putsch bid.

Cyclists, including 30 professional riders, set out from Istanbul's Arnavutköy district last week. Sponsored by the district municipality and Turkish Cycling Federation, the group aims to remember victims of the coup attempt as well as survivors who earned praise for their resistance against putschists linked to Gülenist Terror Group (FETÖ). The coup attempt killed 251 people and injured 2,200 people and turned into a national epic through the unprecedented resistance of the public and military officers like Halisdemir.

The event started at Arnavutköy Square where people staged rallies for days in "democracy watch," a series of nationwide events to stop a likely second coup attempt and to remember the victims of the putsch bid. Cyclists stopped over in six cities across their 1,100-kilometer route and collected soil which they were scheduled to leave on the grave of Halisdemir in Çukurkuyu, a small town in the central province of Niğde.

Muratcan Öztoprak, a mountain biker for six years is among professional riders joining the event. "It is a very special feeling to pedal in memory of Halisdemir," he says. Baha Sera, who traveled to Istanbul from southern city of Antalya to join the cyclists, has been involved in the event since its inception. "It is a very emotional event and I plan to join again next year. We keep Ömer Halisdemir's memory alive but it is still not enough. He and others gave their lives for this country and we will only sweat along the route," he says.

Ömer Halisdemir, a 42-year-old noncommissioned officer, was serving as an aide to Gen. Zekai Aksakallı, the head of the Army's elite Special Forces Command, at the time of the coup attempt. He was stationed at the Special Forces headquarters on July 15, 2016. Aksakallı was outside and had dodged an attempt by putschists to abduct him. Finding out about the coup attempt and the suspects involved, Aksakallı telephoned Halisdemir and told him to take out Gen. Semih Terzi, a putschist commander who flew in from southeastern Turkey to take over command at Special Forces for the coup plotters. "He simply said 'yes, sir,'" as Aksakallı would later recount the last words Halisdemir said to him in their phone call. Showing up at the entrance of the headquarters armed only with a pistol, Halisdemir fired shots that would kill Terzi. Pro-coup troops accompanying Terzi immediately responded with a barrage of gunshots and Halisdemir died on the spot. Their plan to capture Special Forces, a key unit of military, was thrown into disarray. The putschists were frustrated and ultimately turned themselves in as other anti-coup officers closed in on them.