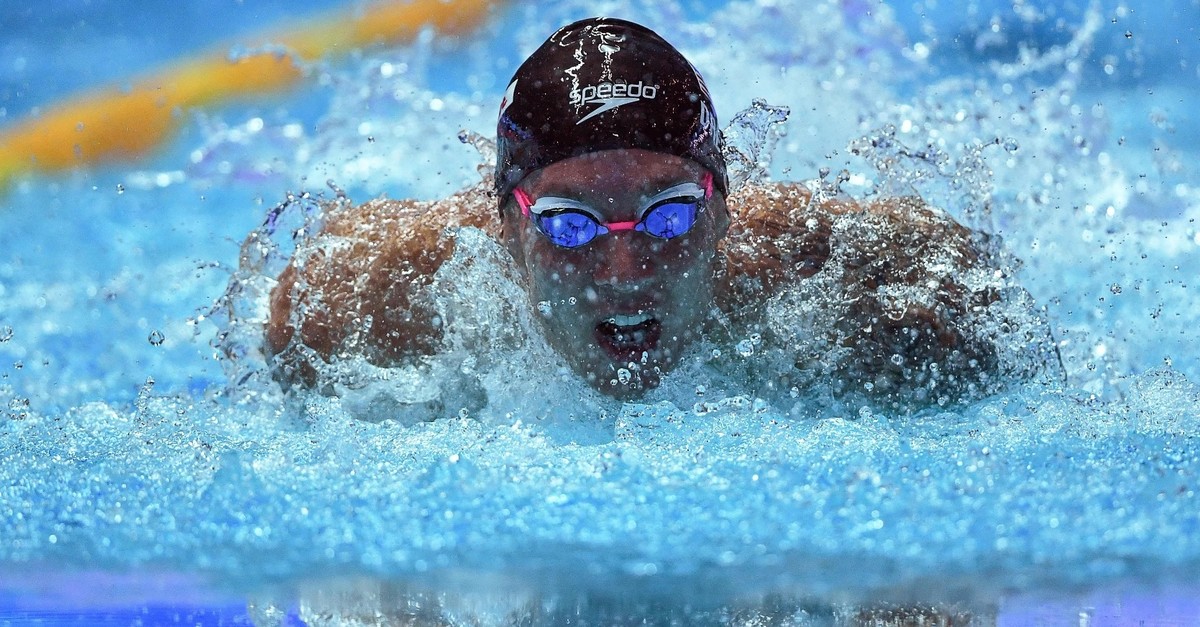 Caeleb Dressel of the U. S. won a record eighth medal at the World Swimming Championships in South Korea yesterday, an event that saw multiple in personal records and historic wins

This time, Caeleb Dressel stands alone. The American won his record eighth medal at the world swimming championships Sunday, helping the U.S. to silver in the 4x100-meter medley relay after anchor Nathan Adrian got overtaken for gold in the closing meters.

"Part of me is very happy," Dressel said. "Part of me wants to cry that I'm done with it. I've got pimples on my face from just the stress of the meet. I'm probably losing some hair." One night after becoming the first swimmer to win three golds in one night at a worlds for the second time, Dressel's haul included six golds at the biggest meet after the Olympics. "It was a very tough week," he said. "I knew I was going to have to come with fire, passion and pride in every single race."

Two years ago in Hungary, Dressel tied Michael Phelps' record of seven golds at a single worlds, including three in one night.

Dressel hauled the U.S. from fourth to first on his butterfly leg with a split of 49.28 seconds. Adrian found himself in a three-way fight with Britain and Russia coming down the stretch.

Brit Duncan Scott surged ahead approaching the wall and got there first with a split of 46.14 to Adrian's 47.60. "That last 15 meters, it's tough," Adrian said. "I was trying to be strong, I was trying to hold on, but this time I couldn't do it." Luke Greenbank, Adam Peaty, James Guy and Scott took gold for Britain in 3 minutes, 28.10 seconds.

Ryan Murphy, Andrew Wilson, Dressel and Adrian finished in 3:28.45. It was just the second silver, and first since 1998, in an event the Americans have won 13 times. "There's a time to get silver in relays and it's at a world championships, that's for sure," Adrian said. Russia earned bronze.

MALE SWIMMER OF THE MEET

"He's a phenomenal talent," South Africa's Chad le Clos said. "He seems to get better throughout the days."

The U.S. team finished atop the medals table with 27, including a leading 14 golds.

Australia was second with 19 and five golds. Simone Manuel completed a sweep of the 50 and 100 freestyles, the first American woman to achieve the feat. She won four golds and six medals overall in the eight-day competition. She came back later to anchor the U.S. to an easy victory in the 4x100 medley relay. Regan Smith, Lilly King, Kelsi Dahlia and Manuel won in 3:50.40, lowering the mark of 3:51.55 set two years ago in Hungary. Manuel outdid Australia's Cate Campbell on the final leg, with the Americans winning by 3.02 seconds. Smith set a world record of 57.57 on her opening 100 backstroke leg. She won the 200 back in world-record time, too, but didn't qualify in the individual 100 back. "That really pumped us all up," Manuel said. The Aussies settled for silver and Canada took bronze. In the 50 free, Manuel raced one length of the pool in 24.05. She held off Sarah Sjostrom of Sweden, who took silver in 24.07, and Campbell, who earned bronze in 24.11. In the 100 free, Manuel topped Campbell and Sjostrom finished third. Manuel's other medals came in relays: gold in the 4x100 medley and mixed 4x100 free, and silvers in the 4x100 free and 4x200 free.

Sjostrom made a mark of her own. She became the first woman to win five medals in individual events at a single worlds. She won the 50 butterfly, silvers in the 100 fly and 50 free, and bronzes in the 100 free and 200 free, and earned FINA female swimmer of the meet.

Lilly King won the 50 breaststroke, giving the American two victories over Russian rival Yuliya Efimova. They were denied a third meeting when King was disqualified in the heats of the 200 breast for not putting both her hands on the wall at the same time in a turn. King touched in 29.84, the only swimmer under 30 seconds in the final. Benedetta Pilato, a 14-year-old Italian, earned a surprise silver in 30 seconds flat and reacted by crying. Efimova, who won the 200 and finished second to King in the 100, settled for bronze in 30.15.

Katinka Hosszu of Hungary extended her domination of the 400 individual medley, becoming the first woman to win five titles in one event. She swam the four-stroke race in 4:30.39 seconds. "I wanted to celebrate after the race, but I couldn't move my arms," an exhausted Hosszu said.

Ye Shiwen of China took silver, just as she did behind Hosszu in the 200 IM. Yui Ohashi of Japan claimed bronze.

Florian Wellbrock of Germany made history with his victory in the 1,500 freestyle.

With his earlier win in the 10-kilometer open water race, Wellbrock became the first swimmer to win golds in two sports at a single world championships. He pulled away going into the final turn to win in 14:36.54.