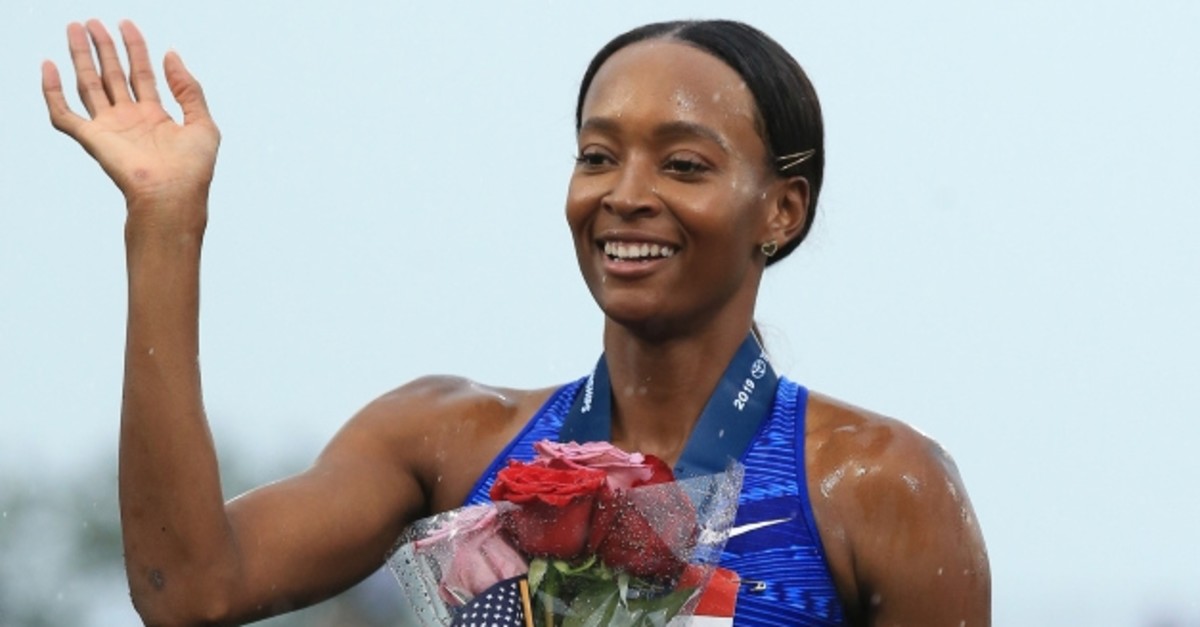 Muhammad, who suffered a concussion after a fall during training two weeks ago, says she already broke the record in training.
by Jul 30, 2019 12:15 am

U.S. athlete Dalilah Muhammad set the bar higher in 400 meters hurdles with a new world record of 52.20 seconds at the U.S. championships

Olympic champion Dalilah Muhammad smashed one of athletics' oldest world records when she stormed to the women's 400 metres hurdles title in 52.20 seconds at the United States championships in Iowa on Sunday.

The blistering run shaved more than a tenth of a second from the previous mark of 52.34 seconds set by Russian Yuliya Pechonkina in 2003.

"I'm just shocked," said the 29-year-old Muhammad, who suffered concussion after a fall during training two weeks ago. "I've been kind of hitting that time in practice consistently and my coach was like, 'There's no way you can't do it'."

Teenager Sydney McLaughlin was second in 52.88, just 0.13 shy of her personal best, with Ashley Spencer third in 53.11, as all three runners made the U.S. team for September's world championships in Doha.

The record could fall again there, said Muhammad, who trains in Los Angeles. "That 52 is going to get broke," Muhammad said. "If not by me by the other women."

The first American Olympic gold medallist in the event, she had entered the American championships with a personal best of 52.64 seconds. Twice a world silver medallist but never the champion, she went out hard in the final and was clearly the leader by the final straight. She smiled, put her hands on her hips and slumped down after crossing the finish line.

Despite her Olympic gold medal, Muhammad had been overshadowed by the rapidly improving McLaughlin since the Rio Games. In fact, many had expected McLaughlin, who went to the Rio Olympics as a 17-year-old, would be the to break the world record. Asked if she thought she was underrated with all the attention McLaughlin had received, Muhammad said, "I do." "I felt like the underdog in the race," she said. "It definitely kept me humble this year, and even motivated me more."

The stunning record overshadowed what had been expected to the highlight of the closing day of the four-day meeting: 100 metres winner Christian Coleman challenging wunderkind Noah Lyles in the 200 metres.

Lyles, the fastest man at the distance since Usain Bolt won the Olympics gold in 2012, got the victory in 19.78 seconds with Coleman running 20.02 to make the world championships in a second event. The two were side-by-side before Lyles pulled away in the last 60 metres. "Tons of joy," said Lyles, who danced down the track after winning. "This is the hardest team to make, and the saying is, once you make the U.S. team, you better come away with a medal." The odds are that the medal will be gold after his superb 19.50 seconds clocking in Lausanne.

The women's race went to Dezerea Bryant in 22.47 seconds.

Craig Engels edged Olympic champion Matthew Centrowitz in the men's 1,500m by four-hundredths of a second, winning in 3:44.93.

The men's 110m hurdles was the reverse of the U.S. collegiate final with Daniel Roberts winning over Grant Holloway in 13.23. Holloway clocked 13.36.

World champion Emma Coburn won her sixth consecutive U.S. 3,000m steeplechase title in 9:25.63 and Lopez Lomong used a late surge to defeat Olympic 5,000m silver medallist Paul Chelimo and claim his second title of the meet after winning the 10,000. Lomong will not be doubling up in the 5,000 and 10,000 at Doha, however, because he lacks the standard in the shorter distance.