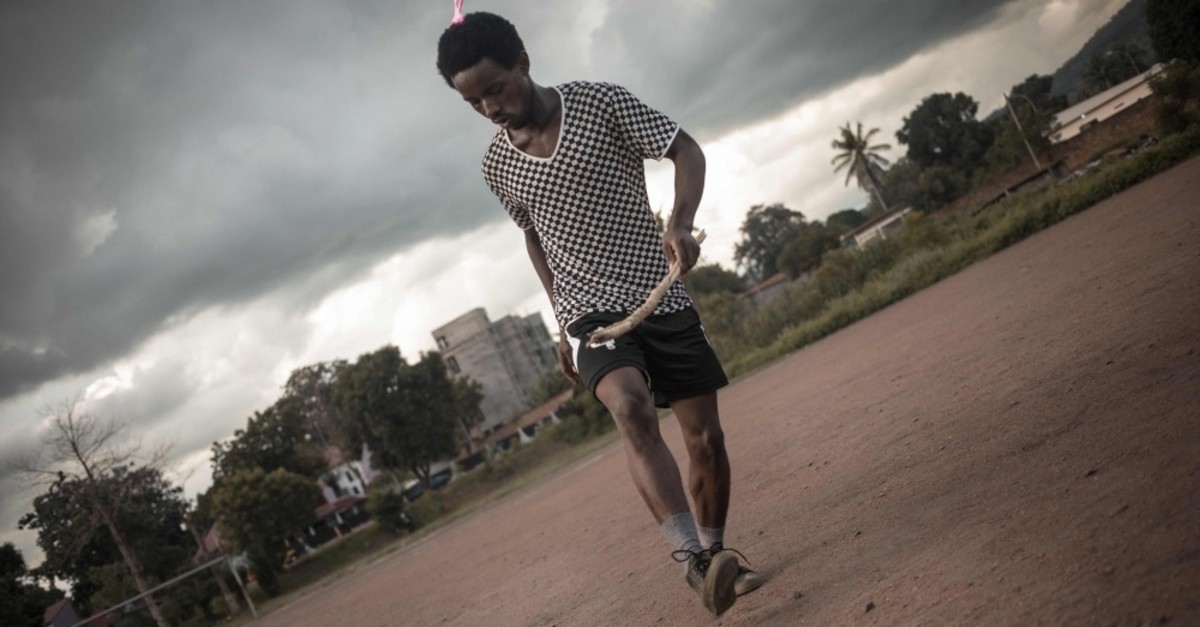 For the first time in years, the Central African Republic witnessed a match of Ngbaba on a sports field at the University of Bangui, in a revival of an old tradition.

Two teams confronted each other on the dusty sports field, wielding roughly cut sticks to whack a homemade puck at high speed. For the middle-aged and beyond, the sight of this rugged game triggered distant memories, of happier times. The sport, known as ngbaba, is unique to the Central African Republic (CAR) – and, almost like the embattled country itself, has been hauled back from near-death. Once played widely in streets and villages, ngbaba – pronounced "g'baba" – has simple rules and requires speed, dexterity and a dose of fearlessness. Players hew a thin stick, roughly about as long as their arm and slightly curved at the end, and use it to hit a puck carved out of an old pair of rubber sandals.

If the puck lands in the opposing side of the pitch, the other team has to make sure that they get to it quickly to keep it moving and hit it back over to the other side.

The aim is to avoid the puck stopping face down in your half of the pitch.

At this match, played on a sports field at the University of Bangui, the challenges and skills of ngbaba were on clear display.

To reach the puck in time requires lightning sharp reflexes, and it takes quick thinking and team coordination to mount a counterattack.

"It's years since we've seen this," exclaimed Terrence, 31, as he prepared to take to the field. "It brings back good memories for everyone."

Jean, a student kicking his heels in the shade of the mango trees as he waited his turn to play, said ngbaba belonged to the time before social networking and mobile phones.

"In the old days, young people only had ngbaba for leisure," he said.

Sonek Langate, head of the Baila association that has launched ngbaba's rebirth, said, "Every time we organize a match, everyone wants to take part."

"We have to revive this game, especially among the young generation. We have a culture and we should value it."

Ngbaba is played only in the CAR, one of the poorest, most war-ravaged countries in Africa.

But how it began is unclear.

Neither players nor spectators at the match had any idea, nor did a local history professor.

Michel, a gnarled old man who is the university archives watchman, recalled that "it was already being played in the 1970s."

His theory: the sport developed from children who watched western sports on TV after the CAR began to get television.

The idea is tempting, given the clear similarity with megasports like ice hockey and baseball. Yet games using sticks and a ball or other object have a history that long predates these modern sports – and some speculate that ngbaba's roots may be much older.

"It was part of the initiation rites among certain tribes," Langate suggested. "You can find variations of it in the Democratic Republic of Congo and Cameroon." If so, ngbaba clearly meets some of the needs of typical rites to celebrate the passage into manhood, such as endurance and bonding. The whizzing puck can cause painful injuries and confrontation also brings rivals together. "It's not a sport for softies," said Terrence, dripping with sweat as he came off the field.Ngbaba is also a "driver of peace and social cohesion," Langate argued.

"In the old days, young people would challenge kids in other neighborhoods to a match – it helped them to get to know each other and make friends."

But at the start of the century, ngbaba's fortunes began a downward spiral. Like so many other aspects of life in the CAR, it became a victim of the unrest that broke out among the country's mosaic of ethnic and religious groups.

"People became afraid of going into other neighborhoods," Langate said, adding that parents took to banning their children from playing it, fearing violence and eye injuries.

In 2003, former president Francois Bozize seized power in a coup, and in 2013 was himself overthrown, and since then, much of the country has been at the mercy of armed groups trying to control gold, diamond and oil deposits.

In February, Bozize's elected successor, Faustin-Archange Touadera, signed a peace deal with 14 militias who still control more than three-quarters of the territory.

The agreement is the 13th in a decade and violations have been many. But in the past few months, the country's roads and the streets of the capital have been relatively calm, enabling Baila to set up matches between neighborhoods.

Many hurdles lie ahead before ngbaba recovers its former glory.

"These days, young people prefer to play football or basketball, because they have a better chance of making a living from those sports," said Jean, the student.

"What we need is a professional federation."

Joel Nacka, a CAR businessman who lives in France, the former colonial power, has his eyes on that very goal. He is hunting for sponsors and, more distantly, believes that the sport can be exported. "A sport that we give to the world – what better way to give a different image of our country," he said.