Ethnosports Festival, a celebration of culture and sports, kicks off 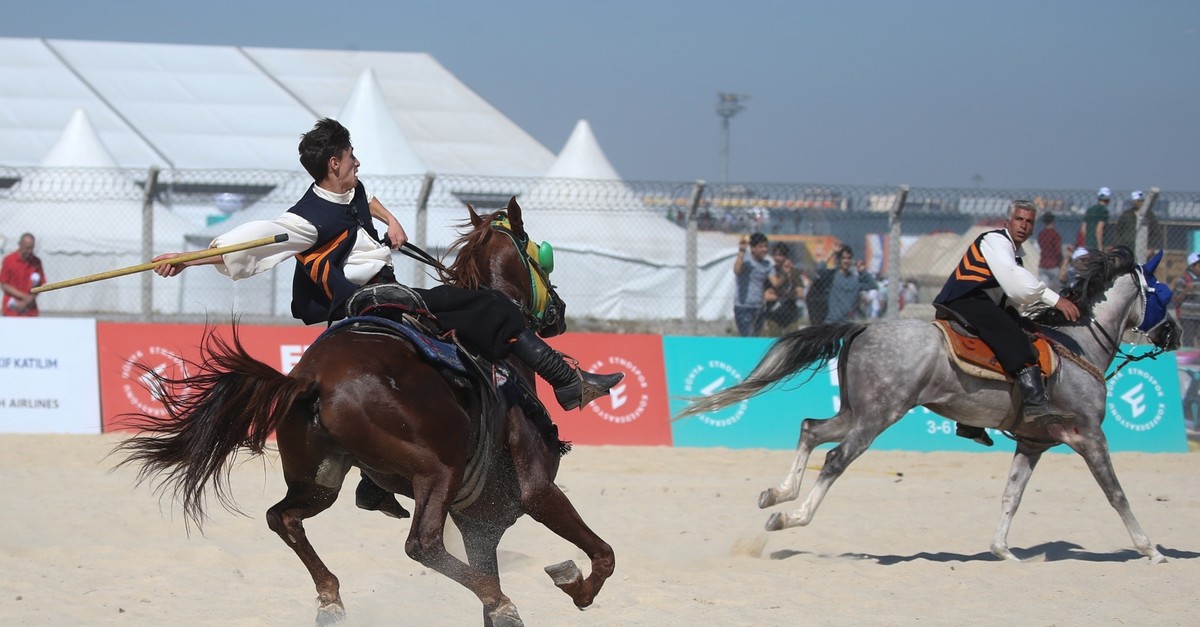 The festival will host mounted archery, mounted javelin and other sports competitions as well as cultural activities like folk dances.
by Daily Sabah Oct 04, 2019 12:16 am

The Ethnosports Culture Festival, which offers visitors a chance to watch ancient sports from around the world and get a taste of different cultures, began in Istanbul yesterday

The fourth edition of the Ethnosports Culture Festival opened yesterday at Istanbul's Atatürk Airport. The festival, a celebration of multiple traditions, cultures and ethnic sports, will host wrestlers, archers and other ancient sport performers from around the world for four days. The festival's motto is based on an old Turkish saying, "Pilavdan dönenin kaşığı kırılsın" which translates to "Come hell or high water" - symbolizing determination and resolve against all odds. The organizers expect a turnout of about 1 million visitors this year.

Participants from 16 countries, including this year's guest country Argentina, will compete in 12 ancient sports from oil wrestling to traditional archery. One of the main events is Fetih (Conquest) Oil Wrestling where 300 wrestlers will try to put each other's backs on the ground in traditional Turkish sports. 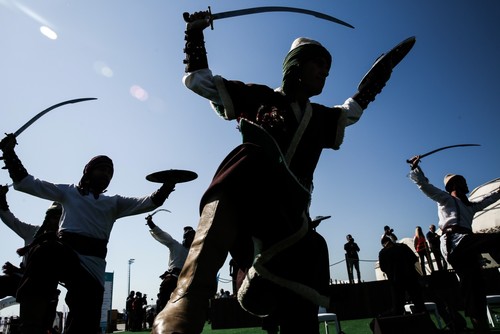 Along with sports, the festival will host more than 50 workshops to promote cultures of participating countries where handicrafts of each country as well as samples from their cuisine will be introduced to the visitors. Visitors will also have a chance to ride horses and ponies brought in for adults and children. This year's guests also include football stars who will try their hand in archery. Radamel Falcao and Fernando Muslera of Galatasaray, and Fenerbahçe's Emre Belözoğlu and Vedat Muriqi are among the footballers visiting the festival. 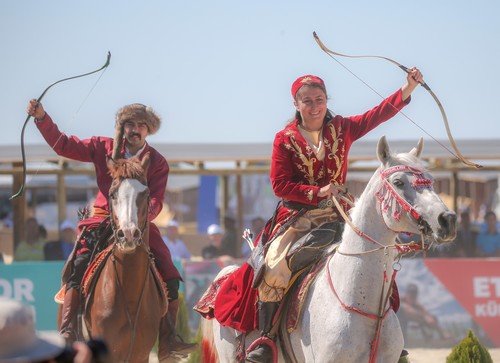 Elsewhere, teams from participating countries will reenact their cultural customs, from a wedding ceremony to musical events and folk dance performances. Organizers set up tents in the shape of Central Asia's traditional yurts at the venue for sideline events. Children will have the opportunity to play traditional games peculiar to Turkey and other participating countries, while trainers will offer brief training for children in archery and horseback riding. The festival is the brainchild of the World Ethnosports Confederation led by Bilal Erdoğan, son of President Recep Tayyip Erdoğan. With the festival, the Istanbul-based World Ethnosports Confederation aims to promote traditional culture and sports against what organizers call the industrialization of sports. The confederation, an umbrella body for 18 federations from seven countries, has staged the event since 2016. Last year, more than 1 million people visited the festival.

Speaking at the opening ceremony of the festival, Bilal Erdoğan said countries needed to reclaim their culture and traditions for their future. "Otherwise, we face the danger of losing our cultural identity and our strong sides," he said. He said the festival's purpose was to promote culture and traditional sports, especially for the children and the youth.

Here are some games and sports featured at the festival: Gökbörü

Gökbörü, or kökbörü, is a traditional equestrian sport of Central Asia. Traditionally, the game was played during wedding ceremonies and local festivals and has managed to survive under the name "catching the prize" in certain regions of Anatolia. The goal of this game is to catch a runaway goat on horseback. The riders take their positions in a defined circular play area and ride their horses towards the goat, called a "şikar," and try to grab the goat by sliding sideways in their saddles. The rider that catches the goat flees from the other riders as they try to snatch the goat from him. If the rider manages to ride a full circle around the play area with the goat, he scores and puts down the goat. Another rider catches the goat and the game goes on. The rider who scores the most points wins.

Belt wrestling is a popular game among Crimean Turks and is performed on soft soil or in a green field accompanied by drums and a clarion similar to other types of wrestling. Belt wrestling matches take place for entertainment, and the wrestlers are categorized in three groups according to their height and weight. Each wrestler tries to put his opponent's shoulders on the ground by pulling him by the belt that is wrapped around his opponent's waist.

Aba wrestling is one of the oldest wrestling types in Central Asia. The wrestlers wear an "aba," a coarse woolen cloth, and wrap special belts around their waist before they wrestle. This ancient sport is still practiced in Turkey's southeastern provinces of Gaziantep and Hatay; however, it technically varies from region to region. Aba wrestling is believed to be the first example of judo and pants wrestling in Sweden as aba wrestling is the world's first known wrestling type performed with clothes.

Mounted javelin is an ancestral Turkish sport, originating in Central Asia, and has been played for centuries. The game was created for mounted warfare practice, but nowadays is mostly played for show. The javelin thrower throws the javelin at his opponent, while the mounted opponent makes precise moves on horseback to avoid the javelin. Some sportsmen follow their opponents until they get a good line of sight and then throw their javelin. If they hit their target, they score. The scoring is determined by the sportsmen prior to the game.

The history of mounted archery goes back centuries among the Turks. Throughout history, Turkish mounted archers were known for their ability to turn and shoot their arrows while riding. In the past, hunting was the main source of income and livelihood for many, and warfare helped Turkish mounted archery improve. Aside from its importance in warfare and hunting, archery was also significant in Turkish society. For instance, archery competitions often took place during national holidays, religious ceremonies and weddings.

Mangala is a mind and strategy game that influenced a large region, from the tribes in Central Asia to the Ottomans. The most important feature of the game is that it can be played by people of every age and that the players are not restricted by place or materials. The game is played by two players with 48 stones on a 2-by-6 or 2-by-7 mangala board or in small pits. For setup, five pieces are placed in each pit. On a turn, the player takes all the pieces from one of his or her pits and drops them one at a time into the following pits counterclockwise. The game ends when all the pits are empty. The player who captures at least 25 pieces wins the game. Vision, patience, planning and a cunning mind are required to win this game of strategy.

This national sport of Argentina will be featured in the festival for the first time this year. A blend of polo and basketball dating back to the 17th century, pato literally means duck in Spanish, referring to live ducks used as "ball" in the original version of the sport. Today, a ball with six handles are used instead. Players, four in each two teams, mount horses and try to reach the opposing end of a field and toss the ball through a hoop to score points.