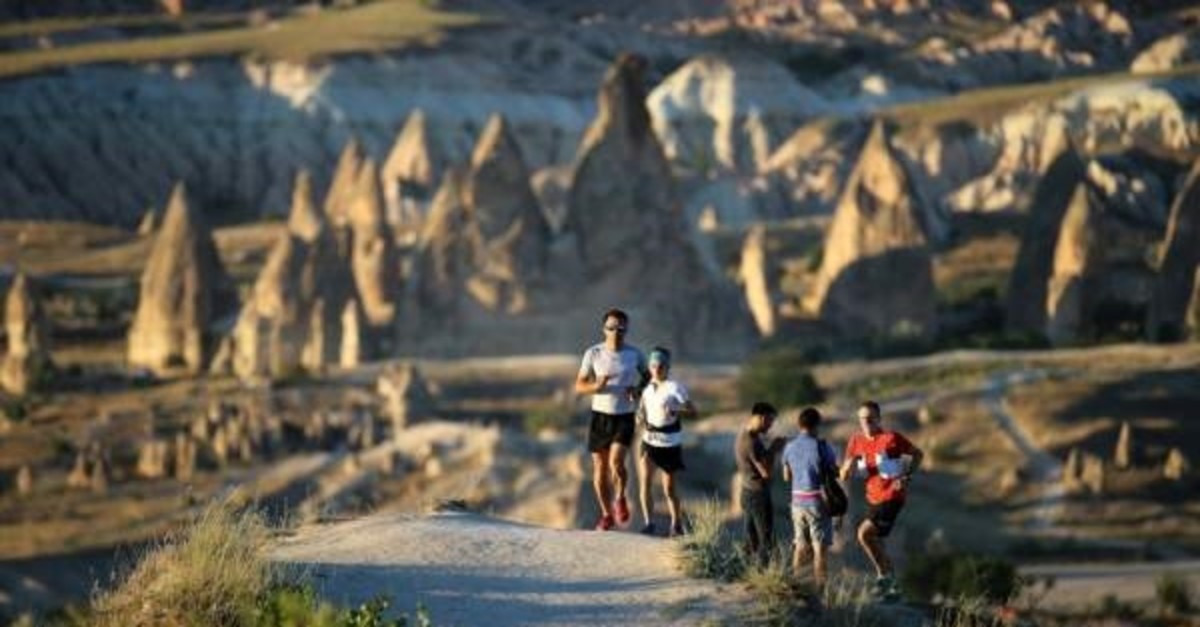 The Salomon Cappadocia Ultra-Trail race is scheduled to kick off on Oct. 19. u0130HA
by Anadolu Agency Oct 14, 2019 1:14 am
A trail race in Turkey's splendid Cappadocia region is expecting a 50% rise in the number of runners this year.
Nearly 3,000 runners from 80 countries are expected to take part in the sixth edition of the Salomon Cappadocia Ultra-Trail on Oct. 19-20. The footrace will feature three categories: The 119-kilometer (74-mile) race with a variation in altitude of 3,730 meters, the 63K race with a variation of 2,030 meters, and the 38K race with a variation of 1,120 meters.
It will take runners through plateaus, valleys and hills overlooking the unique "fairy chimney" volcanic cones of Cappadocia, listed as a UNESCO World Heritage site.
Cappadocia is also famous for its colorful fresco paintings covering underground cities, boutique hotels, houses carved into rocks, rock churches, chapels and shelters used by early Christians. Starting in the city center of Ürgüp, competitors will have to carry safety equipment during the 24-hour marathon.
The Salomon Cappadocia Ultra-Trail is part of the Ultra-Trail World Tour and is also a qualifying race for the Ultra Trail du Mont Blanc (UTMB) and Western States Endurance Run (WSER). The 119K race has 10 aid-stations along the route, the 63K has five and the 38K has two.
Australian Lou Clifton, the runner-up of Ultra-Trail Mt. Fuji 165K (102-mile) in the women's category, Briton athlete Jo Meek, Mehmet Soyturk from Team Salomon Running Turkey, and winners of the previous years Elena Polyakova and Kemal Kukul are among the top competitors.
Last Update: Dec 20, 2019 1:03 am
RELATED TOPICS