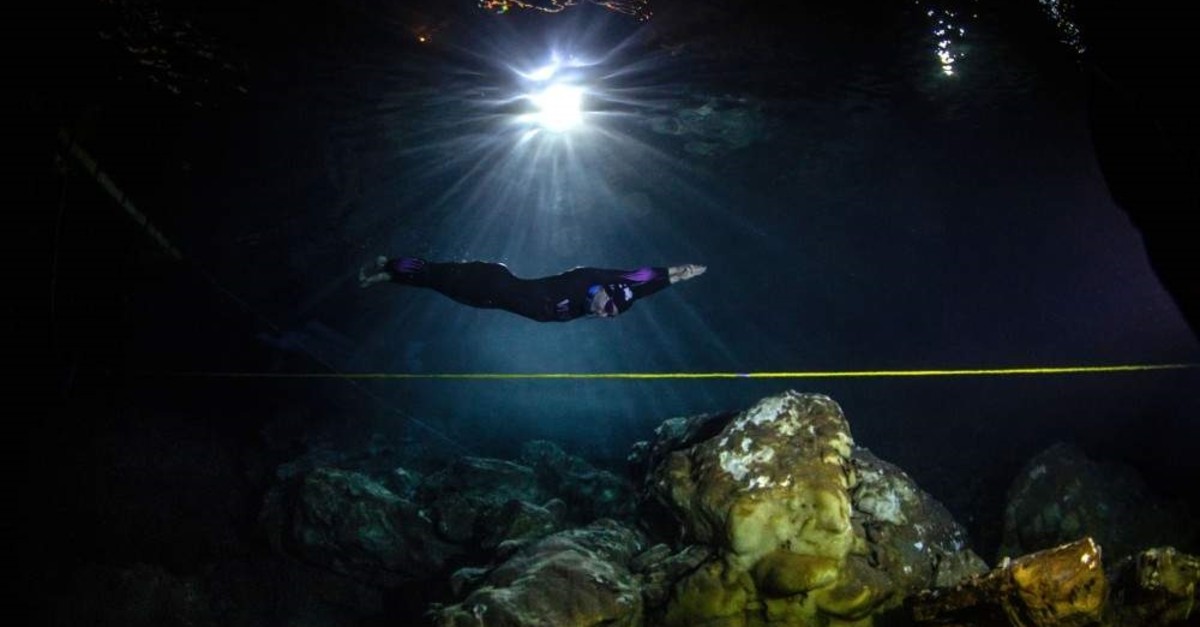 Multiple world record holder and one of Turkey’s most famous free divers, Şahika Ercümen has set her eyes on breaking a cave diving world record.
Ercümen will attempt Monday to break the 90-meter women's cave diving (without fins) world record at the Gilindire Cave in Aydıncık, a town in southern Turkey's Mersin.
The 34-year-old diver trained for the record attempt at a swimming pool in Mersin before she started training in the cave itself.
The cave was discovered by a shepherd in 1999 and dates back to the Ice Age. Speaking to Anadolu Agency (AA) on Friday, Ercümen said she wanted to break the record and dedicate it to “Mehmetçik,” an affectionate name for Turkish soldiers.
Turkish athletes and soccer players have made the headlines recently when they made military salutes in international competitions as a tribute to soldiers who were carrying out a risky counterterrorism operation in Syria.
Ercümen says the attempt will be “extraordinary” and the idea was conceived some nine years ago. “I want to take the record to 100 meters,” she confidently says, though she acknowledges the challenges. “It will be very difficult. Water temperature and the air inside are very, very different than environments [I am used to diving in]. You can’t breathe easily and for severe asthma patients, it is impossible to enter into the cave. There are several obstacles for me but I try to overcome them by training here,” she says.
Ercümen regularly dives deeper into the huge pool. “My world records are mostly in vertical categories and at sea. It is the first time that I will try it inside a cave. I will push my limits by diving without fins and horizontally. This is not my expertise but I will give all my strength and do my best,” she added.
An asthma patient in her childhood, Ercümen went on to break and set several records, including the women’s freshwater free-diving world record last year when she dived 65 meters in 1 minute and 58 seconds without fins.
“I am a national athlete, so I need to break records and wave the Turkish flag. Our country has very good divers and very good facilities. I will do my best,” she said.
She says she also wanted to promote the cave to the world. "This is a very special place in Turkey. We should promote it to the world. You go deep under the land and come across a beautiful body of water. It is like a mirage and underwater visibility is very good."