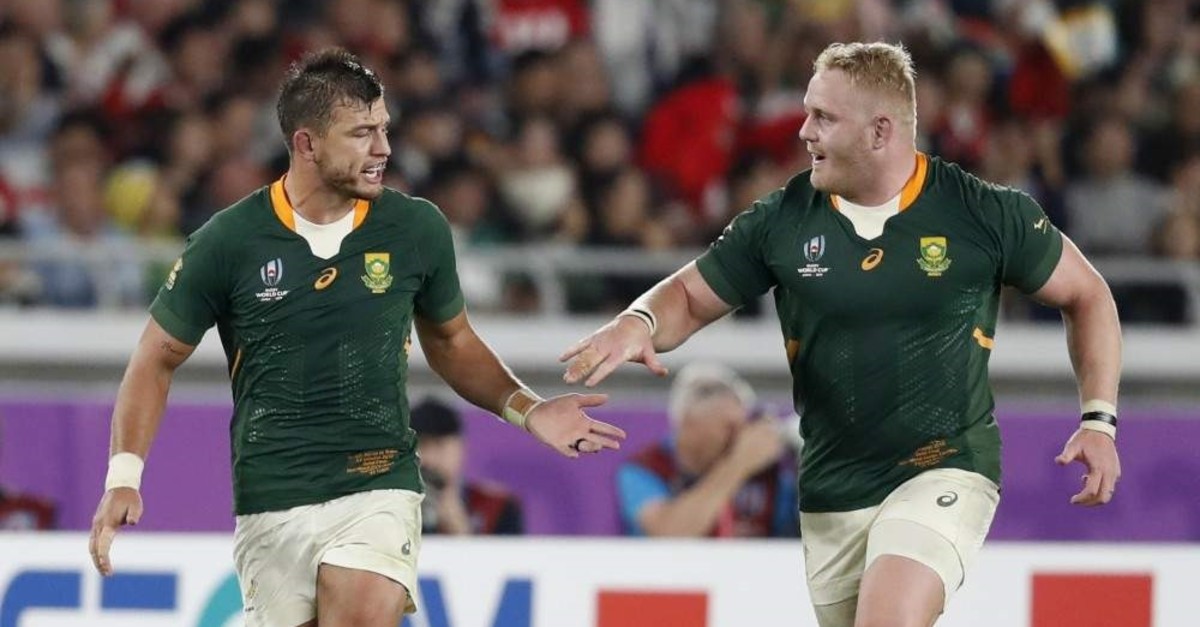 South Africa's Handre Pollard (L) celebrates after kicking a penalty, Yokohama, Oct. 27, 2019. (Reuters Photo)
by reuters Oct 27, 2019 4:06 pm
Springboks flyhalf Handre Pollard kicked a penalty four minutes from time to send South Africa into their third Rugby World Cup final with a 19-16 victory over Wales in a semi-final dogfight on Sunday.
The South Africans will return to Yokohama next weekend to bid for a third World Cup triumph against an England side who ran defending champions New Zealand out of the tournament with a breathtaking display of rugby on Saturday.
This was the other side of the game, a largely grim arm-wrestle dominated by the boot and appropriately settled by a three-pointer from the kicking tee. Pollard potted all five of his shots at goal, including three other penalties and a conversion, while center Damian de Allende crossed for the game's first try in the 57th minute. Wales, who will depart heartbroken at having lost a third World Cup semi-final, leveled the scores at 16-16 with 15 minutes remaining when winger Josh Adams crossed for his sixth try of the tournament. South Africa would not be denied, however, and secured their passage to the final when Pollard calmly slotted the ball through the posts from about 30 meters out wide to the left. An chilly autumn wind had blown away the last remains of a balmy day just after kickoff but that did not deter both sides from going to the skies from the start of the gritty contest. South Africa's set piece looked the steadier but Wales were getting past the Springboks' rush defense on the left wing and looked the more likely to cross if the game was ever going to produce a try. In the absence of any other enterprise,
Pollard and Dan Biggar reprised their flyhalf penalty-kicking duel of the 2015 quarter-final with the South African coming out on top, as he did four years ago, to send his side into halftime 9-6 ahead. The Welsh suffered a double injury blow just before the break that did not augur well for an attritional chess game, however, with prop Tom Francis damaging his shoulder and winger George North pulling up clutching his hamstring strain. Biggar stepped up to kick his third penalty to tie up the scores six minutes into the second half but the biggest cheer from the crowd until that point came when Springboks scrumhalf Faf de Klerk squared up to towering Wales lock Jake Ball. The South Africans in the stadium finally had something to shout about approaching the hour mark when Pollard for once eschewed the kick and cut through the defensive line to take the Springboks deep into the Welsh 22. With the referee playing advantage, the ball came out to de Allende who brushed off two tacklers and reached over to touch down in the grasp of a third. Wales hit straight back, however, camping on the South African line, taking a five-meter scrum when awarded a penalty then quickly moving the ball out to the wing for Adams to score. Fullback Leigh Halfpenny split the uprights from wide to level up the scores but South Africa's forwards did enough to ensure Pollard had his chance to win it.
Last Update: Dec 20, 2019 1:16 am
RELATED TOPICS