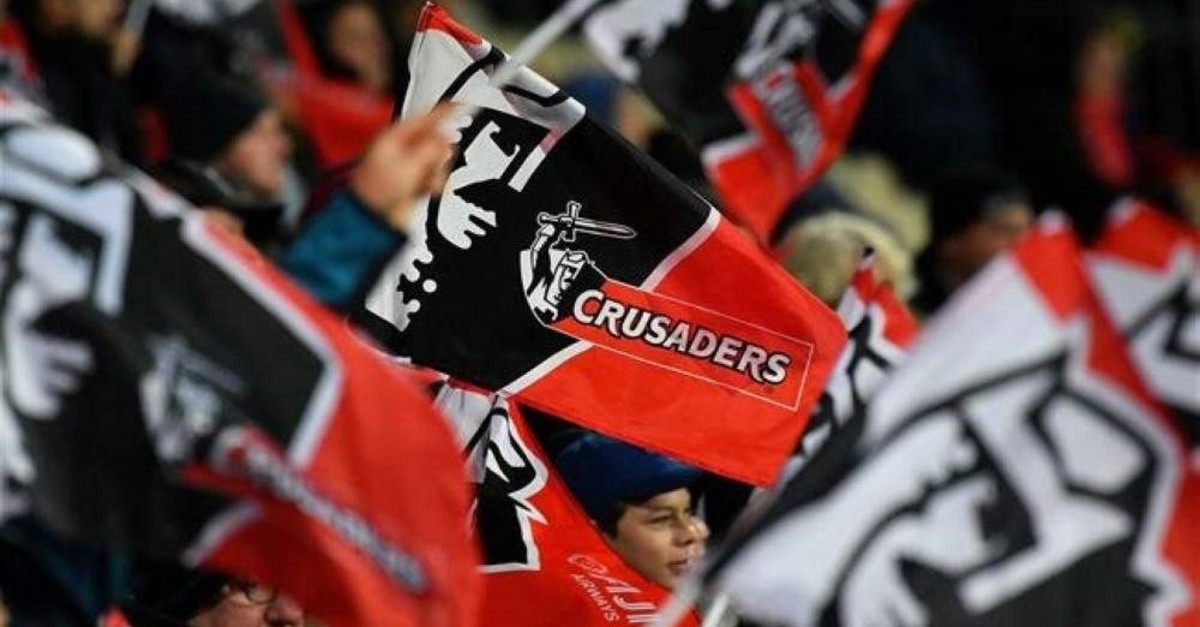 Crusaders fans celebrate during a match at their home stadium in Christchurch. (AFP Photo)
by Nov 29, 2019 5:19 pm
New Zealand's Canterbury Crusaders announced Friday that the team will retain its name but change its logo after a review sparked by the deadly mosque shootings in its home city of Christchurch in March.
Critics said the name and branding referencing medieval wars between Christians and Muslims were inappropriate after the attacks, in which 51 Muslims died in attacks allegedly carried out by a self-declared white supremacist.
Immediately after the killings, the Super Rugby giants stopped parading chain-mailed knights on horseback as prematch entertainment at home games, and indicated the team logo of a sword-wielding crusader would be phased out.
But there was resistance among fans to changing the name of arguably the world's most successful club rugby side, with a record tally of 10 Super Rugby titles, three of them won in the past three years.
The club said the review released Friday concluded that the name would stay, but that it would adopt the meaning of crusading for good, rather than the war-like meaning of the term.
The new logo is a Maori tohu, or symbol, resembling a stylized letter 'C' in the club colors of red and black.
"Ultimately, it was decided that no name better represented the club's commitment to living its values – crusading for social improvement and inclusiveness, and crusading with heart for our community and for each other – than Crusaders," chief executive Colin Mansbridge said.
The club will begin using the new logo immediately but it will not make an on-field debut until 2021, with next year's kits simply carrying the Crusaders' name.
Similar debates have raged in the United States over the names of sports teams with Native American associations, such as the Washington Redskins, Atlanta Braves and Cleveland Indians.
In 1997, the Washington Bullets basketball team became the Washington Wizards because then owner Abe Pollin did not want the side to have a name linked to violence.
Last Update: Dec 20, 2019 2:00 am
RELATED TOPICS