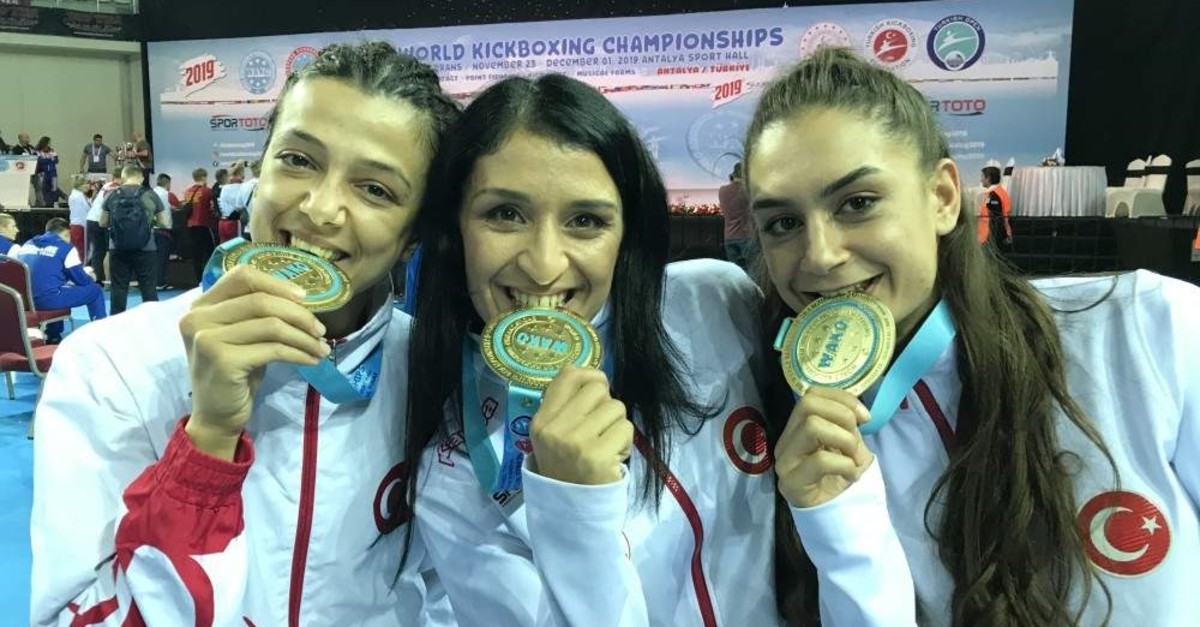 A nurse, a physical education teacher and a former factory worker from Istanbul crossed each other's path in the same kickboxing club. Now, they share a rare pride: winning three international kickboxing gold medals for their country.

Duygu Turan, Gülşah Kıyak and Emine Arslan, who trained together for World Kickboxing Championships in Antalya on Nov. 23-Dec. 1, are among the highlights of the tournament for Turkey, whose kickboxers won 17 medals in total. Turkey completed the tournament with five silver and nine bronze medals, competing against hundreds of kickboxers from 70 countries.

Thirty-year-old Arslan, who took up kickboxing seven years ago, credits the sports with kicking her bad habit of smoking. “I was smoking a pack a day,” she remembers. Arslan worked hard despite her difficult job as a textile worker. She barely had time for training but managed to win the second spot in a European championship two years ago.
Bağcılar Municipality offered her a less stressful job after her European title and she now works at a youth center run by the municipality. “I am more comfortable now and have more time for training. Women only need to be determined. There is nothing you cannot do. I want to set an example for other women,” Arslan told Anadolu Agency.

Kıyak, a national kickboxer, also enjoyed her first world title. “I couldn’t sleep that night,” she recounts her excitement on the day she won the gold, despite fighting with a broken finger in her first bout in the tournament.
“It is like a dream,” Kıyak, who also suffered a broken hand in last year’s competition.
Pursuing a kickboxing career since she was 10, Kıyak says she always had faith and trained hard for her single goal: becoming a world champion.
An avid Bruce Lee fan, Kıyak first took up kung fu before deciding to switch to kickboxing. “It is the result of the resolve we had as three women, three friends from the same club. Girls can do more if people support them,” she says.

Turan, a nurse at a hospital in Istanbul’s Şişli, is accustomed to world titles. A 2015 winner, Turan relived the pride. The 25-year-old did not have an easy start to her kickboxing career. “It was very difficult to convince my family. They did not want me to be a kickboxer at first,” she recounts. Still, she managed to persuade them to let her take up the sports at the age of 14.

“I believe women are more disciplined in sports. They are more ambitious and work harder [than men]. This is what brought us success. I hope all women can take up some kind of sports,” she says.