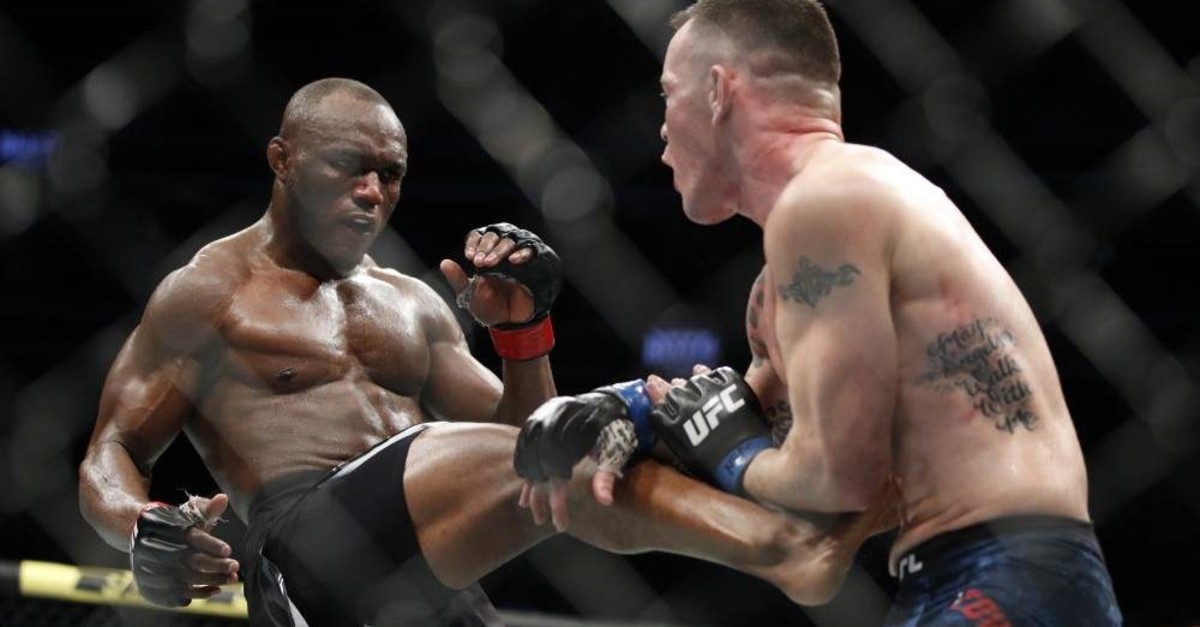 Usman lands a well-timed front kick against Covington in their mixed martial arts welterweight championship bout at UFC 245 in Las Vegas, Dec. 14, 2019. (AP Photo)
by Associated Press Dec 15, 2019 4:22 pm
Kamaru Usman sent a bloodied, bleary Colby Covington spiraling to the ground for the second time. Usman then leaped on him and went to work on Covington's badly injured jaw, battering his dazed opponent with hammer fists until the referee mercifully intervened.
Although he had to wait until the final minute, Usman settled his very personal feud with his sharply divisive challenger in perhaps the most satisfying way possible. "This one is not just for me," Usman said. “This is for the whole entire world right now.”
Usman brutally stopped Covington with 50 seconds left in their bout at UFC 245 on Saturday night, retaining his UFC welterweight belt with a spectacular finish to their grudge match.
Alexander Volkanovski also took the UFC featherweight title from Max Holloway and became the second Australian champion in the promotion's history with a tactical unanimous-decision victory, and Amanda Nunes defended her bantamweight title with a grinding unanimous-decision victory over Germaine De Randamie at T-Mobile Arena.
Usman (16-1) closed out an occasionally slow fight with Covington (15-2) in thrilling fashion, knocking down the challenger twice with right hands and then decisively finishing him on the ground. Covington's apparently broken jaw couldn't withstand the pressure of Usman, who drew strength from the personal animus he took into the cage.
“He talked a lot going into this, so this was a respect thing,” said Usman, who won his 11th straight fight. “I had a responsibility to go in there and teach him a lesson.”
The Nigeria-born, Texas-raised Usman made good on his vow to derail the career of Covington, whose grating personality and eager embrace of President Donald Trump have made him a polarizing, widely reviled figure in mixed martial arts.
Covington recently claimed he is only playing a character in the tradition of a classic wrestling heel. UFC President Dana White and a long list of his onetime teammates — including UFC stars Jon Jones, Jorge Masvidal and Tyron Woodley — all say Covington is just a difficult, unlikeable person.
Covington and Usman started with two busy rounds of striking in which Covington appeared to be landing more blows, but Covington poked Usman in the eye during the third. Usman responded by bloodying Covington in an impressive third-round flurry, and Covington subsequently told his corner that he thought his jaw was broken.
Usman took control from there, gradually finishing Covington in his first defense of the belt he took from Woodley earlier this year. Covington sprinted from the cage after the decision, declining to congratulate Usman."I made a lot of mistakes, but I know I hit harder than him," Usman said.
Last Update: Dec 20, 2019 2:23 am
RELATED TOPICS