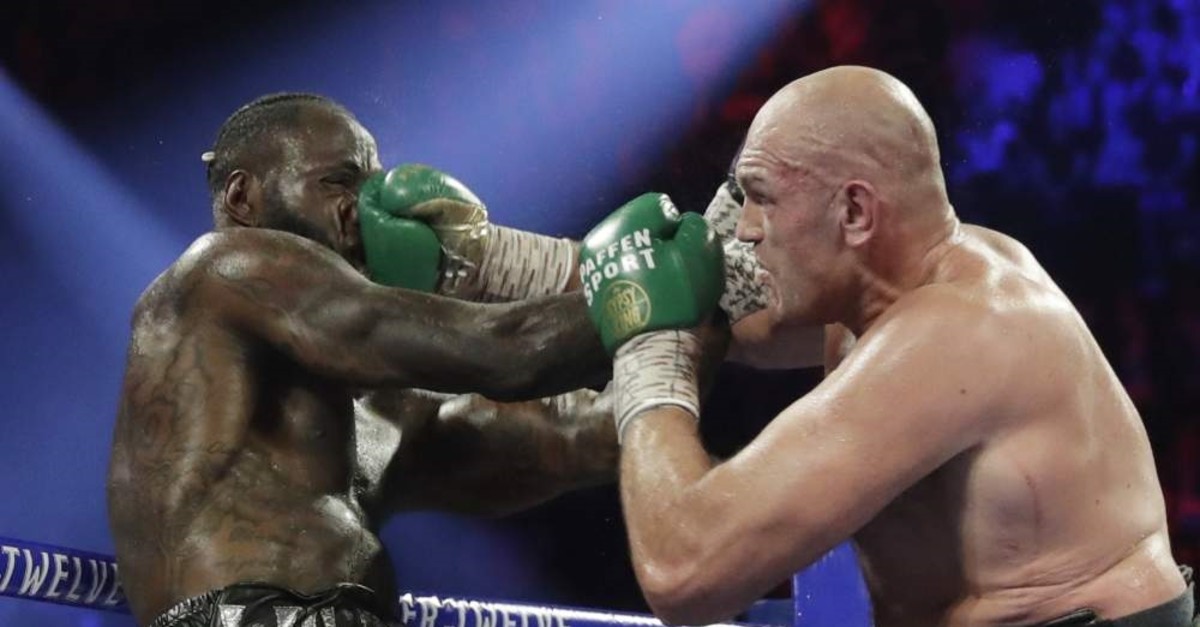 Britain's Tyson Fury delivered a dominant performance in his heavyweight championship bout with Deontay Wilder on Saturday, overwhelming his opponent to earn a seventh-round TKO victory in Las Vegas.

Fourteen months after their dramatic split-decision draw, Fury dominated the American champion – who had blood dripping from his left ear and leaking from his mouth when referee Kenny Bayless called a halt as Wilder's corner threw in the towel.

"The king has returned to the top of the throne," said Fury, who had dropped Wilder in the third and fifth rounds as he remained unbeaten while handing Wilder the first defeat of his career.

The self-styled "Gypsy King" from northern England – who was carried to the Las Vegas ring on a golden throne – had put on a boxing masterclass in their first fight on Dec. 1, 2018, but he was clearly ready to brawl from the opening bell on Saturday.

A massive right from Fury knocked down Wilder in the third leaving him on wobbly legs, and although he went down again moments later it was ruled a slip.

A huge left to the body had Wilder down again in the fifth, and Fury was raining blows on Wilder when Bayless called a halt at 1:39 of the seventh round after one of Wilder's corner team hurled a white towel into the ring to save him from further punishment.

A point deduction in the fifth round for holding was barely a blip for a dominant Fury. Two of the judges had the Briton winning every round, while the third judge gave one round to Wilder.

The 34-year-old American suffered his first defeat in 44 fights, falling to 42-1 with one drawn and 41 knockouts.

"Even the greatest have lost and come back," Wilder said. "I make no excuses. This is what big-time boxing is all about."

Fury regained a piece of the heavyweight title more than four years after beating Wladimir Klitschko for the WBA, IBF and WBO belts – and after depression, drink and drug problems had threatened to end his career.

"I just want to say a big shout out to Deontay Wilder," said Fury, who improved his own unbeaten record to 30-0 with one drawn and 21 knockouts. "He manned up. He really did show the heart of a champion.

"I hit him with a clean right hand and dropped him, and he got back up and battled on into round seven."

As the pro-Fury crowd of 15,816 at the MGM Grand cheered, Wilder briefly protested the stoppage.

"I just wish that my corner would have let me went out on my shield," he said. "I'm a warrior."

Wilder's fierce punching power had been on full display when he knocked Fury down twice in their first fight in Los Angeles – the Briton miraculously climbing off the canvas in the 12th round to hang on for a share of the spoils.

With new trainer Javan "Sugarhill" Steward in his corner, and more than 16 pounds heavier than the first encounter at 273 pounds, Fury was on the attack early, backing Wilder up with his jab and landing several hard shots in the opening round.

Fury failed to produce the second-round knockout he had predicted, but he was clearly in control.

The fight, arguably the biggest heavyweight collision since Lennox Lewis bludgeoned Mike Tyson into submission on the banks of the Mississippi River in 2002, drew a star-studded crowd.

Former heavyweight world champions Tyson, Lennox Lewis and Evander Holyfield were acknowledged in the ring before the bout – a nod to the fact that boxing's one-time glamour division was back in the spotlight.

Top Rank President Todd duBoef told ESPN that with gate receipts of $16.9 million Saturday's fight broke the record for a heavyweight fight in Las Vegas, passing the $16.8 million set by the title rematch between Lewis and Holyfield in 1999.

It's a far cry from the record $72.2 million in gate receipts generated by the Floyd Mayweather-Manny Pacquiao clash in 2015.

But Wilder-Fury III would be another big draw – and set the stage for a mega unification fight against Britain's Anthony Joshua, the WBA IBF and WBO champion, for the undisputed title.