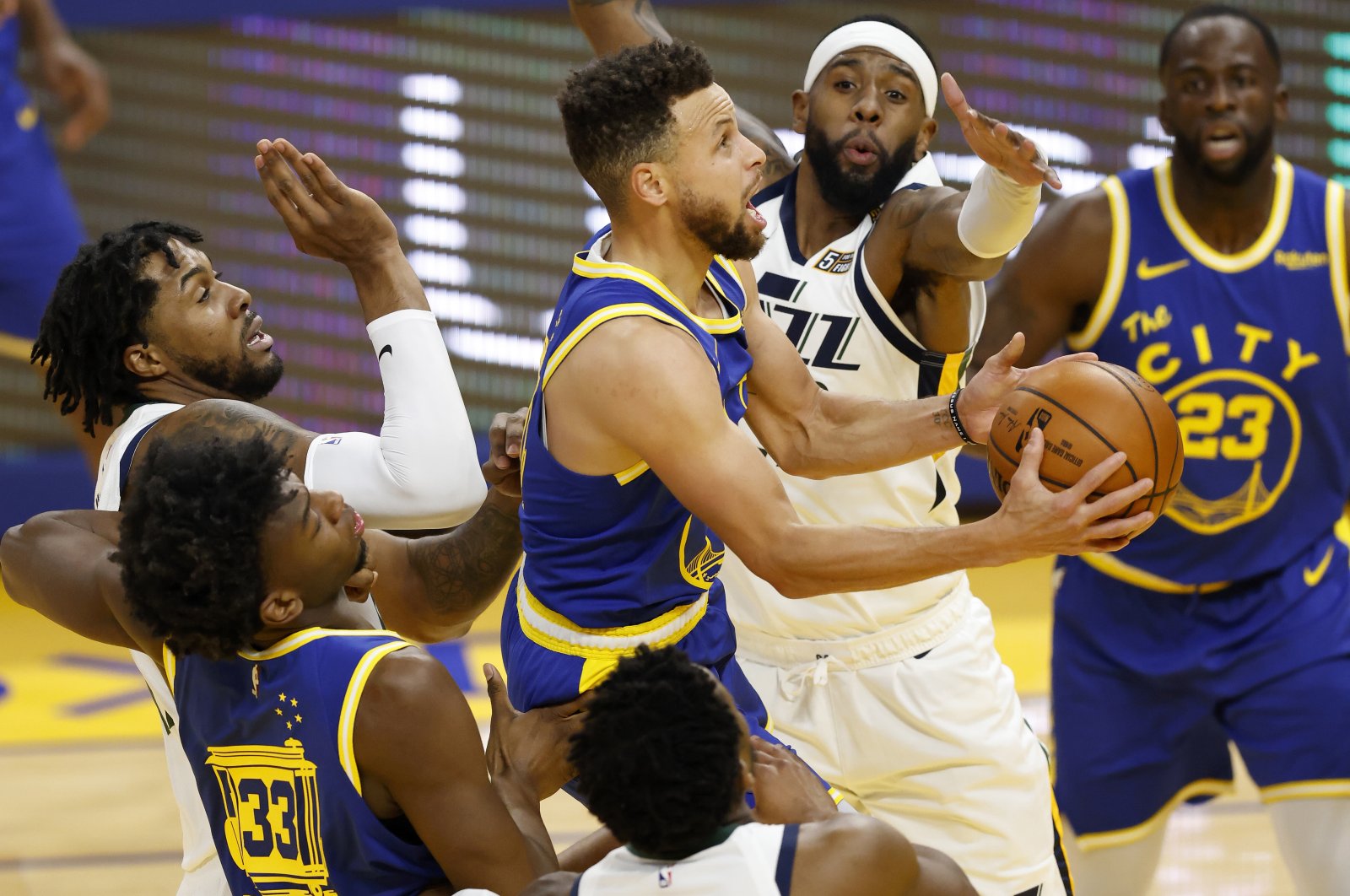 Golden State star Stephen Curry celebrated his 33rd birthday Sunday with a 32-point performance that propelled the Warriors to a 131-119 victory over the NBA-leading Utah Jazz and snapped a four-game skid.

Curry got off to a sizzling start, connecting on 63% of his shots in a 14-point first quarter in which the Warriors seized a lead they wouldn't relinquish.

"It's like that aging wine, right?" Curry said. "Keep it in the cellar and watch it get stronger and better, so I'm just enjoying the ride."

Andrew Wiggins added 28 points and Draymond Green put up a triple-double of 11 points, 12 rebounds and 12 assists for the Warriors, who bounced back from a 130-104 loss to the Los Angeles Clippers on Thursday in which Curry made just one 3-pointer.

The Warriors hadn't won since Feb. 26 – before the NBA's All-Star break.

They also reversed their fortunes against a Jazz team that had beaten them five straight times.

"Our whole team played amazing tonight," Curry said. "We took it personally to come out and play aggressive, focused defense. Everybody contributed."

Trailing by 10 going into the fourth quarter, Oklahoma City scored 38 points in the final frame, their 58% overall shooting helping them offset 24 turnovers.

A 3-pointer from Pokusevski gave the Thunder a 109-108 lead with 6 minutes 10 seconds remaining and they wouldn't trail again.

The 19-year-old made five from beyond the arc, the second-youngest player after LeBron James, when he was 18, to make five 3-pointers in a game.

"My teammates believe in me," Pokusevski said. "They kept talking to me, every time I missed a shot (they said) just keep playing and everything is going to be good.

Elsewhere, the Philadelphia 76ers had Aussie guard Ben Simmons back in action for the first time since a positive coronavirus test forced him out of the All-Star Game in a 134-99 beat-down of the San Antonio Spurs.

Despite the absence of Joel Embiid, who suffered a bone bruise in his knee in an awkward landing from a dunk on Friday, the Sixers dominated in their fifth straight win, improving their Eastern Conference-leading record to 27-12.

The Sixers were relieved the injury wasn't worse than first feared.

"He was happy that it isn't as bad as a lot of people thought it was, probably including himself," Philadelphia coach Doc Rivers said.

"Now that he knows all it takes is rehab, he has a game plan, we have a game plan and we're moving forward with it."

Up by eight at half-time, the 76ers effectively put the game out of reach with 46 points in the third quarter. They pushed their lead to as many as 42 in a fourth period as the starters for both teams were pulled.

Some 3,000 spectators, the first allowed in Philly's arena since the pandemic began, were on hand to enjoy the romp.

In Minneapolis, rookie Anthony Edwards scored a career-high 34 points to lift the Minnesota Timberwolves to a 114-112 victory over the Portland Trail Blazers.

Edwards drained a half-dozen 3s and Ricky Rubio finished with 15 points and seven assists for Minnesota, who ended a seven-game losing streak. Edwards' previous career high was 28 points against the Los Angeles Lakers in February.

Damian Lillard finished with 38 points for the Trail Blazers, who were seeking their first season sweep of Minnesota since the 2012-13 season. Portland lost for just the second time in their last six games.

In the late game, Zion Williamson scored a team-high 27 points as the New Orleans Pelicans rebounded from a one-sided loss on Friday to dominated the Los Angeles Clippers 135-115 in New Orleans.