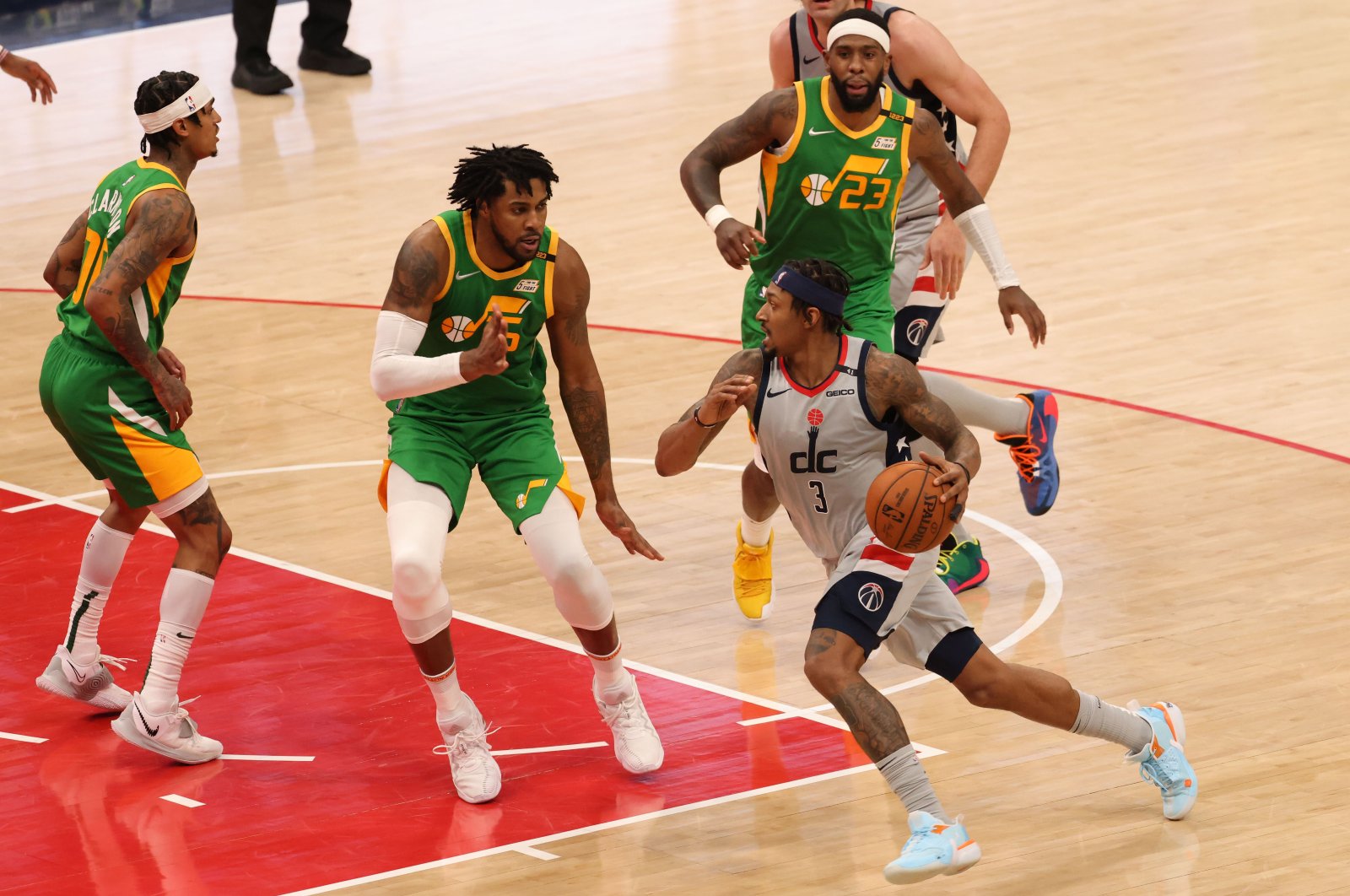 Bradley Beal scored 43 points and Russell Westbrook produced a 35-point triple-double as the Washington Wizards knocked off the NBA-leading Utah Jazz 131-122 on Thursday.

The Wizards snapped a five-game skid with a convincing performance against the Jazz, who endured their sixth defeat in 11 games and saw their lead atop the Western Conference dwindle to 1 1/2 games over the Los Angeles Lakers.

The reigning champion Lakers overtook the Phoenix Suns for second in the West with a 116-105 victory over the Charlotte Hornets while the Suns fell 123-119 to a Minnesota Timberwolves team led by a sparkling 42-point performance from rookie Anthony Edwards.

Edwards, the top overall pick in last year's NBA draft, has averaged 30.6 points over his last five games. On Thursday he connected on 15 of 31 shots from the field and made eight of 13 free throws.

Karl-Anthony Towns added 41 points for the last-placed Timberwolves, who rallied from a 15-point third-quarter deficit.

The Lakers notched their fourth straight victory on the back of James's 37 points, eight rebounds and six assists.

Dennis Schroder had 22 points and seven assists for the Lakers, who were again without injured star Anthony Davis.

James made eight of nine shots from the field in the first half for 22 points as the Lakers took a 15-point lead into the break.

Charlotte, led by 26 points from rookie LaMelo Ball, tied it up at 64-64 in the third quarter before the Lakers inexorably pulled away again.

James said the Lakers' surge since the All-Star break shouldn't be surprising, despite their sometimes struggles in the first half of the season.

"I know how well we can play," he said. "Obviously we took some bumps before the All-Star break, we had a lot of injuries, had some things to deal with because of Covid protocols, but I know what we're capable of."

Meanwhile, the Jazz, who won 11 straight in January and nine in a row in February, are trending in the opposite direction.

They fell into an early 24-point hole in Washington, and even a 42-point performance from Donovan Mitchell wasn't enough to help them dig out.

Aussie guard Joe Ingles added 34 points and Rudy Gobert added 10 points with 13 rebounds for Utah, but both said the Jazz can't afford to rest on their early-season exploits.

"We get upset when people laugh at us on TV and disrespect us," Gobert said. "It's on us to have respect for ourselves and understand that we're the challengers, we're not the champions, we're not a team that can just cruise and then turn it on when it's playoff time.

"We need to understand that we've got to stay hungry."

Beal said the Wizards, coming off a narrow loss to the Sacramento Kings on Wednesday, knew the Jazz would be a tough follow-up.

"We didn't have a choice but to guard or we were going to go down by 30," said Beal, who saw his streak of 11 straight 40-point games in which his team had lost finally come to an end.

"It was imperative that we left last night where it was and we came back with a different mindset that we were going to guard, and we did it for 48 minutes."

Westbrook came out with a sense of urgency, scoring 13 of his 35 points in the first quarter and finishing with 15 rebounds and 13 assists.

Julius Randle's third triple-double of the season fueled the New York Knicks in a 94-93 victory over the Orlando Magic at Madison Square Garden.

Randle scored 18 points with 10 rebounds and a career-high 17 assists.

His fadeaway jump shot with 2:38 remaining put New York up by five, but the Magic went on a 6-2 scoring run to set up a tense finish.

Orlando missed two chances to take the lead in the final 45 seconds and New York's Reggie Bullock – who had turned the ball over with 22 seconds left and the Knicks up by one – came up with a huge steal on Orlando's final possession.

In Atlanta, Trae Young and Bogdan Bogdanovic scored 23 points apiece to power the Hawks to a seventh straight victory, 116-93 over the Oklahoma City Thunder.

With the longest active winning streak in the league, the Hawks have moved ahead of the Hornets for fifth place in the Eastern Conference.