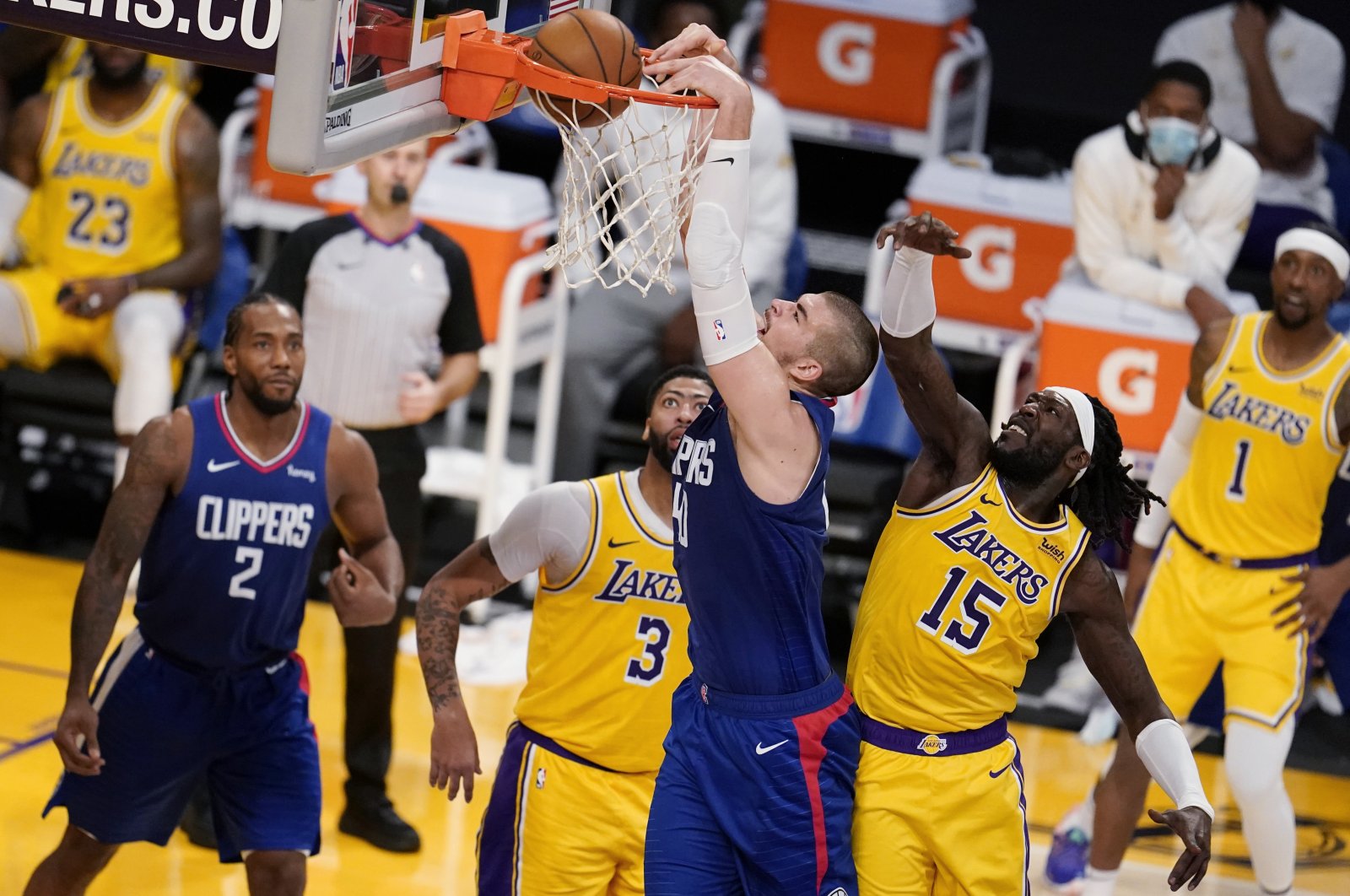 A little more than two months after the Lakers clinched the 2020 crown, the titleholders were handed a 116-109 defeat by the Clippers as the new NBA season kicked into gear after its shortest offseason

After the Los Angeles Lakers got their championship rings, the Los Angeles Clippers gave a performance that showed this retooled team is determined to contend for its own jewelry several months from now.

Paul George scored 26 of his 33 points in the second half, Kawhi Leonard added 26 points and the Los Angeles Clippers rallied past the Los Angeles Lakers on the NBA champions’ ring ceremony night for a 116-109 victory Tuesday.

George went 13 of 18 with five 3-pointers in an outstanding first game since agreeing to add four years and $190 million to his contract with the Clippers, who never trailed in the latest meeting of Southern California’s two NBA powerhouses. The Clippers beat the Lakers in the season opener for the second straight year while winning coach Tyronn Lue’s debut.

The Clippers stayed in their locker room while the Lakers received their rings, but they emerged with purpose and determined play – from their two superstars in particular.

“Our focus was on us,” Lue said. “The Lakers, they deserved that ring. They had a great year, and you can’t take nothing away from them. Our focus wasn’t really on the Lakers. They were the best team last year, so congratulations to them again, but now we’re moving on.”

LeBron James scored 22 points, and Anthony Davis had 18 for the Lakers just 72 days after they finished off the Miami Heat in the NBA bubble. James said he turned his ankle “pretty good” in the second half, leading him to play just 28 minutes.

“I’m happy today is over with and we can focus on the season, but it’s just a lot to process,” James said according to Associated Press (AP). “It felt weird having a basketball game today.”

The Lakers returned from the shortest offseason in league history and celebrated the franchise's 17th title, but they couldn't keep up with George and Leonard down the stretch. Lakers coach Frank Vogel also limited James' playing time and kept Davis to 31 minutes, anticipating the long grind ahead on his veterans after a 10-week offseason.

“It’s not ideal, but I do feel it’s necessary to manage those guys’ minutes the right way,” Vogel was quoted as saying by AP. “Getting through this stretch healthy is a priority, and evaluating how our new guys fit is a priority when we haven’t had a normal amount of time to do that. The five guys on the floor have got to be better than they were tonight.”

Serge Ibaka scored 15 points in his debut for the Clippers, who hadn't played since blowing a 3-1 playoff series lead to Denver and ruining a much-anticipated conference final showdown with the waiting Lakers in the bubble. The collapse led to coach Doc Rivers' departure and Lue moved down the bench to take over a star-studded team with several new additions.

The Lakers fell behind by 22 points under the ring hangover in the first quarter, but they erased all but two points of the deficit in the second. The Clippers pulled away late in the third with George scorching a series of one-on-one defenders. He scored 11 more points in the fourth to seal it.

Tuesday’s game was the start of a 72-game season – 10 fewer than usual for each team.

With COVID-19 still rampant in the United States, the NBA had yet to fill in the fixtures for the second half of the campaign, allowing flexibility in case of postponements and cancellations.

"When you're playing outside a bubble, it's almost impossible to avoid this virus," NBA commissioner Adam Silver was quoted as saying by Agence France-Presse (AFP) on Tuesday.

He hoped a vigorous testing program would allow the league to prevent major outbreaks.

The Warriors, who struggled last season and weren't among the teams to resume play in the NBA's quarantine bubble in Orlando, were playing their first game since March as they lost to the Brooklyn Nets in Tuesday night’s other game.

Kyrie Irving scored 26 points and Kevin Durant added 22 in three quarters as the Nets took control early and cruised to a 125-99 victory.

The duo was spectacular in their first regular-season game since joining the Nets as free agents in July 2019. Brooklyn led by as many as 38 points during Steve Nash's coaching debut.

Limited to 20 games last season due to shoulder injuries, Irving made 10 of 16 shots and hit four 3-pointers in his first game since Feb. 1. Irving added four assists and four rebounds while playing 25 minutes, 18 seconds.

In his first game since rupturing his right Achilles tendon in Game 5 of the 2019 NBA Finals with Golden State against Toronto, Durant made seven of 16 shots, hit all seven of his free-throws and contributed five rebounds to go along with three assists in 24 minutes, 56 seconds.