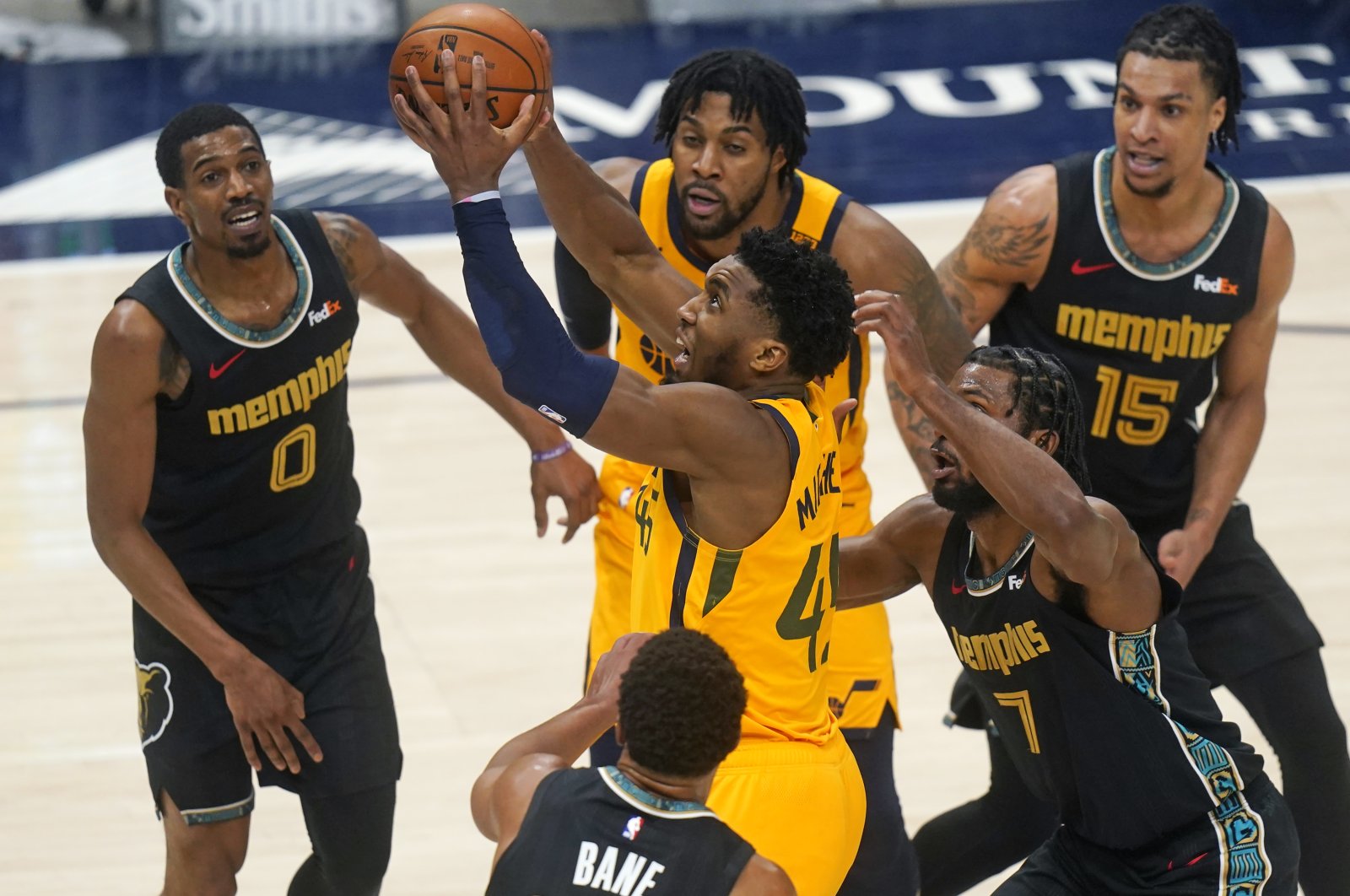 Utah's Donovan Mitchell scored 35 points and handed out seven assists as the Jazz boosted their NBA-leading record Saturday with a 126-110 victory over the Memphis Grizzlies.

With Mike Conley taking the night off to rest a hamstring injury, Mitchell took charge early. He made his first five shots on the way to scoring 28 first-half points – his most ever in a half.

He erased an early 8-2 deficit with a 3-pointer and a drive to the basket for a 3-point play, and his 3-pointer at the buzzer to end the half put the Jazz up 70-53.

Jordan Clarkson came off the bench to add 28 points and Rudy Gobert added 16 points and 14 rebounds for Utah, who pushed the lead to as many as 30 in the third quarter.

Joe Ingles added 15 points and seven assists and the Jazz notched their fifth straight victory and 33rd of the season.

The Los Angeles Clippers, chasing Utah and the Phoenix Suns in the West, won their fifth straight game, 122-112 over the Eastern Conference-leading Philadelphia 76ers.

Kawhi Leonard led the Clippers with 28 points, Paul George added 24 and Terrence Mann chipped in 23 off the bench.

"Just being aggressive," Mann said of the key to the Clippers' win over the Sixers, who were missing star big man Joel Embiid as he continues to recover from a bone bruise in his knee.

"Guys getting downhill, setting the tempo right off the jump. That's what we've been doing for the past five games."

In New Orleans, Zion Williamson scored 38 points and the Pelicans rallied to beat the Dallas Mavericks 112-103.

The Mavericks, missing ailing forward Luka Doncic and center Kristaps Porzingis who rested on the second night of a back-to-back, led 95-94 with less than four minutes remaining.

But the Pelicans roared home on an 18-8 scoring run that included 10 points from Williamson.

Two days after being traded by Orlando, center Nikola Vucevic made his Chicago debut in the Bulls' 120-104 loss to the San Antonio Spurs.

DeMar DeRozan added 17 points for the Spurs, who ended a four-game losing streak and made coach Gregg Popovich just the third NBA coach to reach 1,300 regular-season victories after Don Nelson (1,335) and Lenny Wilkens (1,332).

New York's Alec Burks and RJ Barrett scored 21 points to lead the Knicks to a 102-96 victory over the Milwaukee Bucks, who were without two-time NBA Most Valuable Player Giannis Antetokounmpo.

The Knicks, without Julius Randle because of a thigh injury, also lost center Mitchell Robinson to a broken right foot in the first quarter.

Robinson, who only recently returned from a broken hand, was hurt when he came down awkwardly while trying to defend Brook Lopez.

He stayed in the game for a few more minutes before limping off, the Knicks announcing the X-ray results shortly thereafter.

"Mitchell's been terrific for us," coach Tom Thibodeau said. "You hate to see it. You feel for Mitchell because all the work that he's put in."

Westbrook scored 19 points with 19 rebounds and 10 assists, his 15th triple-double of the season matching the franchise record established by Darrell Walker.

Beal finished with 17 points and six assists, before departing after a hard fall in the third quarter.

One day after blowing a 19-point third-quarter lead in a loss to Minnesota, the Houston Rockets bounced back with a resounding 129-107 victory over the Timberwolves.

Kevin Porter scored 25 points for the Rockets and Kelly Olynyk added 16 in his first game for Houston since arriving from Miami in the trade for Victor Oladipo.