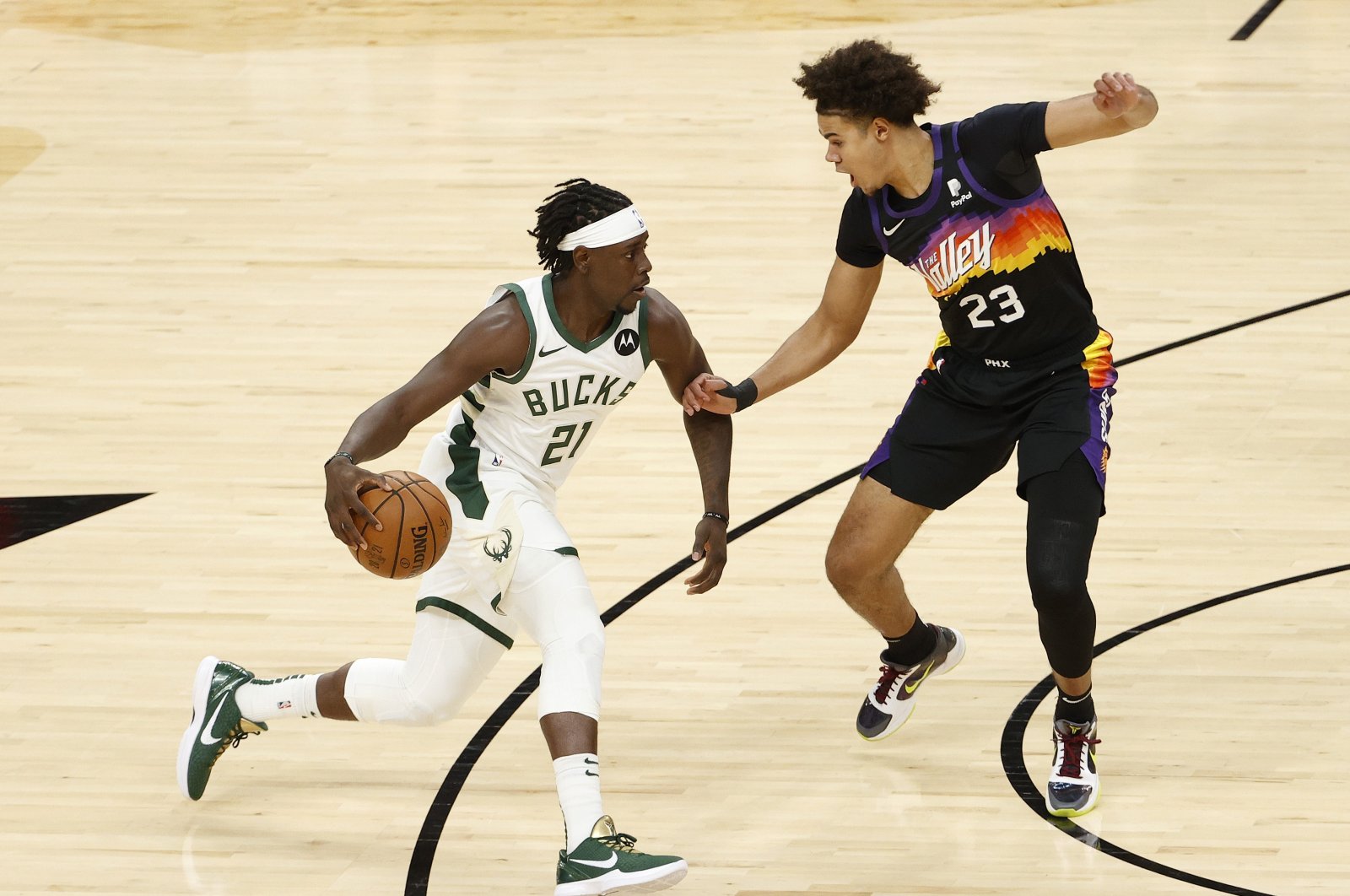 Milwaukee Bucks guard Jrue Holiday inspired his side with a spectacular steal and lift the visitors over hosts Phoenix Suns within one game of their first NBA title since 1971.

Holiday, an All-NBA Defensive First Team selection for the second time in four seasons, had game-highs of 13 assists and three steals and it was the last of each that delighted the Bucks and devastated the Suns.

"The great thing about Jrue is he can affect the game in so many ways," Bucks star Giannis Antetokounmpo said. "It says a lot."

Phoenix's Devin Booker was looking for a go-ahead basket but Holiday stripped the ball from him, then seconds later lofted a high pass to Greek forward Antekounmpo, whose slam dunk was a backbreaker.

"A great play by Jrue. I don't have any other words for that one," Suns coach Monty Williams said. "I just watched it and he just makes a great play."

It's the sort of thing Milwaukee's Pat Connaughton has seen from Holiday all year.

"He's physical, he's quick, he's strong. He's got a lot of things to him. And he's got quick hands," he said. "First Team All Defensive play. It was a defensive play of the year. It just kind of shows we're built on defense."

Holiday dropped off his man to double team Booker, who scored 40 points, when he went into the paint with the ball.

"I was just trying to score," Booker said. "He was behind me. I turned and he was right there."

"He turned right into me. I guess I was just in the right place at the right time," Holiday said.

"I thought he was going to shoot it and I was going to be behind him and try to contest or maybe bother him. Once he pump-faked, I felt like I should stay down and he literally turned into me."

Once Holiday dribbled away, there was Antetokounmpo waiting for a high pass rather than having Holiday run down the clock.

"Giannis took off and he was calling for the ball," Holiday said. "So at that point, I just threw it as high as I could and only where Giannis could go get it.

"He went up there got it. They don't call him the Freak for nothing. I threw it as high as I could."

Khris Middleton saw Holiday rip the ball from Booker's grasp and knew what was coming next.

"Once it's a loose ball, Jrue has got great instincts and great hands," Middleton said. "When he's aggressive, he's one of the tougher point guards to handle – his size, his athleticism, his skill set. He can do so many things on the court when he's aggressive."

And oh yes, he did sparkle with his shotmaking as well after a bad night.

"It's just confidence really, just go out there and shoot," he said. "Teammates keep telling me to shoot. That's what I did."

Bucks coach Mike Budenholzer was happy to see Antetokounmpo and Holiday use their instincts to deliver a knockout punch.

"It was a big play. The steal late, it was just an instinctive play. He's an incredible defender, strong hands and got in there and took it," said Budenholzer.

"Most times you just want to pull it out and run the clock. But Jrue and Giannis in a 2-on-1, just to put 2 points on the board, just trusting their instincts. They're playing, they're competing. That's what we need."