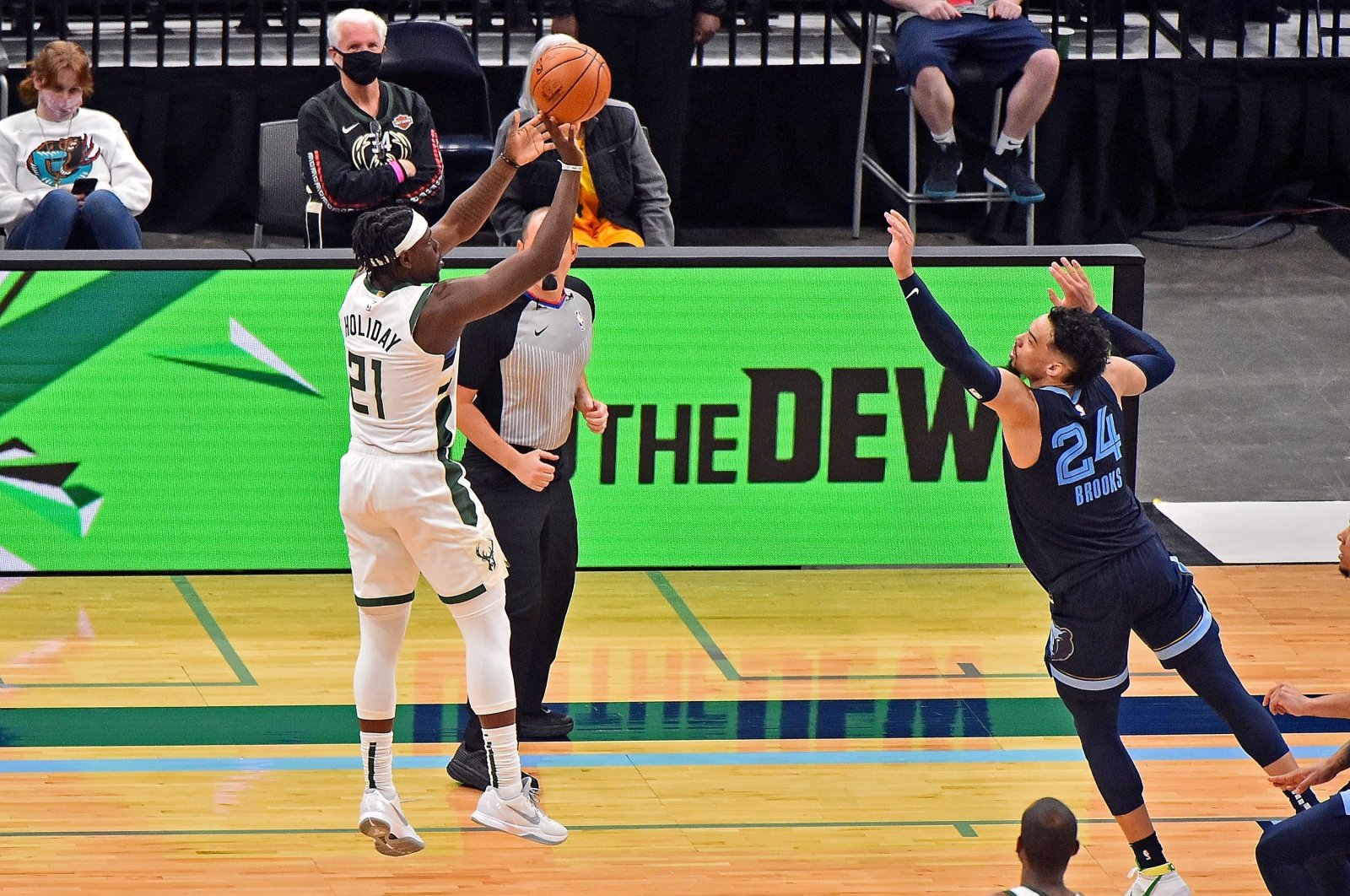 Milwaukee's Jrue Holiday drained a step-back jump shot with 2 seconds remaining as the Bucks edged the Memphis Grizzlies 112-111 Thursday for a boost heading into the NBA All-Star break.

Ja Morant had put the Grizzlies up with 7.5 to play, driving for a finger roll layup that put Memphis ahead 111-110.

Holiday responded, and the tense battle that saw five lead changes in the final minute ended as Grizzlies rookie Desmond Bane's 3-pointer bounced off the rim as time expired.

That was when Holiday let himself celebrate.

"You are excited and you're hyped and all that and you look at the clock and there's 2 seconds left and you're kind of like, dang, now we've got to get another stop now," Holiday said of keeping his emotions in check after his go-ahead basket.

"You definitely are excited and you have some emotion but me, I try to kind of keep that in and not get too excited because I know in two seconds anything can happen."

Antetokounmpo was in action even as several other top players slated to compete in Sunday's All-Star game in Atlanta took the night off, including Stephen Curry of the Golden State Warriors and Zion Williamson of the New Orleans Pelicans.

Khris Middleton added 22 points and 10 rebounds while Holiday and Pat Connaughton chipped in 15 points apiece, Connaughton draining a big 3-pointer that put the Bucks ahead by one with 39.1 seconds remaining.

"I think this is a great way to go into the break, to get a gutty win like this," Bucks coach Mike Budenholzer said. "Certainly a different feeling to find a way to win a tough one."

Morant led Memphis, scoring 28 of his 35 points in the second half as the Grizzlies shook off their early shooting woes to knot the score at 84-84 heading into the fourth quarter, in which Memphis led by as many as seven.

It was close in Washington, where the underdog Wizards edged the Los Angeles Clippers 119-117.

Los Angeles led 106-102 with 4:36 remaining. Three-pointers from Davis Bertans and Moritz Wagner gave the Wizards the lead and Beal drained a jump shot as the Wizards put together an 11-0 scoring run to take control.

Kawhi Leonard's 3-pointer pulled the Clippers within one point with 15.7 seconds to play, but two free throws from Beal and one from Rui Hachimura kept the Wizards in front and Westbrook came up with a key rebound to deny the Clippers a final chance.

Leonard finished with 22 points to lead the Clippers, who were without All-Star Paul George who was a last-minute scratch with dizziness.

Portland All-Star Damian Lillard scored 15 of his 44 points in the fourth quarter to lead the Trail Blazers to a narrow 123-119 home victory over the Sacramento Kings.

De'Aaron Fox led the Kings with 32 points – producing a pair of 3-pointers that pulled Sacramento within one point with 6.6 seconds left before Portland pulled away again.

Miami's Jimmy Butler returned from a two-game absence with right knee inflammation to lead the Heat in a 103-93 victory over the Pelicans.

Butler, who wasn't selected for the All-Star Game, scored 29 points with nine assists and three steals.

Despite the absence of Bam Adebayo, the Heat led by as many as 17 points in the first half.

But they sputtered offensively in the third and the Pelicans had cut Miami's lead to two with 6:26 remaining before Butler keyed a 16-8 Heat scoring run.

The surprising New York Knicks go into the All-Star break with a winning record, improving to 19-18 with a 114-104 victory over the Detroit Pistons.

But with a strong defensive performance and 27 points and 16 rebounds from All-Star forward Julius Randle, the Knicks led from wire to wire against a Pistons team that is bringing up the rear in the Eastern Conference.