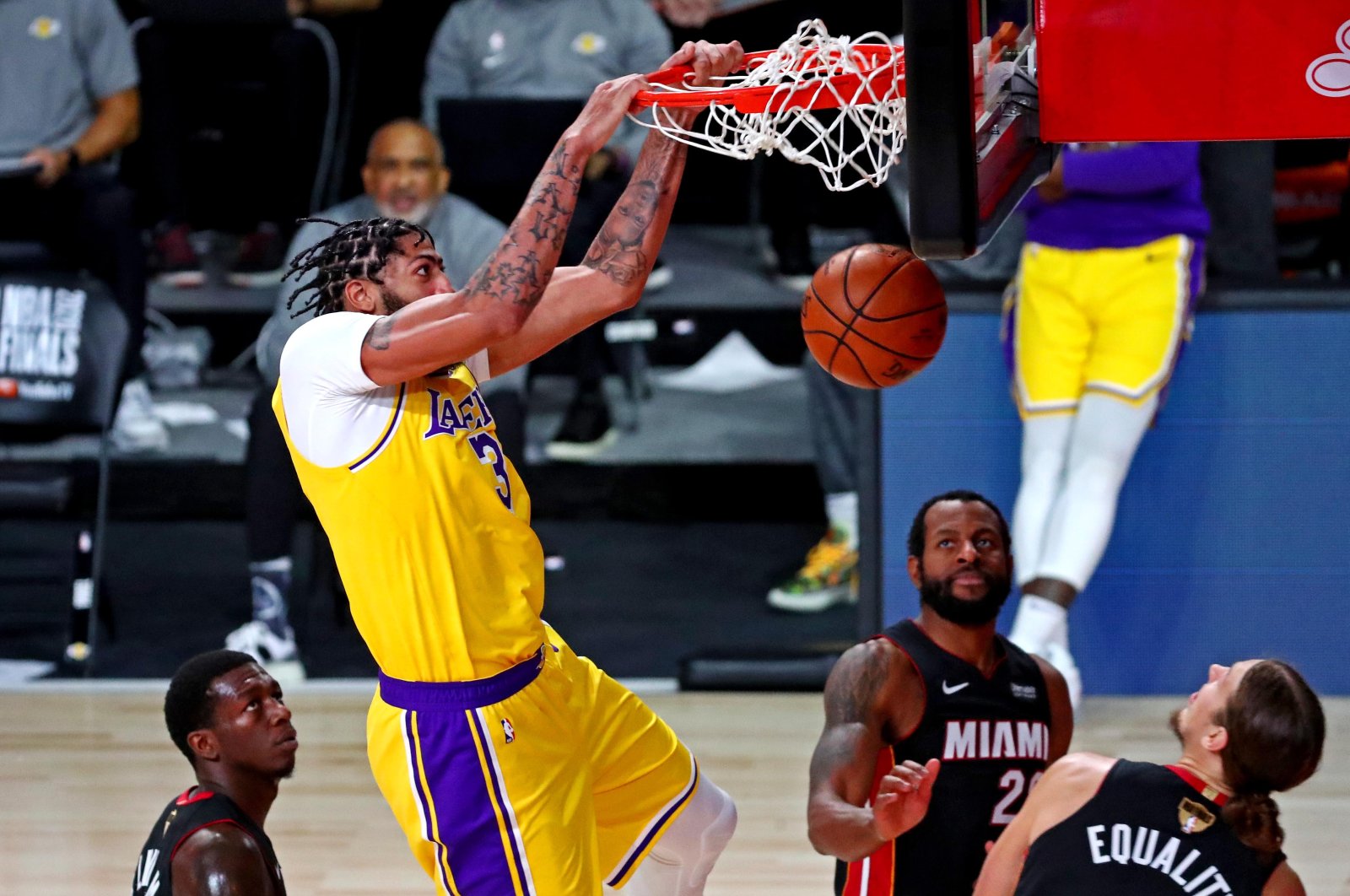 In the waning seconds of Miami's victory in Game 3 of the NBA Finals on Sunday, Heat star Jimmy Butler warned LeBron James that the Los Angeles Lakers were "in trouble," returning a jab James had sent his way at the beginning of the contest.

It looked as if Butler would be the one proven right at the start of Game 4 on Tuesday. James played sloppily, turning the ball over five times in the first half while being limited to eight points. Still, Los Angeles held a two-point lead.

Twenty-four minutes is plenty of time to turn trouble into triumph, as James has proven many times over during his illustrious career. The superstar finished with game-highs of 28 points and 12 rebounds and the Lakers were just one win away from their 17th championship with a 102-96 victory at the NBA bubble near Orlando.

Anthony Davis added 22 points, Kentavious Caldwell-Pope scored 15 and Danny Green 10 for the Lakers, who will look to close out the series Friday. A victory would tie Los Angeles with the Boston Celtics for most championships in NBA history.

James' early struggles Tuesday mirrored his performance in Game 3, when he was responsible for eight of the Lakers' 19 turnovers. He buttoned things up in the second half, losing the ball just once while his team kept Miami at bay.

"A perfect game is not going to happen, but that doesn't mean you still don't strive to be as great as you can be every night," James said. "Tonight was one of those games where we had to win on the defensive end and make some timely shots."

The timely shots in this one belonged to Caldwell-Pope, who buried a 3-pointer with 2:58 remaining to put Los Angeles up 93-88. After Adebayo couldn't beat the shot clock on a jumper, Caldwell-Pope finished a layup on the other end for a seven-point lead.

"KCP down the stretch, big guts to take and make those shots that he took," Lakers coach Frank Vogel said.

Jae Crowder nailed a trey to cut the Heat's deficit to four with 1:37 left, but Rajon Rondo scored his first bucket of the game, and Davis followed from the 3-point range to seal the game for Los Angeles.

"We know we've got to be better. We know that we can be better," said Butler, who was unable to repeat his 40-point heroics from Game 3. "We've got to play damn near perfect to beat them – we didn't do that tonight."

Down by five to begin the fourth quarter, Miami knotted the score at 83 on a Butler layup with 6:27 left.

The Lakers scuffled to begin the third before James nailed a deep 3-pointer for a 55-54 edge. That kicked off an 11-3 stretch during which James either scored or assisted on each of his team's buckets.

The Los Angeles lead reached 71-64 on back-to-back threes from Kyle Kuzma and Davis. The Lakers ended the quarter up 75-70.

Trailing 27-22 after one, the Heat began the second quarter on a 12-2 run to grab a five-point lead of their own.

Los Angeles equalized at 39 on a Markieff Morris trey and pulled away to 49-45 on an Alex Caruso 3-pointer with 27.6 seconds remaining. A Herro jumper just before the buzzer cut Miami's deficit at the break to two.

Despite the loss, the Heat benefitted from the return of Adebayo, who played 33 minutes.

"I thought he was great, considering he hasn't played in a week," Miami coach Erik Spoelstra said. "He's the heart and soul of who we are, so it was just great to have him back out there."