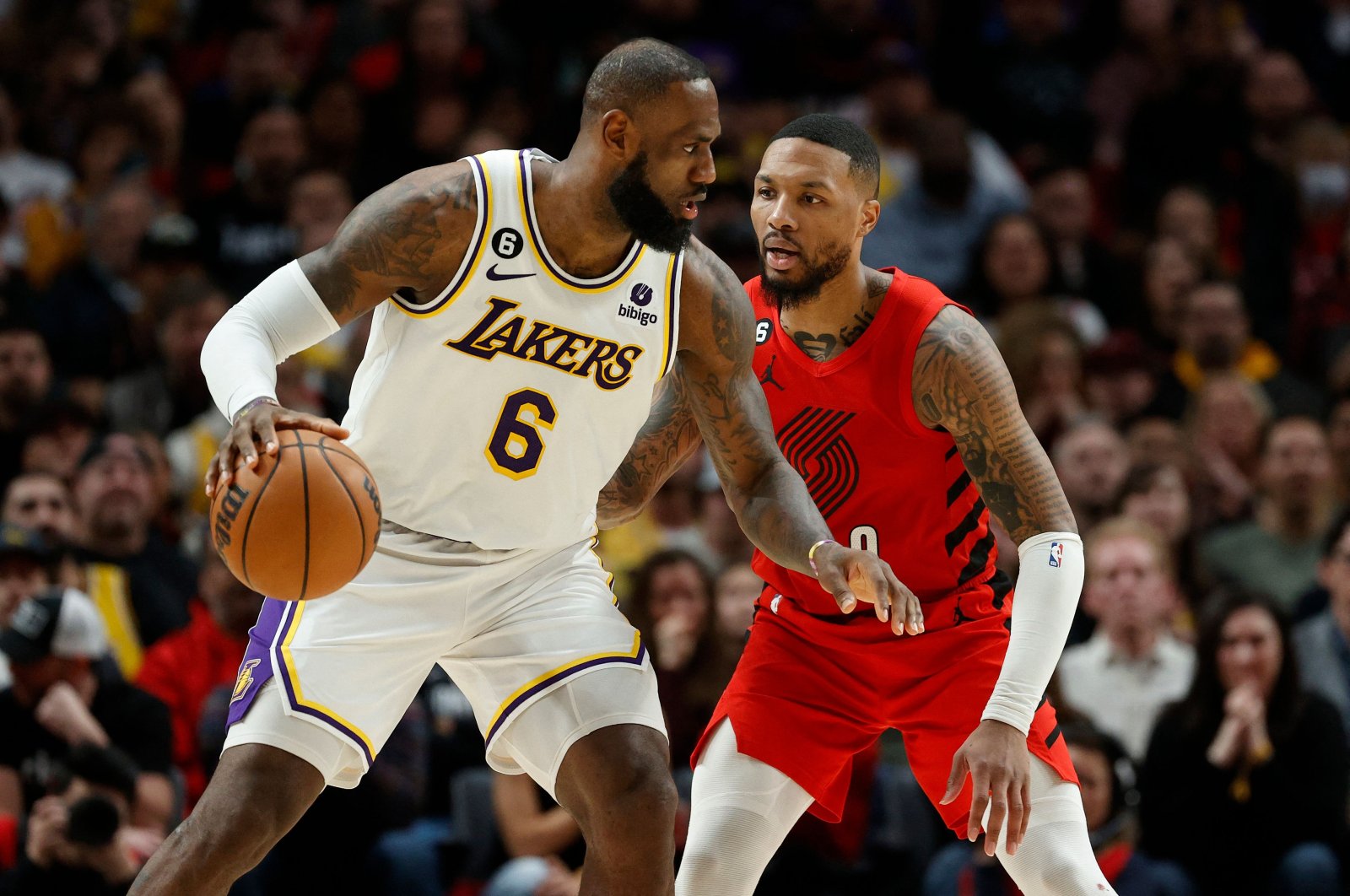 LeBron James put on an awe-inspiring performance on Sunday, erupting for 20 of his 37 points in the second half as the Los Angeles Lakers pulled off an incredible feat, rallying from a 25-point halftime deficit to shock the Portland Trail Blazers 121-112.

The Lakers, who scored just 13 points to Portland's 45 in the second quarter, roared back to become the first team to win a game in which it lost a quarter by 30 or more points since the Boston Celtics against the Buffalo Braves in 1972.

The remarkable reversal was just one dramatic comeback on a night that saw the Brooklyn Nets – led by 38 points from an inspired Kyrie Irving – beat the NBA champion Golden State Warriors 120-116 in San Francisco.

However, the two top teams in the Western Conference – the Denver Nuggets and Memphis Grizzlies – couldn't climb all the way back from early deficits, Denver falling 101-99 to the Oklahoma City Thunder and Memphis losing 112-110 to the Phoenix Suns.

In Portland, a Lakers team struggling for consistency in the absence of injured Anthony Davis started promisingly, making their first six shots on the way to an early 14-point lead.

But the second quarter saw them "falling apart on both sides of the ball," coach Darvin Ham said, and they were on the ropes after the period in which their six made shots were one fewer than their seven turnovers.

But James scored 16 points in the third quarter and Dennis Schroder added 14 as the Lakers cut the deficit to five heading into the final frame.

"Thank god for the standing eight count," James said. "We were able to stay in the bout."

Schroder finished with 21 points in total and Thomas Bryant added 31 points and 14 rebounds for the Lakers, who regained the lead on Bryant's three-pointer midway through the fourth and took the lead for good on Bryant's floater – off a feed from James – with 5:08 to play.

"We just challenged the team," Ham said of the locker room conversation at halftime. "There are 24 minutes left. Twenty-five points is a huge deficit but in the NBA ... playing the right way you can cut into it pretty quickly and give yourself a chance."

In San Francisco, Irving drove the Nets' comeback, but with the Warriors defense locked on him, it was Royce O'Neale who hit a go-ahead three-pointer with 28.5 seconds remaining.

Irving drained a pair of free throws to seal the win.

"Total team effort," Irving said after the Nets out-scored the Warriors 27-10 over the last seven minutes.

With two-time reigning MVP Nikola Jokic still sidelined by a hamstring injury, the Nuggets trailed much of the night.

They tied it at 99-99 with 30.2 seconds remaining, but Gilgeous-Alexander banked in a go-ahead basket with 9.2 seconds left and Denver's Jamal Murray, facing stifling defense from Lu Dort, missed as the clock ticked down.

Murray finished with 26 points to lead seven Nuggets players in double figures, but Denver lost for just the fourth time at home this season.

In Phoenix, the Suns dominated much of the game, leading by 29 points in the third quarter only for Memphis to cut the lead to two with less than 30 seconds left.

The Suns held on, Mikal Bridges scoring 24 points and Chris Paul adding 22 with 11 assists in his return from a hip injury.

Ja Morant scored 27 points with eight assists and Desmond Bane added 24 points for the Grizzlies, who have lost two in a row on the heels of an 11-game winning streak.

The Los Angeles Clippers – led by Kawhi Leonard's 30 points and nine rebounds – used a late surge to topple Luka Doncic and the Mavericks in Dallas 112-98.

Slovenian star Doncic had 29 points and 10 rebounds, connecting on just nine of his 21 shots from the field and missing five of his 13 free throws as he was held below 30 points for just the third time in 14 games.

The Mavs, who missed the contribution of injured center Christian Wood, have lost six of their last eight games.