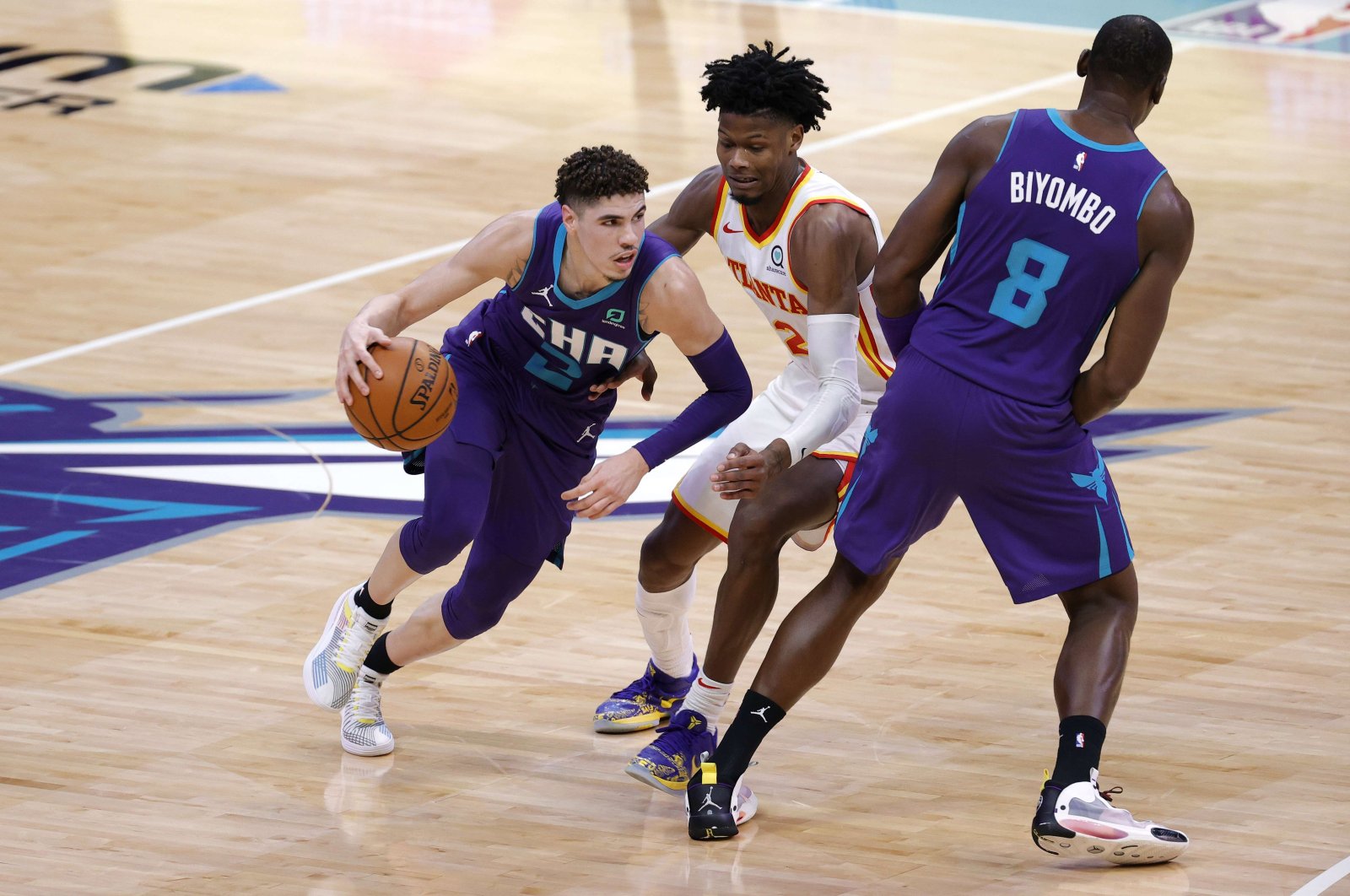 Charlotte Hornets' LaMelo Ball drives to the basket against Atlanta Hawks' Cam Reddish during an NBA game at the Spectrum Center in Charlotte, North Carolina, U.S., Jan. 9, 2021. (AFP Photo)
by Reuters Jan 10, 2021 11:32 am

Rookie LaMelo Ball had a triple-double and Terry Rozier scored 23 points as the Charlotte Hornets stretched their winning streak to three games by defeating the Atlanta Hawks 113-105 on Saturday night in Charlotte, N.C.

Ball, a first-round draft pick in November, secured his first career triple-double with 22 points, 12 rebounds and 11 assists. The 19-year-old guard played 31 minutes off the bench, and he was charged with only one turnover. He's the youngest player in NBA history with a triple-double.

It's back-to-back losses to Charlotte for the Hawks, who lost Wednesday night's matchup at home. The Hornets had a game in between, winning Friday night at New Orleans.

Ball was an assist shy of a triple-double in the New Orleans game.

On Saturday, Ball was the only Charlotte player with more than seven rebounds.

Young was 0-for-5 on 3s, pushing his mark to 0-for-8 from long range in two meetings with Charlotte this week. Young went 5-for-19 overall Saturday night.

Caleb Martin had 15 points for Charlotte and Gordon Hayward, who had a career-high 44 on Wednesday, added 13 points.

The Hornets led 59-50 at halftime, outscoring Atlanta 17-6 across the final five minutes of the second quarter. Ball had eight of Charlotte's points during that span.

Atlanta took more than half of its 91 shots from the field from 3-point range, going 14-for-46 from deep.

Despite the 109 total first-half points, the only players in double figures were Washington with 12 points and Collins with 10 points.

An 11-point lead from the first half had dipped to a five-point spread late in the third quarter before the Hornets surged again. They went up 98-83.

Hunter had nine consecutive of Atlanta's points during a fourth-quarter span in attempt to keep the Hawks within range.

Antetokounmpo, the two-time reigning NBA Most Valuable Player, was a pre-game scratch due to back spasms, one night after taking a hard fall in the Bucks' loss to the Utah Jazz.

Milwaukee came out strong Saturday despite its star's absence, holding a Cleveland side dealing with its own injury issues to just 14 points in the first quarter.

The Cavaliers – playing the sixth and final game of a season-long road trip – trailed by as many as 19 points in the second quarter, playing without leading scorers Collin Sexton and Darius Garland. Garland missed his fourth game with a shoulder injury, while Sexton sat out his second in a row with an ankle injury sustained Jan. 6 at Orlando.

Drummond's work on the interior buoyed Cleveland as it rallied from two steep deficits, trimming the 19-point first-half deficit to as few as two before intermission, and cutting a 17-point third-quarter gap to eight in the fourth quarter. The Cavaliers never came any closer down the stretch.

A Milwaukee defense that gave up 25 3-pointers in Friday's loss held Cleveland to just 7 of 26 on Saturday. Larry Nance Jr., who finished with 17 points, led the Cavaliers by going 3-of-6 from behind the arc.

Milwaukee made just 33.3 percent from long range, almost nine percent lower than its average coming into Saturday's game, but the Bucks knocked down five more than the visitors. Middleton and Donte DiVincenzo each made three from long range.

Drummond, Nance and Damyean Dotson (a season-high 21 points) were the only Cavaliers to score in double-figures. Saturday marked the seventh consecutive game in which Cleveland failed to reach 100 points.