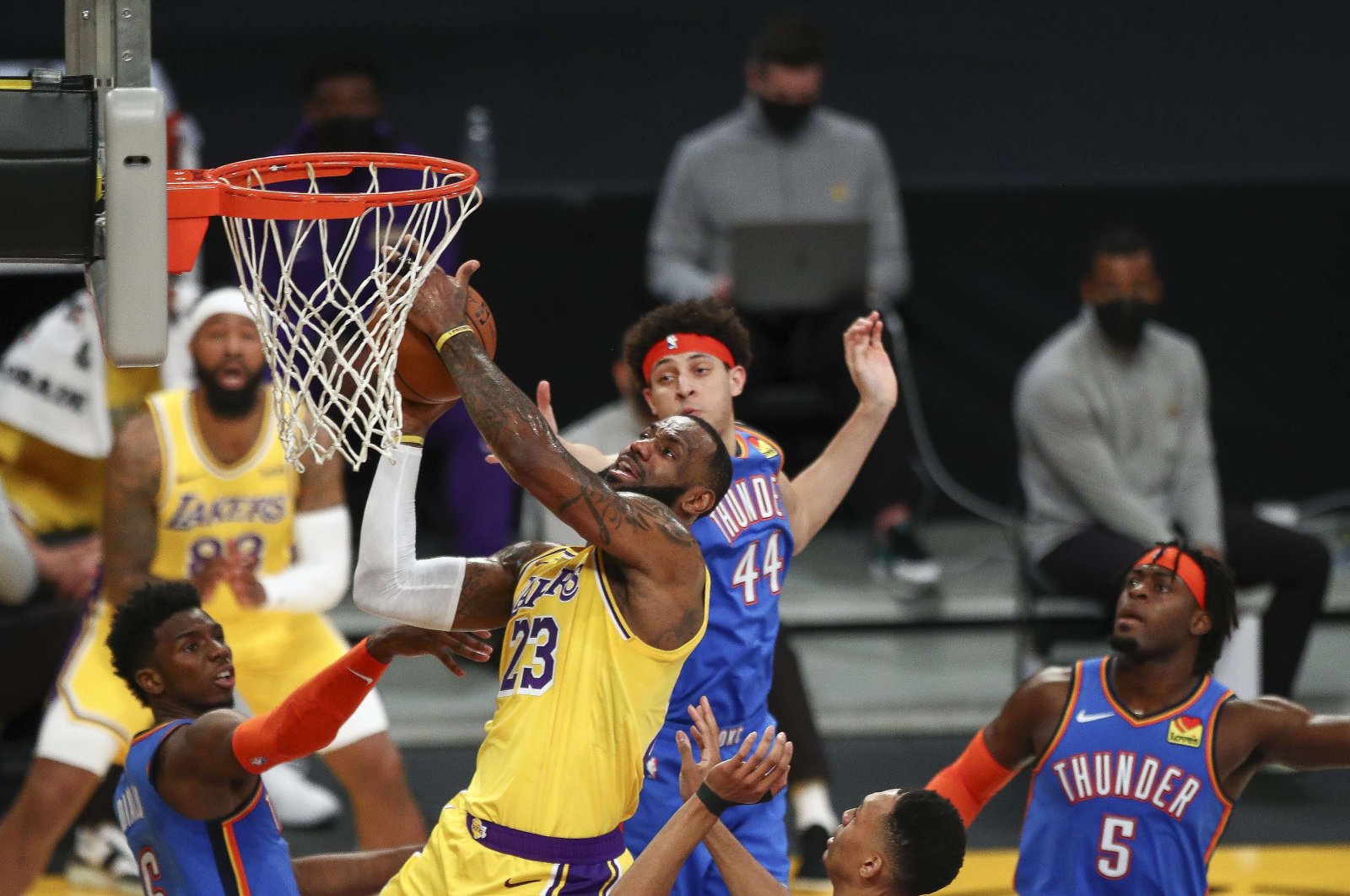 Shai Gilgeous-Alexander had 29 points, 10 assists and seven rebounds, and Darius Bazley collected 21 points and 16 rebounds for the Thunder. Hamidou Diallo scored 20 points with 11 rebounds, while Justin Jackson and Al Horford each had 14.

Antetokounmpo on a roll for Milwaukee Bucks

Bryn Forbes had 15 points, while Brook Lopez and Donte DiVincenzo scored 13 each for the Bucks, who have won five straight.

Nikola Jokic followed up a 50-point performance Saturday with 35 points and 12 rebounds, and Will Barton scored 20 of his 24 points in the first half for the Nuggets, who have dropped three straight.

Rookie LaMelo Ball drilled a season-high seven 3-pointers as host Charlotte blitzed Houston from behind the arc to win its second straight.

Pascal Siakam scored 12 of his 32 points in the fourth quarter as Toronto won at Memphis.

Toronto coach Nick Nurse was ejected when he picked up his second technical foul with 3:02 left in the third quarter. The Raptors, who were down by 10 points after the technical free throw, responded with a 28-5 surge to take the lead, and they went on to win for the fourth time in five games.

Fred VanVleet also scored 32 points and added nine assists for the Raptors, and Norman Powell had 29 points. Former Raptor Jonas Valanciunas, who had 18 points and 14 rebounds in the first half, finished with season bests of 27 and 20, respectively. Dillon Brooks scored 22 points for the Grizzlies, who have lost four straight.

Dejounte Murray scored 27 points, grabbed 10 rebounds and snagged a career-best eight steals to lift host San Antonio to a win over Golden State in the first game of a back-to-back between the teams.

Murray's eight steals were the most in the NBA this season. Three Spurs players posted double-doubles, with DeMar DeRozan adding 21 points and 10 assists and Jakob Poeltl scoring 14 points and grabbing 11 rebounds.

Luka Doncic added 26 points, eight rebounds and five assists, and Tim Hardaway Jr. came off the bench for 24 points for the Mavericks, who won consecutive games for the first time since Jan. 20-22. Doncic scored 25 or more points for the 11th consecutive game, two shy of the franchise record held by Mark Aguirre and Dirk Nowitzki.

Malik Beasley had 30 points and nine rebounds and Anthony Edwards scored 22 points for the Timberwolves, who lost for the fourth time in their past five games. Jaylen Nowell added a career-high 18 points.

In a matchup of two of the NBA's best scorers, Bradley Beal scored 35 points to lead Washington to a road victory over Zach LaVine and Chicago.

LaVine also scored 35 points. With the Bulls trailing 103-101 with 9.8 seconds left, he spun around Beal at the top of the key and drove to the basket, but he missed a contested layup.

Rui Hachimura finished with 19 points and 10 rebounds for Washington. Thaddeus Young added 14 points for the Bulls.

Devin Booker scored 36 points and Phoenix had just enough without Chris Paul to finish off a victory against visiting Cleveland.

Mikal Bridges had 22 points while Deandre Ayton added 15 points and 16 rebounds as the Suns won their third consecutive game and sixth in the past seven. Paul did not play on the back end of games on consecutive days due to a sore hamstring. The injury is not believed to be serious.

Collin Sexton scored 23 points and Darius Garland added 17 as the Cavaliers dropped their fourth consecutive game and sixth in the past seven. They were starting a five-game road trip.