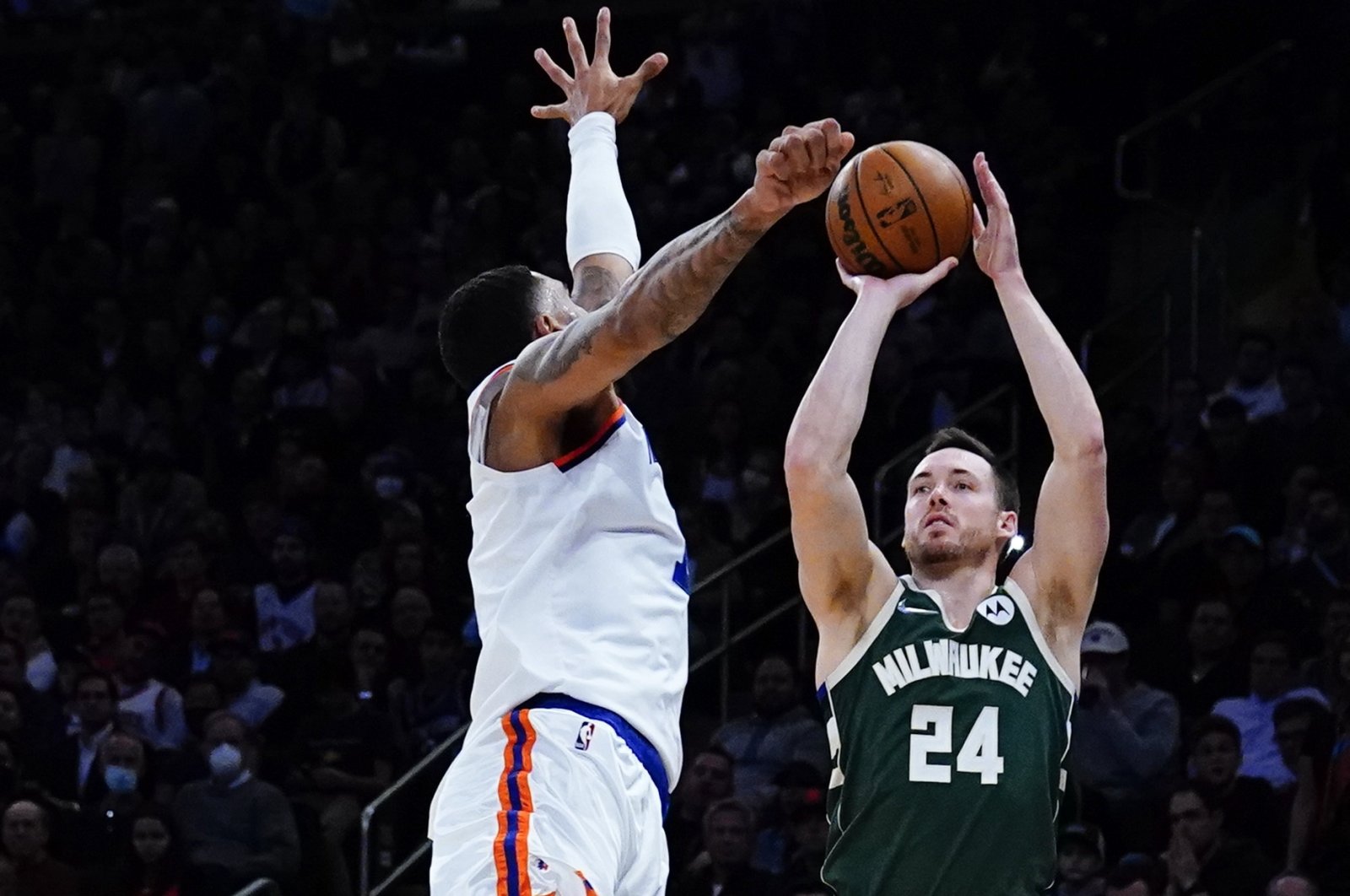 The Milwaukee Bucks sent the New York crowd through a range of emotions Wednesday – taking a 24-point lead, squandering it, before emerging with a 112-100 victory against the Knicks at Madison Square Garden.

The Knicks had rallied from a 21-point first-half deficit to stun the reigning champion Bucks in Milwaukee earlier Friday, but they couldn't work the same magic on their home floor.

Pat Connaughton's season-high 23 points for Milwaukee included three 3-pointers in the final four minutes – part of a long-range barrage the Bucks used to hold on.

Grayson Allen added two 3-pointers in the waning minutes for Milwaukee, who finished with 26 3-pointers on 50 attempts.

The Bucks appeared to have the game in hand when Giannis Antetokounmpo came up with a steal and a dunk for a 24-point lead midway through the third quarter.

But New York's reserves – who took over in the third quarter as Knicks coach Tom Thibodeau benched his ineffective starters – responded.

Derrick Rose scored 22 points off the bench for New York, and Immanuel Quickley added 18. Quickley's 3-pointer tied the score at 89-89 with 5:06 left to play.

The Bucks quickly edged back in front with 3-pointers from George Hill and Jrue Holiday, and Connaughton's long-range efforts pushed the lead back to 10 points with 2:05 to go.

"We definitely had that in the back of our mind," Antetokounmpo said of the Bucks' loss to New York last week.

"Coming here tonight on a back-to-back, obviously our bodies are tired, but at the end of the day, we've got to do what we've got to do. "We kept our composure and that's who we are."

The Warriors improved their league-leading record to 10-1 as Wiggins took it to his former team, making all nine of his shots in the first half.

That included a soaring dunk over Karl-Anthony Towns in the second quarter.

Russell Westbrook posted a triple-double of 25 points, 12 rebounds and 14 assists to fuel the injury-depleted Lakers to a 120-117 overtime win over the Miami Heat in Los Angeles.

Anthony Davis added 24 points and 13 rebounds as the Lakers improved to 2-2 with superstar LeBron James sidelined by an abdominal strain.

A litany of injuries left the Lakers with just nine players in uniform.

But Malik Monk starred with 27 points off the bench – including 16 in the second half and five in overtime.

"Resilience," Davis said of the key for the Lakers, who twice trailed by nine points in the fourth quarter.

Bam Adebayo scored 28 points for the Heat before fouling out. Tyler Herro scored 27 for Miami, who missed six of their first seven shots in overtime to fall into a five-point hole.

Brooklyn's Kevin Durant poured in 30 points, LaMarcus Aldridge added 21 and James Harden produced a triple-double of 17 points, 11 rebounds and 11 assists as the Brooklyn Nets bounced back from a blowout loss to the Bulls with a 123-90 victory over the Magic in Orlando.

Two days after a fourth-quarter collapse in Chicago saw their five-game win streak end, the Nets put together a 17-1 scoring run bridging the third and fourth quarters to seize a late 102-75 lead.

With the Magic unable to score for a span of more than five minutes, Brooklyn pushed their lead to more than 30 points.

The Nets reserves contributed 59 points, including Aldridge's 21 off the bench, 11 from DeAndre Bembry and 10 from Jevon Carter.

"Trying to recover after the last game – we had the lead late and we just didn't finish that one well," Aldridge said. "Tonight, I thought guys stayed more focused."