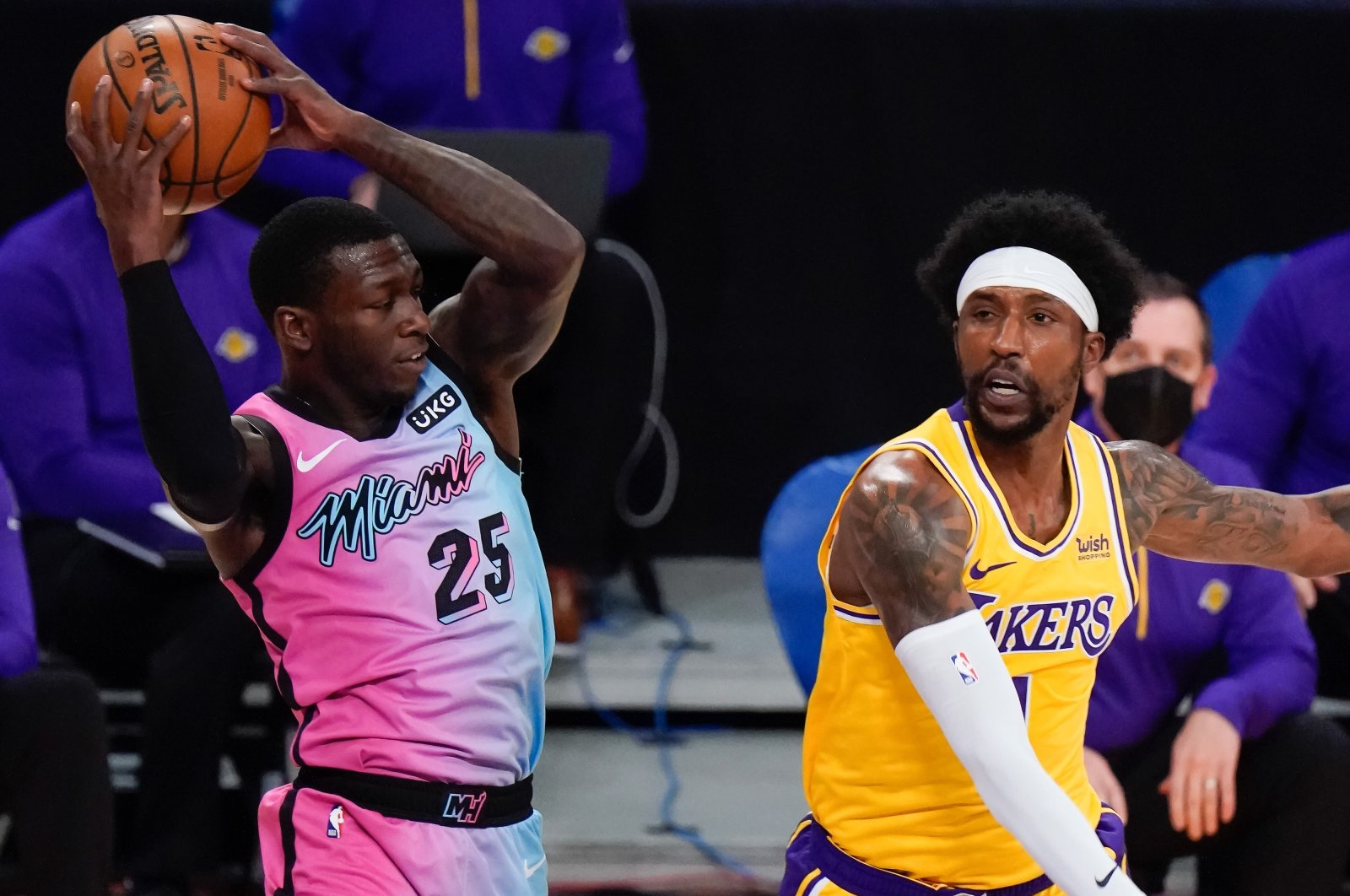 Kendrick Nunn scored 27 points and Jimmy Butler had 24 points and eight rebounds, leading the Miami Heat to a 96-94 victory over the host Los Angeles Lakers on Saturday in a rematch of last season's NBA Finals.

Bam Adebayo had 16 points and 10 rebounds and Duncan Robinson chipped in 11 points with 10 rebounds for the Heat, who have won six of nine.

Kyle Kuzma had 23 points and LeBron James (seven-for-21 from the field) added 19 points, nine rebounds and nine assists for the Lakers, who have dropped three of their last four contests.

Lakers guard Dennis Schroder missed his second straight game due to the NBA's health and safety protocols, while All-Star forward Anthony Davis sat out his fourth consecutive game while he remains out with a right Achilles tendon injury.

Curry was escorted back to the locker room shortly before the opening tip. The Warriors reported a few minutes later that the league's third-leading scorer wasn't feeling well.

Despite Curry's last-minute scratch, the Warriors led 100-98 and had possession of the ball after Draymond Green grabbed an offensive rebound with 15.7 seconds left. But Green got two technical fouls and was ejected from the game, leading to Rozier's tying free throws and subsequent game-winner.

Damian Lillard scored 29 of his 35 points in the second half and had 12 assists for Portland, which saw its season-high six-game winning streak halted.

Phoenix Suns' Devin Booker scored a game-high 23 points, Mikal Bridges was one of three Phoenix players to finish with 19 points and the visitors routed shorthanded Memphis 128 - 97.

Despite not scoring for the game's first 3:43, Phoenix surged ahead by 13 points at the end of the first quarter. Memphis put up little resistance from then on.

The Suns ran out to a 31-point halftime lead, holding the Grizzlies to fewer than 20 points in each of the first two quarters. Phoenix's lead swelled to as many 36 points in the second half as the Suns took advantage of a dismal 3-point shooting night from the Grizzlies.

Chicago won for the third time in four games as LaVine shined again, surpassing the 30-point plateau for the seventh time in eight games and 15th time this season. LaVine shot 15-for-20 from the floor to boost the Bulls to a 59.8% effort from the field.

Marvin Bagley III had a double-double of 26 points and 11 rebounds to lead the Kings in the first game of a five-game road trip. Buddy Hield followed with 23 points, and De'Aaron Fox added 20 points and nine assists.