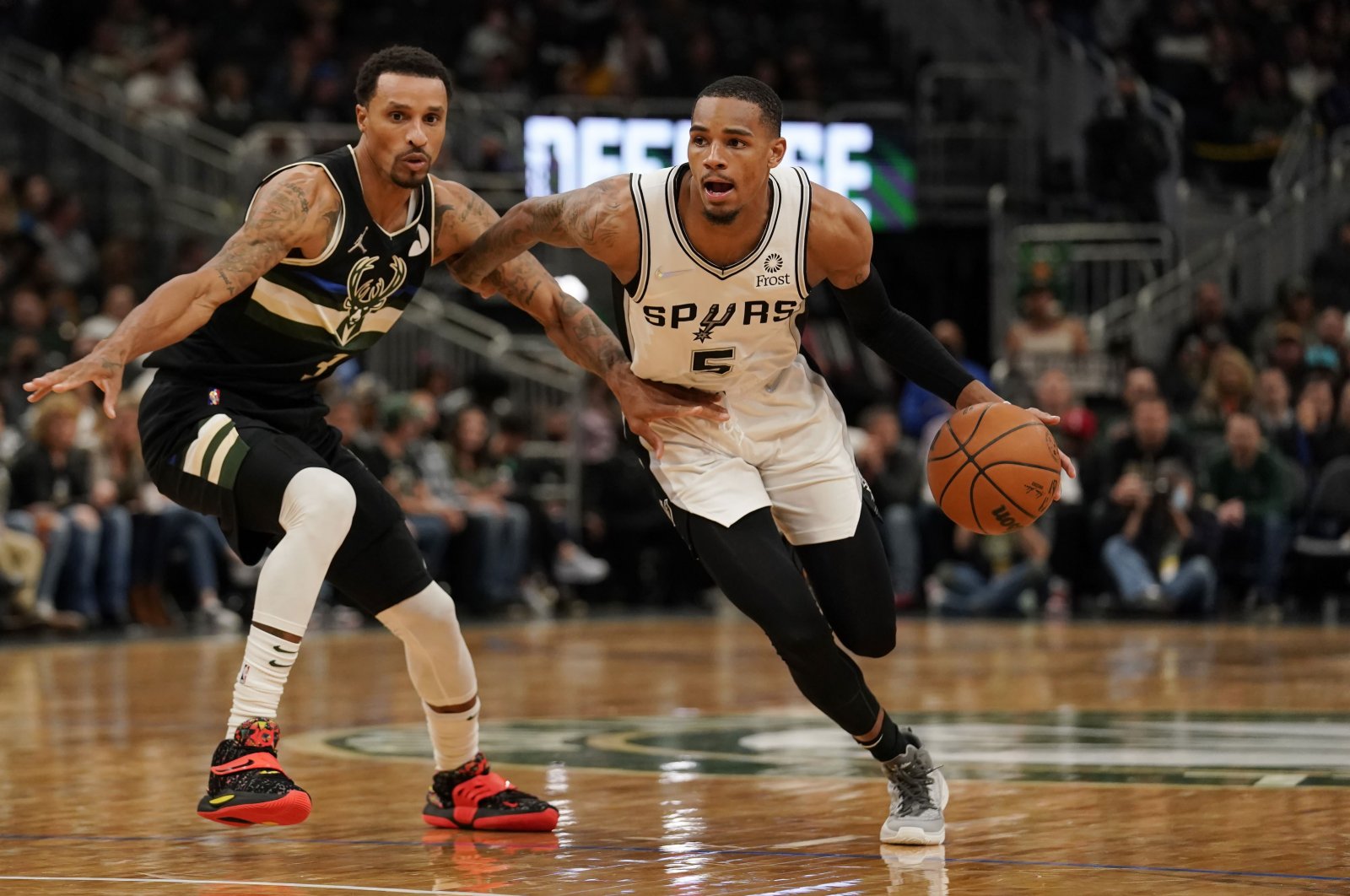 NBA champion Milwaukee Bucks was stunned 102-93 by San Antonio on Saturday, as the Spurs ended a four-game losing streak and picked up its first away victory of the season.

Point guard Dejounte Murray and reserve Bryn Forbes led the charge as five players, including two off the bench, scored in double figures for the Spurs, who improved to 2-4 on the season.

Murray scored a team-high of 23 points, Forbes had 16, Derrick White delivered 17 and Keldon Johnson finished with 12 points and 11 rebounds for the Spurs. Thaddeus Young came off the bench to score 10.

"I love having the ball, no matter what," said Murray, who finished with nine assists. "I take pride in being a pass-first point guard, but also being ready when my number is called."

The Spurs were playing the third game of a road trip and coming off a disappointing 104-99 loss to Dallas.

"Obviously, it's a good win against the NBA champions," Spurs coach Gregg Popovich said. "They were missing a pretty big piece tonight but it happens to all of us."

The Spurs played without starting forward Doug McDermott, who has an injured knee.

In Washington, Bradley Beal scored a team-high of 36 points and Kyle Kuzma grabbed a career-high 17 rebounds as the Washington Wizards continued their hot start to the season by beating the Boston Celtics 115-112 in double overtime.

Both Kuzma (17 points) and Montrezl Harrell (20 points, 14 rebounds) finished with double-doubles as the Wizards improved to 5-1 for their best start since the 2005-06 season.

"It just shows our resilience," Washington coach Wes Unseld Jr. said. "I keep using that word, but it's who we are and who we have to be. And every night somebody else finds a way to step up and make a play for us."

Boston's Jaylen Brown finished with 34 points and Jayson Tatum tallied 27 points and 15 rebounds. Josh Richardson was the only other Celtic to score in double figures, coming off the bench to score 18.

Al Horford grabbed 10 rebounds and blocked six shots for the Celtics, who played in their third overtime game out of six contests this season.

Beal made a layup with 25 seconds left in the first overtime period that forced a second one.

In double overtime, Beal scored on a fadeaway and layup, then Spencer Dinwiddie hit for two of his 20 points to give Washington a three-point lead.

'We got the job done'

Tatum forced a Kentavious Caldwell-Pope turnover to give Boston one last gasp. But Caldwell-Pope then stripped Brown on the final possession to secure the win for the Wizards.

"We stayed composed, we stayed within each other, and we got the job done," Caldwell-Pope said.

Cunningham was sidelined the first four games with an ankle injury. He played 19 minutes, mostly in the first half, and shot one-for-eight from the field while scoring two points. He added seven rebounds and two assists.