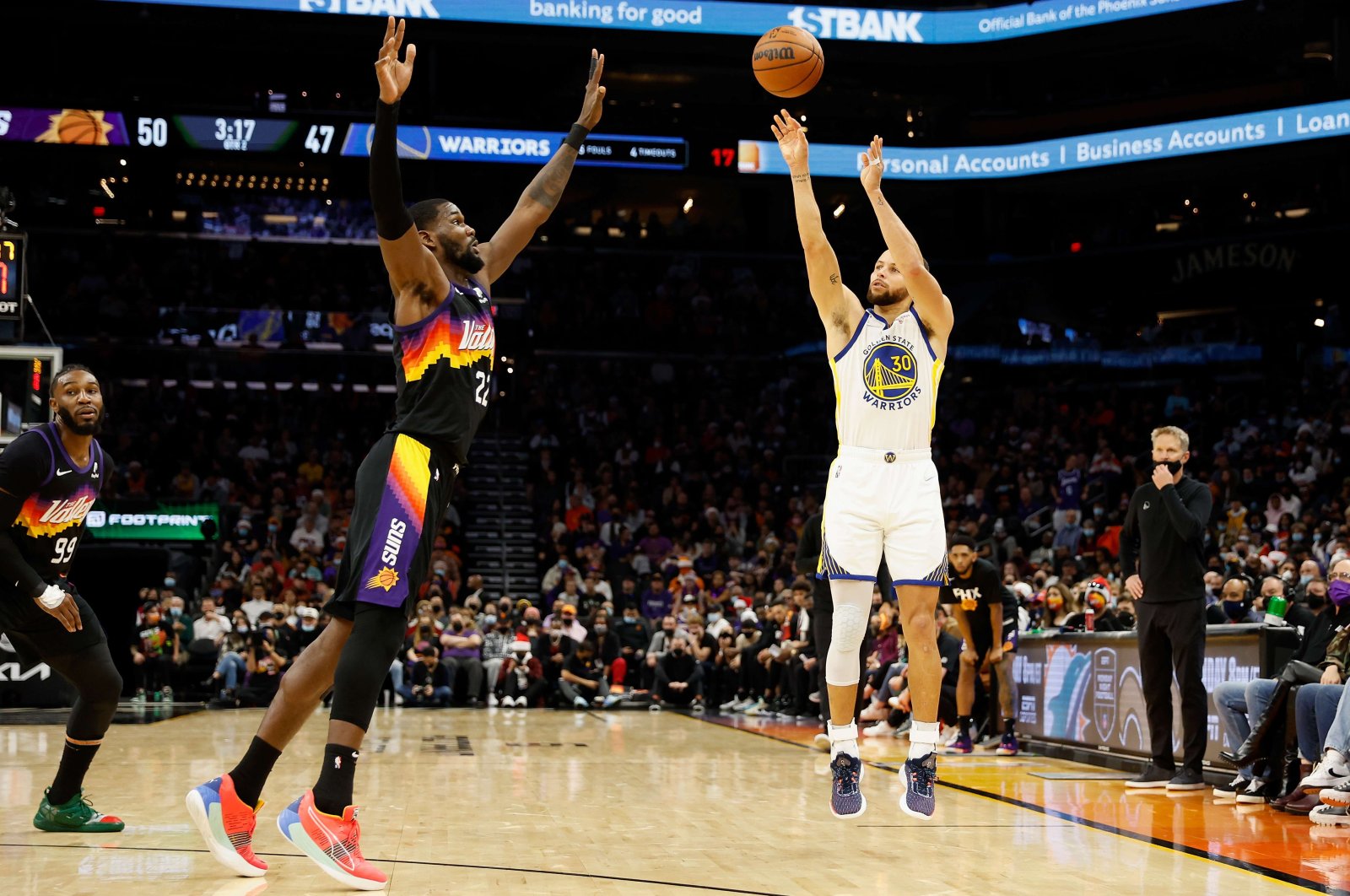 Golden State Warriors edged Phoenix Suns 116-107 in the fight for the best record to go top in NBA on Saturday.

Stephen Curry scored 33 points to power the Warriors despite a surge of COVID-19 cases around the league robbed the festive five-game slate of some star power.

However, there was no lack of drama.

"The fact that it came on Christmas, we're on the road, what a great Christmas gift for our guys," Warriors coach Steve Kerr said.

"They obviously gave it to themselves, but it's fun playing on Christmas, there's a special vibe and obviously this game with the two teams with the best record in the league had a special feel to it."

Otto Porter Jr. scored 13 of his 19 points in the fourth quarter as the Warriors pulled away to win a back-and-forth battle that featured 12 lead changes.

The Warriors arrived in Phoenix for the marquee clash with three of their top four scorers – Andrew Wiggins, Damion Lee and Jordan Poole – sidelined by COVID-19 concerns.

Curry mostly filled the void and for the first time in nine Christmas games scored more than 20 points – despite connecting on just 10 of 27 shots from the field, including five of 16 from 3-point range.

"I'm proud of everybody, man, because not a lot of people picked us to win tonight," said Curry, who praised Porter's poise after the Warriors ended the Suns' 15-game home winning streak.

Porter, making his second start of the season after he was thrust into the lineup for the first time Thursday, scored eight points in the final two and a half minutes, draining a 3-pointer that sealed the win with less than a minute remaining.

"He can shoot the ball," Curry said.

Giannis Antetokounmpo scored 36 points in his return from COVID-19 protocols, powering the NBA champion Milwaukee Bucks to a 117-113 comeback win over the coronavirus-depleted Boston Celtics.

There would be no miracle comeback for the Los Angeles Lakers, however, as their bid to rally against a Brooklyn Nets team returning from a weeklong COVID-19 hiatus came up short.

The Nets, who had a league-high 13 players sidelined by COVID-19 last week and had three games postponed, led by 23 points in the fourth quarter but saw the Lakers tie it up with 45 seconds remaining, before scoring the final seven points in a 122-115 victory in Los Angeles.

Nic Claxton dunked over Lakers star LeBron James to break a tie with 40.7 seconds remaining and the Lakers, despite 39 points from James, suffered a fifth straight defeat.

In Milwaukee, Antetokounmpo, who had missed five games, scored 29 points in the second half as the Bucks rallied to deny a gutsy Celtics squad.

Boston had nine players unavailable because of COVID-19 concerns, 10 counting Al Horford, who cleared protocols but was deemed not yet game fit.

Brown, Jayson Tatum and Marcus Smart combined for 69 points for Boston, who led by as many as 19 and were up by 13 with 5:28 remaining.

Bucks reserve Wesley Matthews drained a three-pointer with 30.3 seconds remaining to put Milwaukee up by one – their first lead of the contest and one they wouldn't relinquish.

The holiday action opened at Madison Square Garden, where Kemba Walker became the first New York Knicks player to post a triple-double on Christmas with 10 points, 10 rebounds and 12 assists in a 101-87 victory over the Atlanta Hawks.

In the nightcap, Donovan Mitchell scored 33 points to lead the Utah Jazz to a 120-116 victory over the Dallas Mavericks.