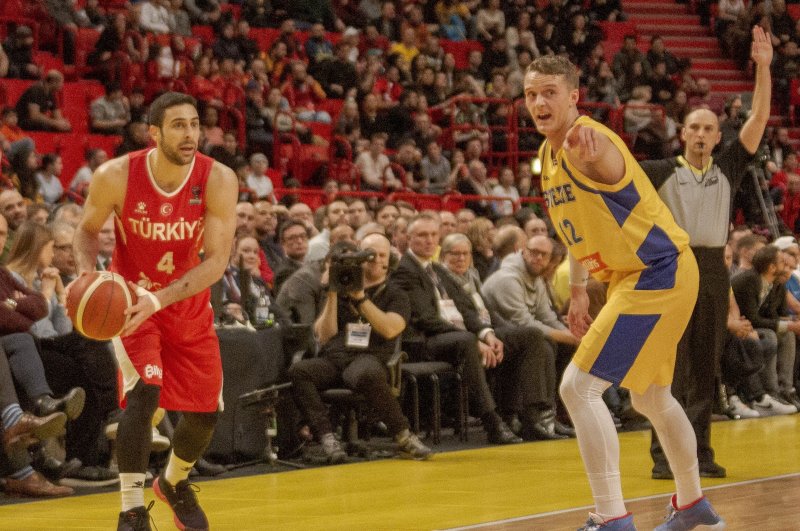 The Turkish team continued its disappointing form in Sweden, having lost the first two games in the Group D qualifiers.

Ludvig Hakanson was the hero of the game for Sweden, scoring 23 points at the Globe Arena, plus making eight assists.

It was Turkey’s second defeat in Group D. Earlier Friday, it suffered an unexpected 65-72 loss to the Netherlands in Ankara, marking a bad start to the EuroBasket 2021 qualifiers.

The Turkish team is in the same qualifying group as Croatia, Sweden and the Netherlands to book a spot in next year's EuroBasket tournament.

The next two games will be held in November as Turkey first visits Croatia on Nov. 26 and travel to the Netherlands on Nov. 29.

Croatia leads Group D with an away victory, beating the Netherlands 69-59 in Almere. The Croatians are on a two-game run.

The Netherlands is in second place, with one win and one loss. Sweden, meanwhile, is in third place with a win and a loss. With two losses, Turkey is in the last place.

In total, 32 nations divided into eight groups are playing in the EuroBasket 2021 qualifiers. As teams compete in a round-robin format, each nation clash with all other contestants in a series of home and away games. The top three teams from each group, except the FIBA EuroBasket 2021 co-host nations, will secure their tickets for the EuroBasket 2021.

FIBA EuroBasket 2021 will be co-hosted by the Czech Republic, Georgia, Germany and Italy. These teams will also play in the qualifiers. For groups that have host countries, the host nations and the two other highest-placed teams in each group will advance to the next year's EuroBasket tournament.

Regardless of the results, host teams will qualify for EuroBasket 2021. There will be six game days across 2020 and 2021, with group qualifiers beginning on Feb. 20. The first two games will take place in February 2020, but there will be a break until Nov. 26, when the third game day begins.