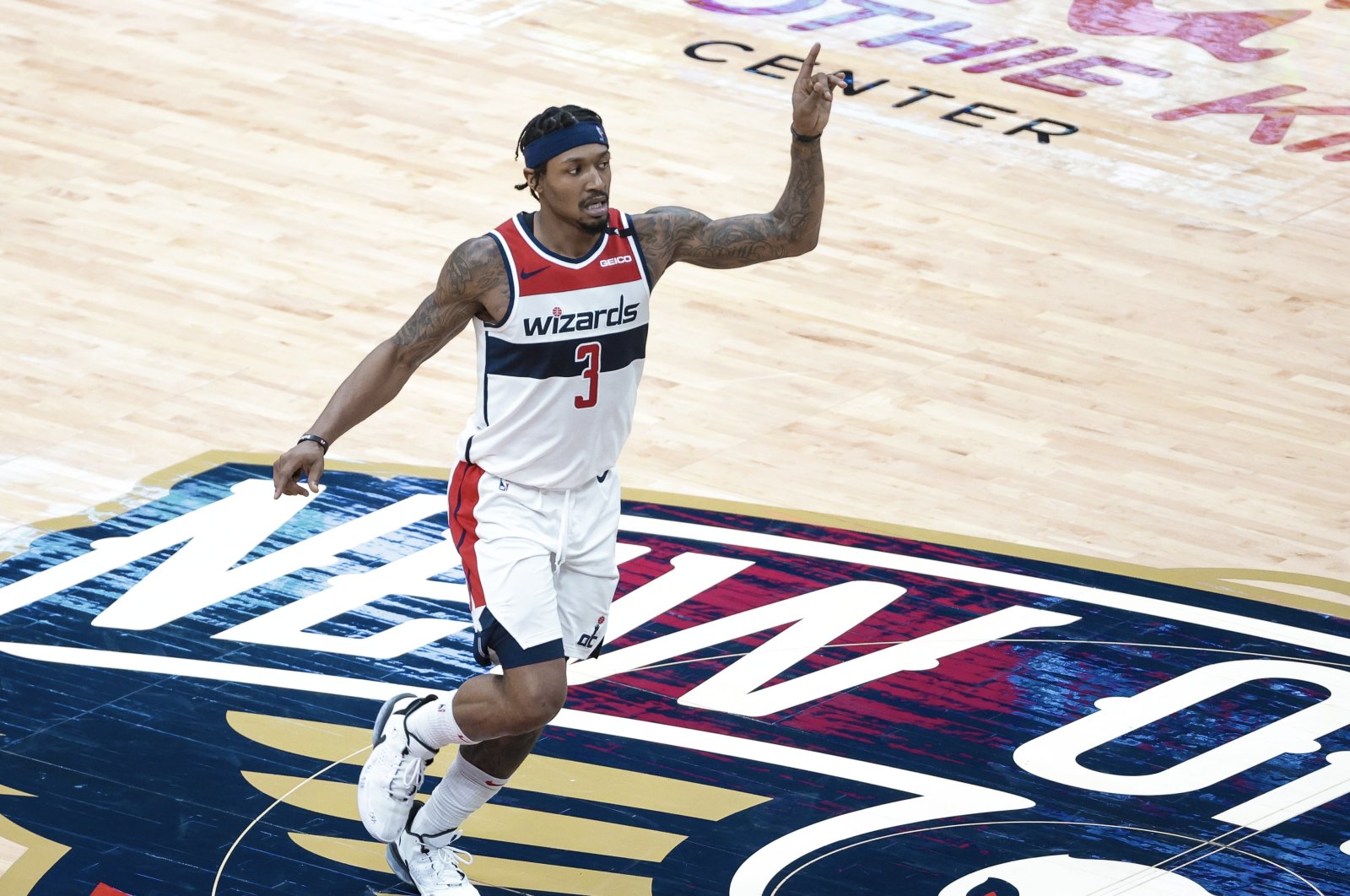 Washington Wizards guard Bradley Beal reacts after a score against the New Orleans Pelicans in the fourth quarter of an NBA basketball game in New Orleans, Louisiana, U.S., Jan. 27, 2021. (AP Photo)
by Daily Sabah with AP Jan 28, 2021 9:49 am
RECOMMENDED

Washington Wizards star Bradley Beal had another stellar game, scoring 47 points, albeit in vain as his team lost to the New Orleans Pelicans on the road.

By losing Wednesday night, Beal set a dubious NBA record as his team lost 10 straight games when he scored 40 or more points. The previous decades-old record was held by Walt Bellamy of the Chicago Packers.

In fact, Beal performs best in the Wizards' losses rather than wins. He is averaging 36.8 points per game in defeats and 30.7 in victories.

Beal is the NBA's leading scorer, while the 3-11 Wizards are dead last in the Eastern Conference.

“I try to come out and play with energy every night. Whatever it looks like at the end, it looks like,” Beal said. "I don’t come out and say I want to score 50 tonight. ... That doesn’t happen. A lot of the (stuff) I’m doing, I’m in awe of it half the time, too."

Brandon Ingram and Zion Williamson scored 32 points each as the Pelicans defeated the Wizards 124-106.

Ingram tied a career-high by making seven 3-pointers as he and Williamson scored 30 in the same game for the first time in their two seasons together. Eric Bledsoe added 18 as the Pelicans began a five-game homestand with their second victory in 10 games.

Beal scored 24 of his points in the third quarter and made 17 of his 37 shots overall, including six of 14 3-pointers. Garrison Mathews scored 15 points and Robin Lopez added 14 for the short-handed Wizards, who lost their third straight since returning from a nearly two-week absence due to COVID-19 protocols.

Williamson made five of six shots and scored 11 points as the Pelicans rolled to a 35-18 lead at the end of the first quarter.

The Wizards started the second quarter by feeding the ball to Lopez consistently, and he responded by scoring their first nine points to pull them within 38-27. They got within nine before Williamson scored five straight.

Bledsoe and Lonzo Ball each made a 3-pointer as New Orleans pushed its lead to 56-36.

Beal scored five straight points, but the Pelicans built the lead to 23 before taking a 64-45 cushion into halftime.

The Pelicans led by 19 points at halftime and didn't give the Wizards an opportunity to make a run because they started the third quarter with a 10-3 run of their own.

Beal scored Washington's next 10 points as the Wizards started to chip away at the lead. He scored 11 straight Wizards points later in the quarter before assisting on Mathews' 3-pointer that cut the lead to 94-80 at the end of the period.

Washington scored the first two points of the fourth quarter, but New Orleans scored the next five.

The Wizards got within eight three times, but the Pelicans answered each time. Ingram's 3-pointer pushed the lead to 113-100 with less than five minutes remaining.

The Wizards will play Atlanta on Friday to open a two-game homestand, while the Pelicans will host Milwaukee on Friday in the second of five straight home games.