Current state of affairs as sports seek return to action 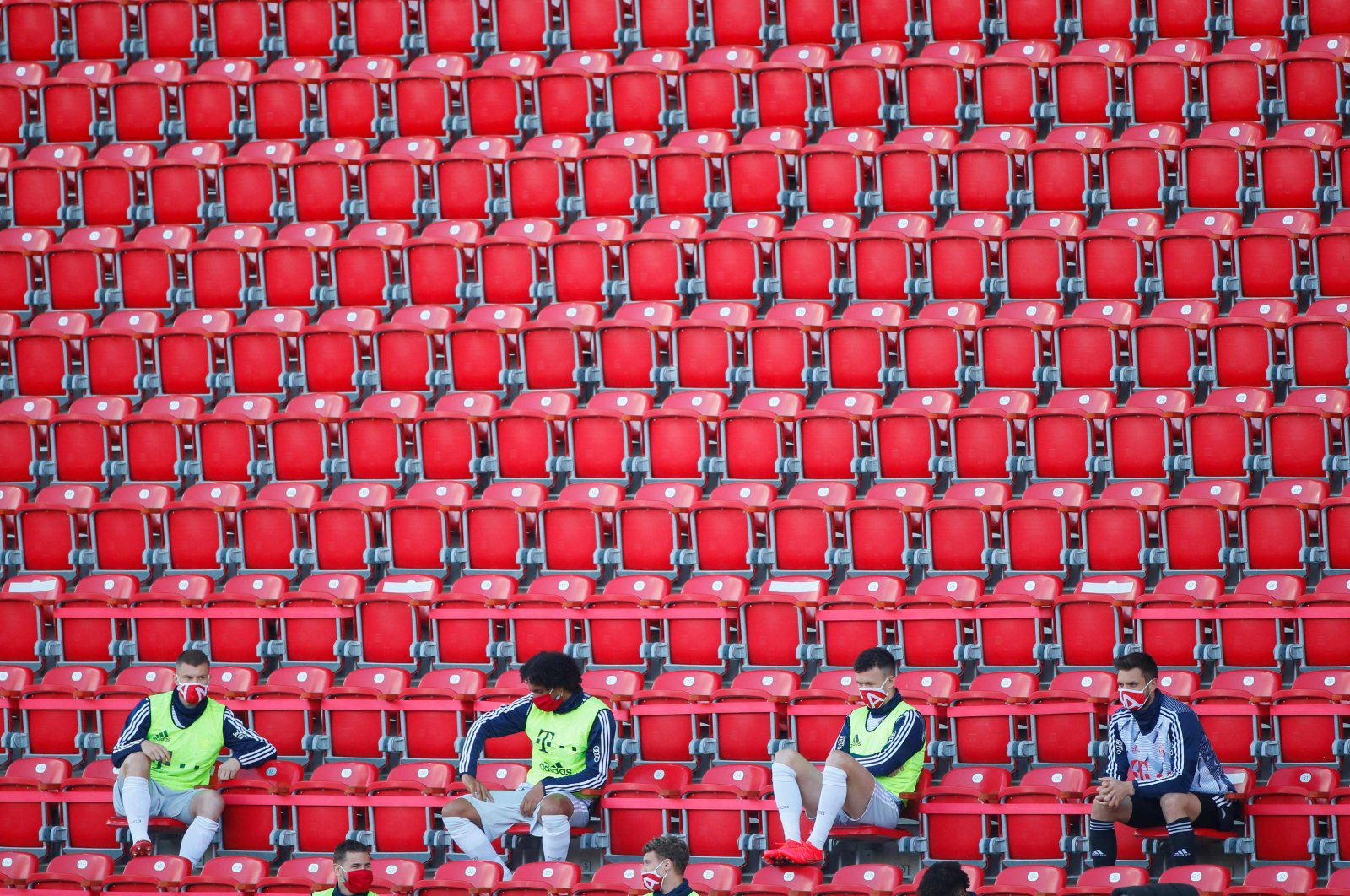 With Bundesliga returning in Germany and NASCAR resuming races in the U.S., sports organizers across the globe shuffle to save what’s left of their seasonal calendars

Sport's big-ticket events such as the 2020 Tokyo Olympics, European football championships, Wimbledon and the British Open golf tournament have either been postponed or canceled because of the coronavirus pandemic that brought much of the world to a standstill.

However, the return of Bundesliga football in Germany and NASCAR races in the U.S. showed there is a chance of returning to the action. With the pandemic showing signs of slowing down, here is an outlook of four major sports across the world.

The German Bundesliga became the first major European league to resume on May 15 but matches were played behind closed doors and players elbow-bumped to celebrate goals.

Borussia Dortmund thrashed local rivals Schalke 4-0 in the highlight of the first day back, in an empty and echoing Signal Iduna Park stadium. The Bundesliga wants to complete the last nine rounds of matches before June 30 to secure around 300 million euros ($325 million) in television money.

Players had been warned to keep their emotions in check, and to resist from spitting, handshakes and hugging with the games keenly watched by the rest of the football world hoping to restart their own leagues.

Team staff, and players who didn’t start, wore masks. Substitutes took their positions in the stands, rather than beside the field, while balls and seats were disinfected.

The English Premier League has said it would like to restart its season in June and play the remaining 92 fixtures by August. But the plans are at risk of being derailed by a heated debate between players about health concerns. There are also deep divisions among clubs over playing at neutral venues, with those in danger of relegation particularly opposed.

Things were further complicated for Premier League after three clubs announced six new positive cases Tuesday, after players and staff were tested ahead of a return to training.

In Spain, La Liga president Javier Tebas has set a tentative return date of June 12 and clubs are back to training.

The return to group training follows a government announcement last week that allowed sports teams to return to activity regardless of the status of the lockdown in their own region.

Previously, only teams from regions that were in phase one of the de-escalation of the national state of emergency would be able to return to training in groups. The provinces of Madrid and Barcelona are currently in phase zero.

Barcelona's World Player of the Year Lionel Messi said he is comfortable with returning to play again.

In Italy, Serie A clubs were allowed to begin team training but, in a country hit hard by the pandemic, there is deep uncertainty as to whether the league can resume in June. Italy’s Sports Minister Vincenzo Spadafora said the restart process would depend on the progress of the contagion curve in the upcoming days.

The main stumbling block for Serie A is the government's insistence that if a player tests positive the whole squad must go into quarantine for 14 days. The clubs argue that isolating the player involved should be sufficient.

The clubs are also opposed to the stipulation that each squad, including coaching and backup staff, should undergo a training camp in complete isolation before the league restarts. They say this would create huge logistical problems.

Spadafora said he has scheduled a meeting on May 28 with FIGC President Gabriele Gravina and Lega Serie A chief Paolo Dal Pino to decide on how to return to competition.

Serie A still has 12 rounds of match days to play plus four games postponed from earlier rounds.

In Turkey, the expected date for the restart was announced as June 12 by the Turkish Football Federation (TFF) but more than a dozen new cases among players and even executives cast doubts over the possibility of a restart.

TFF released an expansive list of rules and precautions to be followed during the matches but a short-lived dispute between Turkish football’s governing body and the Health Ministry raised questions whether TFF’s expectations were realistic.

Meanwhile, the Netherlands became the first European country to bring an early end to the season on April 24 as the Eredivisie was canceled without a champion being crowned.

France then followed suit on April 30, ending the season with 10 rounds of matches unplayed.

The season was not voided, though, with Paris Saint-Germain confirmed as champions, European places dished out and relegation and promotion between the top two divisions maintained on a two-up, two-down basis.

Belgium has also ended its season, with the Club Brugge champions, after the Belgian government announced it was suspending all sporting competitions until July 31.

In Scotland, the season had already been called early in the three divisions below the top flight and the Premiership followed suit on Monday, with Celtic being crowned champions for the ninth year running.

Having the nearest date on the Grand Slam calendar, Wimbledon organizers were forced to cancel the tournament. The announcement in April marked the first time the oldest tennis tournament was canceled since World War II.

But the organizers of the other three Grand Slam tournaments are looking for other options.

The French tennis federation has moved the French Open tournament from its initial May 24-June 7 dates to Sept. 20-Oct. 4.

But tennis players around the world lashed out at the lack of communication in the wake of the French Open's shock switch as the tournament is now set to begin just seven days after the U.S. Open final in New York, leaving players to contest the clay-court Grand Slam in the middle of the hardcourt swing.

Speaking of the U.S. Open, the U.S. Tennis Association (USTA) is pressing ahead with preparations to stage the Grand Slam in New York this year but is "aggressively" drafting alternative plans for the tournament, a spokesman said last week.

Multiple reports have suggested that USTA officials are mulling a possible switch of the Aug. 31-Sept. 13 tournament to either Indian Wells or Orlando to evade the clutches of COVID-19.

Apart from the Grand Slams, ATP, which runs the men's tour, said the organization will not host an event until the first week of August in Washington.

On the women’s side, the WTA is still scheduling events in Palermo from July 20-26 and in Karlsruhe on July 28-Aug. 2, for now at least.

After 10 races were either canceled or postponed, Formula One hopes to open its season in Austria with back-to-back races on July 5 and 12. F1 boss Chase Carey insists that a 15-18 race season is still possible and that new venues could be used.

Liberty Media, the company which runs the sport, reported a collapse in revenues of more than $200 million in the first quarter of the year.

But NASCAR proved there was still hope for motorsports fans. Kevin Harvick and NASCAR both celebrated victories on June 17 as the stock car series returned to live racing from a two-month coronavirus forced hiatus at an empty Darlington Raceway.

While the day unfolded with none of the bells and whistles that have made NASCAR North America's most popular motorsport, on the track the race delivered as promised with plenty of bumper-to-bumper action.

Motorcycling's MotoGP proposed starting its season with two races on consecutive weekends in July at the Jerez circuit in southern Spain.

If approved, Jerez would host MotoGP on July 19 and 26 as well as a round of the world superbike championship on Aug. 2.

While the star-studded NBA is looking for ways to resume matches, the league failed to make any headway so far, with much of the restart process remaining in uncertainty.

NBA chief Adam Silver will study the outbreak and testing developments for another two to four weeks before the league decides about a return to competition, according to reports.

The reports said Silver emphasized that for a return to occur, all parties would need to accept that a single positive test for COVID-19 would not derail the season.

The reports also said it remains unclear at what point numerous positive tests would impact the schedule and what the format for the return may be, in terms of regular-season or playoff structure.

The NBA also reportedly continues to vet the possibility of holding all games in neutral sites, with Orlando and Las Vegas the leading candidates, in what Silver referred to as a "campus environment."

Across the ocean, top European competition, EuroLeague, is also on hold for the time being. After suspending all 2019-2020 EuroLeague, EuroCup and Euroleague Next Generation Tournament games, the organizers said they would announce their decision of whether they will resume or cancel the season by Sunday.