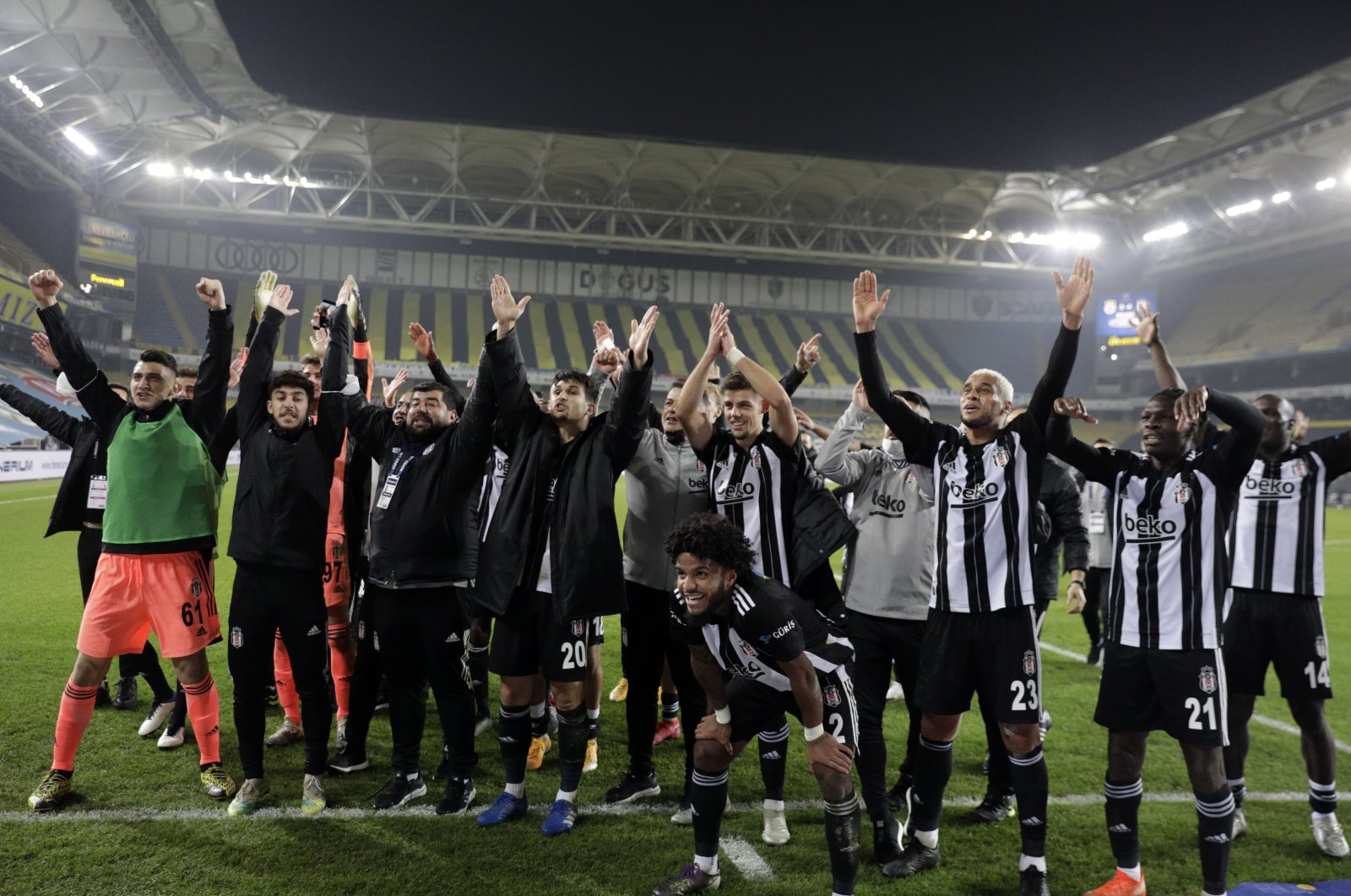 Beşiktaş players celebrate their Süper Lig victory against Fenerbahçe in front of visitor stands at the Ülker Şükrü Saraçoğlu Stadium in Istanbul, Nov. 30, 2020. (AA Photo)
by Anadolu Agency
Nov 30, 2020 10:29 am

In Sunday's Bosporus Derby, Beşiktaş forward Cyle Larin was sent off in the minute of 50 as the Black Eagles had to play with 10-men for the majority of the second half. The derby was played behind closed doors amid the coronavirus pandemic.

With the win, Beşiktaş increased its point total to 16 in nine matches, going fourth in the points table, while Fenerbahçe stayed third with 20 points in 10 games.

Beşiktaş drew first blood within four minutes as Aboubakar scored with a vicious left-footed strike in the area to beat Fenerbahçe goalkeeper Altay Bayındır. The Black Eagles doubled the lead in the 20th minute as an unmarked Aboubakar netted with a header.

Fenerbahçe forward Papiss Demba Cisse narrowed the gap to one with a close-range finish in the 34th minute and Beşiktaş finished the first half 2-1.

Beşiktaş forward Cyle Larin was sent off in the 50th minute over a foul against Fenerbahçe right back Gökhan Gönül but then Turkish midfielder Necip Uysal made it 3-1 for Beşiktaş from a header.

The Yellow Canaries' midfielder Ozan Tufan made the score 2-3 in the 68the minute with a close-range shot.

The Black Eagles' Fabrice N'Sakala scored the team's fourth in a quick counterattack in the 88th minute. Georges-Kevin N'Koudou was the mastermind behind the goal, assisting after an amazing run up the right flank.

In the injury time, the Yellow Canaries were awarded a penalty after a video assistant referee (VAR) review. Fenerbahçe's Senegalese winger Mame Thiam was fouled in the area and Tufan successfully converted the penalty but Beşiktaş still secured a 3-4 win.

Galatasaray, currently in the second spot in the standings, also has 20 points. The Süper Lig is currently led by Aytemiz Alanyaspor, which has 23 points in nine matches.