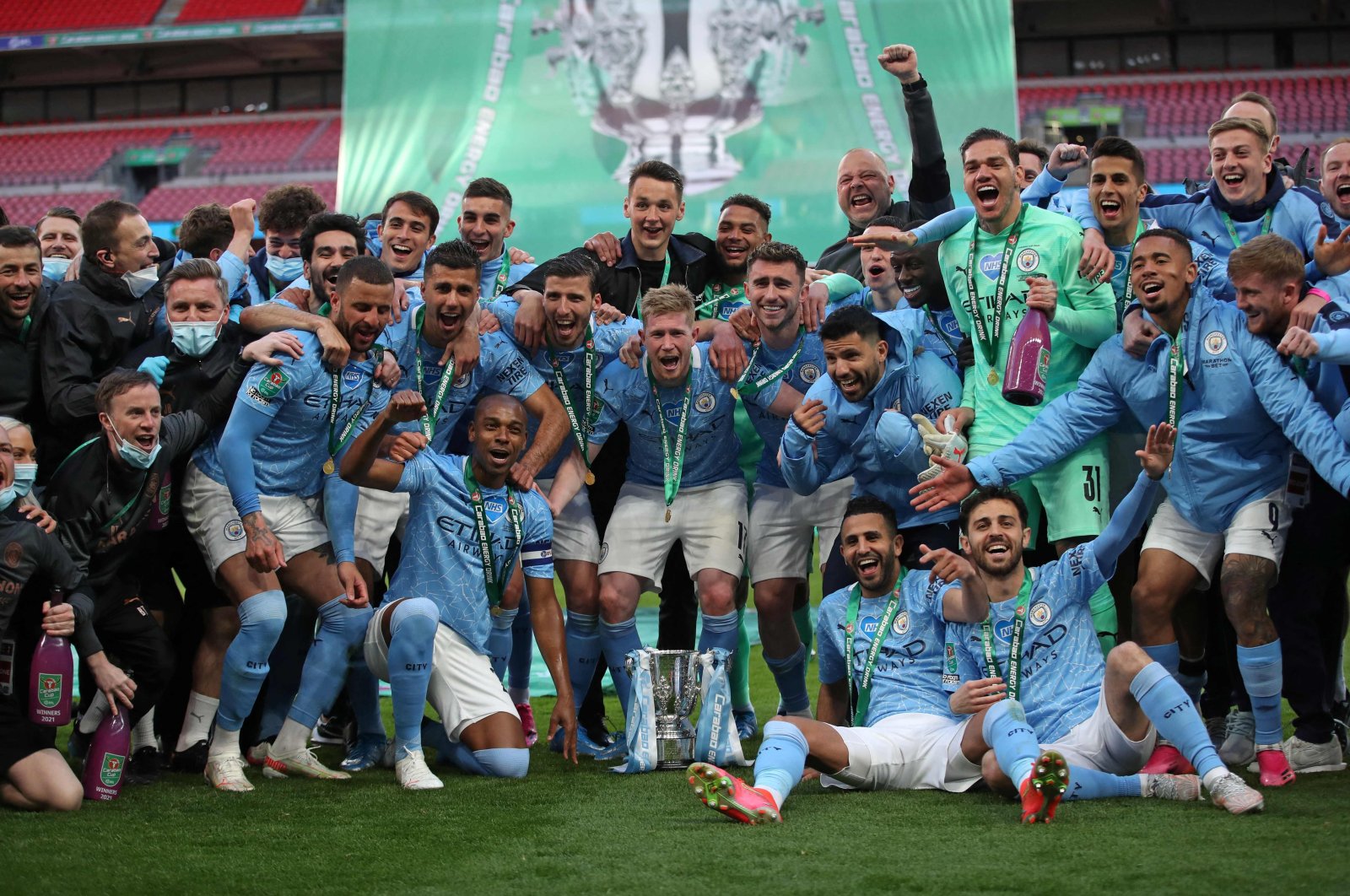 Manchester City managed to once again lift the League Cup for a fourth consecutive year at Wembley Stadium with a 1-0 win against Tottenham on Sunday, as a limited number of fans were able to enjoy the spectacle in person after missing so much of this year's and last year's competitions due to COVID-19 pandemic restrictions.

For the first time in 13 months, a football match in England had designated fans from both teams inside the stadium in one of a series of test events at the 90,000 capacity Wembley as coronavirus restrictions are eased.

City manager Pep Guardiola said winning felt much better with 8,000 supporters in attendance. "It's not full, but it is much better," said Guardiola. "To celebrate with them is much better.

"We played really well. We are incredibly happy to win the first title, four in a row in this competition, but especially because in the last 33 games, we won 30."

However, they remain on course for a treble with the first leg of their Champions League semi-final against Paris Saint-Germain to come on Wednesday before possibly sealing the Premier League title next weekend.

Victory takes Guardiola's personal tally of major trophies to 25 across his spells in charge of Barcelona, Bayern Munich and City, seven of which have come in England.

"I was in big clubs: Barcelona, Bayern Munich and here, that's why it is easier to do it," added the Catalan modestly.

By contrast, Tottenham's long wait for just one goes on. The Spurs could have no complaints, though, at the end of a chaotic week that saw them sack Jose Mourinho on Monday and, along with City and four other English clubs, pull out of a proposed European Super League amid fan fury.

Son Heung-min was reduced to tears after full-time, but in caretaker boss Ryan Mason's second game in charge, the Spurs were completely outclassed by a far superior side.

"It's difficult to take for everyone associated with the football club," said former Tottenham midfielder Mason.

"It hurts. I know that feeling and it is normal that they are hurting. This group of players care deeply about this football club. We tried, it wasn't enough today and it's tough to take."

After a slight dip in form in recent weeks, City was back to their best as they pinned Tottenham back from the first whistle and should have won by a far more comfortable scoreline.

Hugo Lloris's goal lived a charmed life, particularly during the first half.

Raheem Sterling saw a goalbound effort blocked by Toby Alderweireld before Lloris made a stunning save from point-blank range to turn behind Phil Foden's shot.

Despite Harry Kane's recovery from an ankle injury to start, Tottenham had offered nothing as an attacking threat until Giovani Lo Celso forced Zack Steffen into a fine save a minute into the second half.

The majority of the chances continued to come at the other end, but the breakthrough came from an unlikely source as Laporte rose highest to head home Kevin De Bruyne's free-kick at the back post.

The Spurs' energies were spent after conceding as they failed to muster any response to try and take the game to extra-time.

Mahrez had a second goal ruled out for offside in stoppage time.

However, one goal was enough to ensure City moves level with Liverpool on a record eight League Cup triumphs, six of which have come in the last eight years.