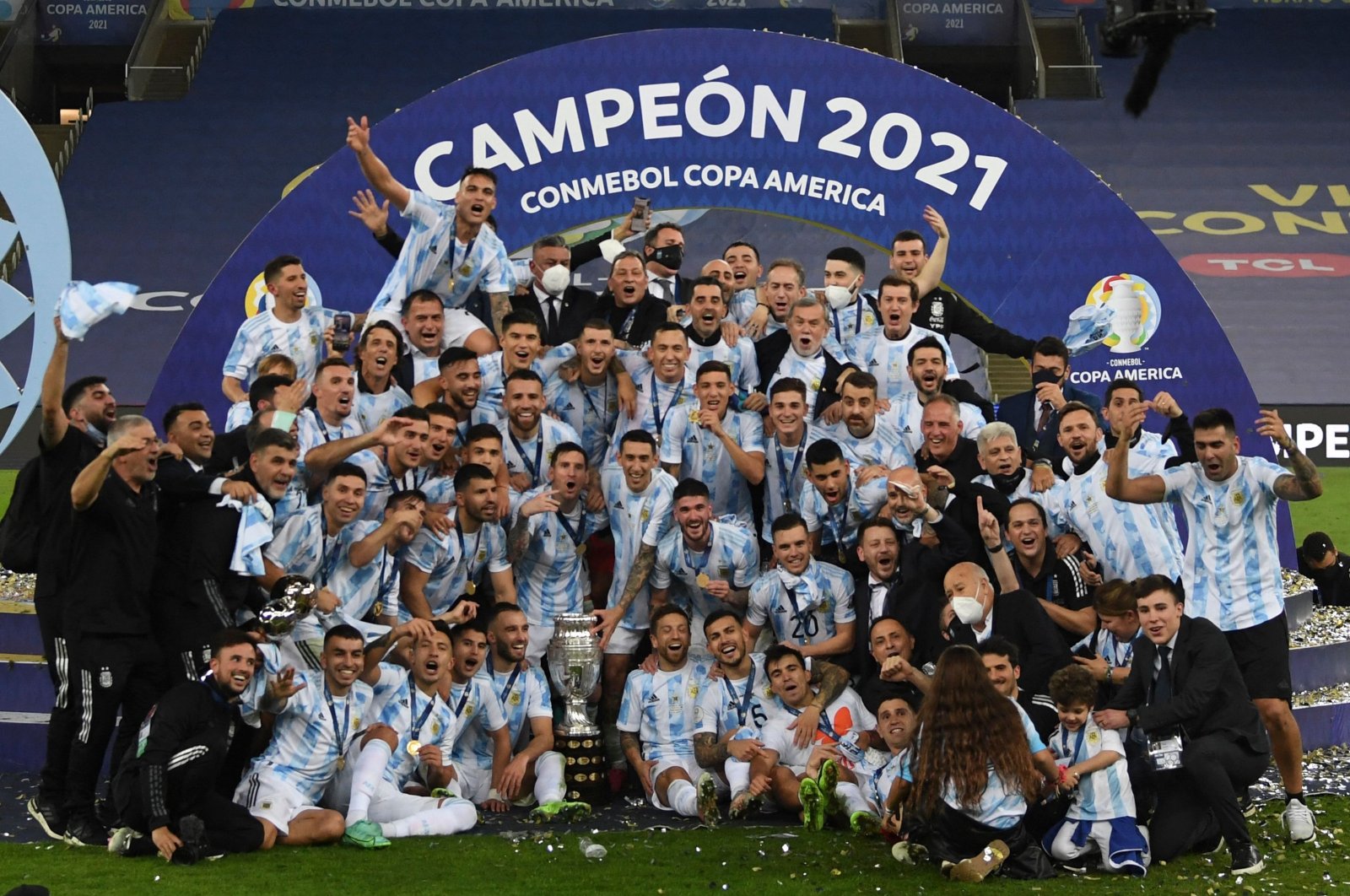 Players of Argentina celebrate with the trophy after winning the 2021 Copa America final against Brazil at Maracana Stadium in Rio de Janeiro, Brazil, July 10, 2021. (AFP Photo)
by Associated Press Jul 11, 2021 9:07 am
RECOMMENDED

Argentina's winning goal at the Maracana Stadium in Rio de Janeiro came in the 22nd minute after Rodrigo de Paul made a long pass to Angel di Maria. The 33-year-old veteran striker took advantage of some sloppy defending from left back Renan Lodi to take control and lob it past goalkeeper Ederson.

When the match ended, a tearful Messi knelt down and put his hands on his face. Then most of his teammates ran in his direction to celebrate and threw him into the air. Once criticized by Argentina fans for his quietness, he went to the few hundred guests chanting his name at the Maracana and chanted with them. Messi kissed the trophy before lifting it into the air during the presentations.

The match at the Maracana started with some surprises. Argentina coach Lionel Scaloni made five changes from the starting lineup that beat Colombia on penalties in the semifinal.

Brazil, a team recognized for its steadiness, did not make any changes from the team that advanced to the final.

The teams were cautious early in the match, barely offering chances. When Argentina opened the scoring in a rare Brazil defensive mistake and Di Maria's classy finish, the match became more physical and Argentina successfully stopped the ball from getting to Neymar.

Neymar tried hard with dribbles and passes, but the Selecao barely threatened Argentina goalkeeper Emiliano Martinez in the first half. Argentina sat in the back, hoping for counter-attacks.

Brazil coach Tite tried to change the dynamic of the match by replacing defensive midfielder Fred for Roberto Firmino, and managed to do so for much of the second half. But though the Selecao had more ball possession there were few real opportunities.

Messi's performance in the final was not as impressive as in previous matches of the tournament, during which he scored four goals and had five assists. He had a clear opportunity in the 88th minute, tried to dribble Ederson, but the Brazilian goalkeeper stopped him.

“I can't cry yet,” Di Maria said after the match. “We dreamed of getting this, and we fought. Many people criticized us and asked us not to come back (to the national team).”

The title, however, provides Messi some relief after all the questions throughout his career on his effectiveness playing for the national team.

The South American trophy is a relief for Argentina, which won its last major title when Messi was only 6 years old. Saturday's victory in Rio gave the team its 15th Copa America title, this time unbeaten, equaling Uruguay's total. Brazil has won the South American title nine times.

“If we achieved something, it was by making things natural. It is above all about transparency, one enters the other leaves. No one has a safe place," said Argentina coach Scaloni. "I hope fans enjoy this. They wanted to win it as much as us, they felt identification with this team, which may play well or badly, but never gives up.”

Messi, who has several titles with Barcelona, had reached the final of Copa America three times and lost all of them in 2007, 2015 and 2016. Now, he will have good memories at the Maracana, where Argentina lost the 2014 World Cup final to Germany.

In its path to the title, Argentina won four out of five matches in the group stage, including a hard-fought 1-0 encounter with Uruguay. It beat Ecuador 3-0 in the quarterfinals and topped Colombia on penalties after a 1-1 draw in regular time.

Brazil became last-minute hosts of Copa America two weeks before kickoff after original organizers Colombia and Argentina withdrew. Many players protested against the tournament taking place as the COVID-19 pandemic causes thousands of deaths a day in South America, even more so in Brazil where 532,000 have died.

Officials allowed a few thousand fans into the Maracana for the decider, the only match in the tournament to have spectators. There was very little social distancing in celebrations, and some fans removed their masks.