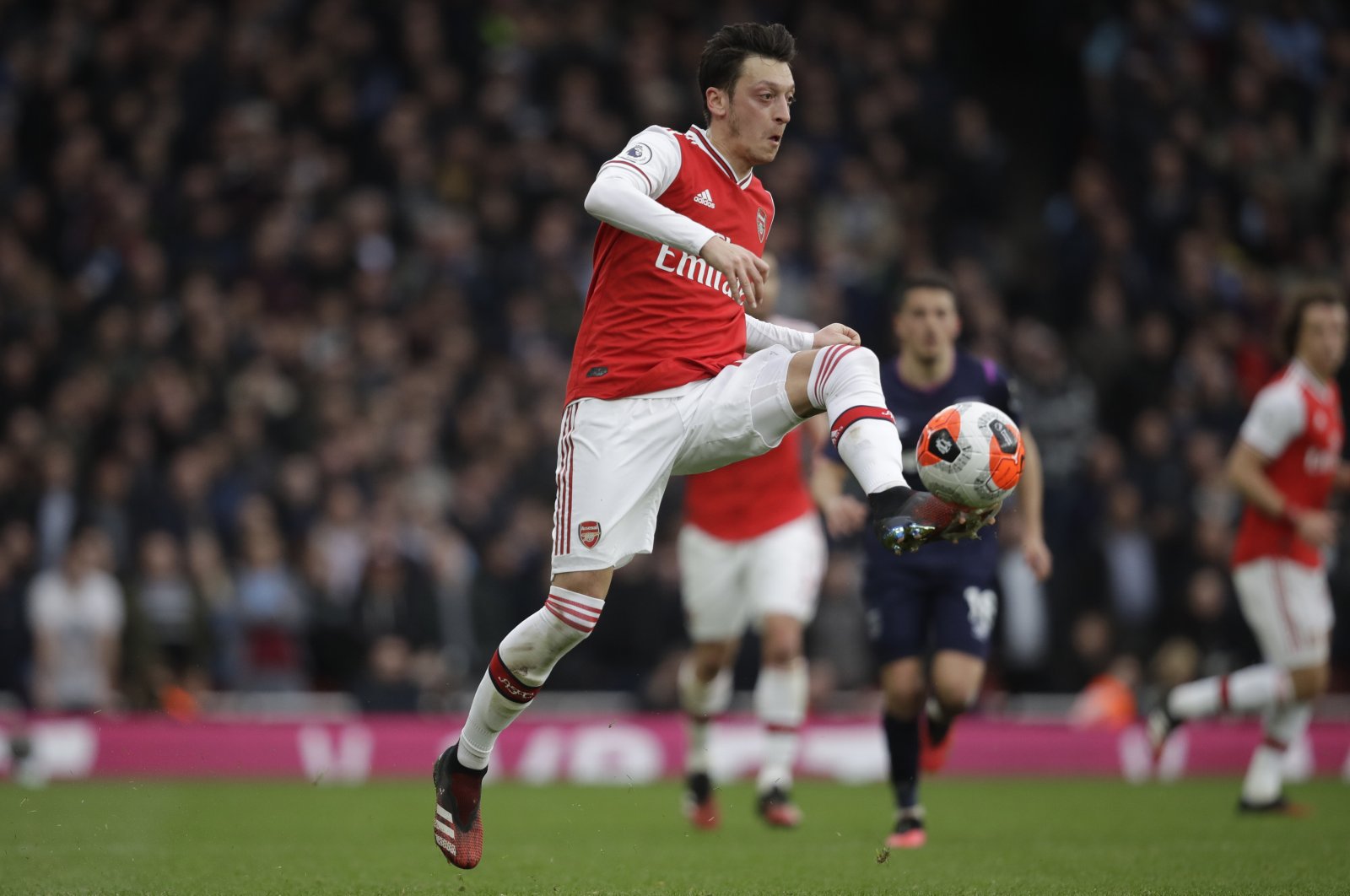 Arsenal's Mesut Özil controls the ball during a Premier League against West Ham at the Emirates Stadium, in London, Britain, March 7, 2020. (AP Photo)
by DAILY SABAH WITH AGENCIES Jan 06, 2021 12:15 pm

Two days into the January transfer window, the rumor mill went into overdrive as reports claimed Arsenal outcast Mesut Özil is on the verge of signing for Istanbul powerhouse Fenerbahçe

Turkish powerhouse Fenerbahçe and Arsenal’s star player Mesut Özil have agreed to a 3 1/2-year deal, reports said Wednesday, unleashing a wave of euphoria among the Istanbul club’s fans and setting local media on a rumor frenzy.

According to Demirören News Agency (DHA), the Arsenal outcast agreed to a 5 million-euro ($6.2 million, TL 45.2 million) annual wage, with an additional signing bonus of 2.5 million euros.

While the reports didn't disclose the details of the agreement between the two clubs – as Özil's contract with Arsenal was valid until June – DHA claimed the Premier League side agreed to pay the German-Turkish star's salary for the second half of the Süper Lig’s current season.

The agency went as far as to say Özil had already had a luxurious villa built for himself in the Kısıklı neighborhood on Istanbul's Asian side.

Soon after DHA broke the news, other local media outlets began reporting about the potential move, offering several other rumors.

Turkish broadcaster A Spor said Özil would join Fenerbahçe's squad later in January, while others claimed the Istanbul club agreed to a sponsorship deal with sporting goods producer Puma for a special kit for Özil.

Fenerbahce President Ali Koç previously said signing Özil was a "nice dream" for the club, which has been suffering financial difficulties for the past years over poor managerial decisions and has been slapped with strict spending limits by the Turkish Football Federation (TFF).

Özil, who has long been linked with a move to Fenerbahçe, fueled the rumors himself with an Instagram post about Istanbul on Tuesday. Sharing a photo of himself looking at the Istanbul Bosporus, “This city... #throwback #Istanbul,” the player wrote.

Both Fenerbahçe and Arsenal are yet to make any statement about the transfer.

If the reports are true, Özil's move would be the most sensational Süper Lig signing in years after Colombian star Radamel Falcao's transfer to another Istanbul powerhouse, Galatasaray.

With the coronavirus pandemic putting a dent in the coffers of Süper Lig clubs, TFF introduced spending limits for teams to help them avoid falling into financial ruin with extravagant transfers.

Facing TFF's spending limits on one side and UEFA's Financial Fair Play (FFP) rules on the other, many Süper Lig clubs watched helplessly as their star players departed one by one, before reinforcing their squads with free transfers instead.

Özil, arrived at Arsenal from Real Madrid in 2013, with great hopes for both sides. But his time at the Premier League club has turned into a nightmare in recent years after falling out of favor with coach Mikel Arteta's predecessor Unai Emery.

One of the highest-paid players at Arsenal, he has not played since March 2020 and was not named in the squad lists for the first half of the Premier League season and the Europa League.

While the club repeatedly said Özil’s exile was due to "football reasons," many believe his criticism of the Chinese government about the treatment of the Uighur Muslim population in Xinjiang triggered the crisis.

As the Chinese government, in retribution, refused to broadcast Arsenal games on state broadcaster CCTV, the club quickly moved to distance itself from Özil’s comments.

Arsenal is looking to offload a number of players on loan in January to trim the squad and Arteta had said last week that he would assess the future of the 32-year-old playmaker at the end of the January transfer window.

When asked about a potential return for the 32-year-old German, Arteta told reporters, "We will see what happens in the transfer window and we will assess that at the end."

Arteta also said the club would not look to cut short the contracts of players that are not in his plans.