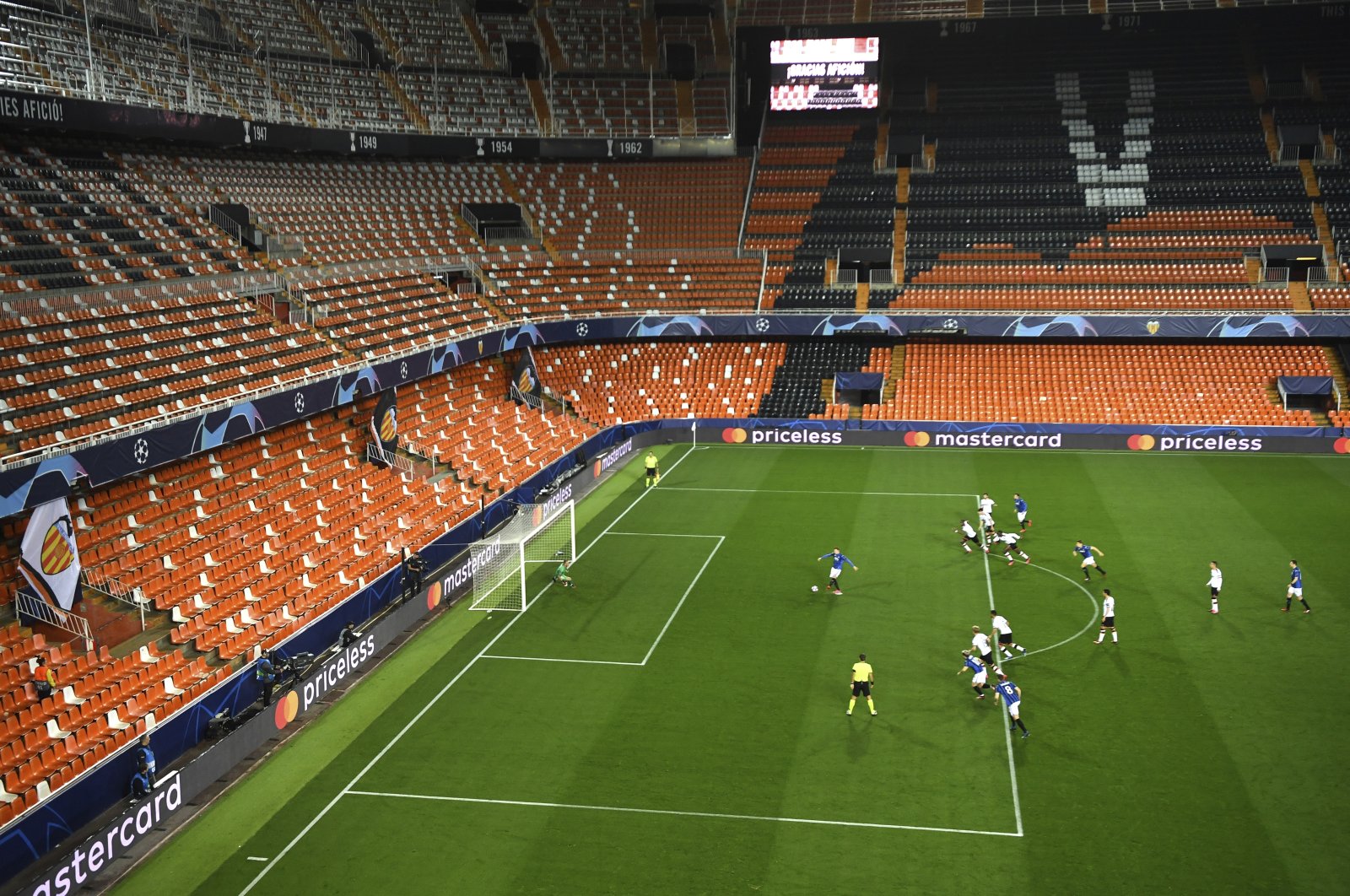 Atalanta's Josip Ilicic scores a penalty kick during the match of Champions League round of 16 second leg soccer match between Valencia and Atalanta in Valencia, Spain, Tuesday March 10, 2020. (UEFA via AP)
by Compiled from Wire Services Mar 11, 2020 8:41 am
RECOMMENDED

Leipzig midfielder Marcel Sabitzer scored twice in 3-0 in over Tottenham, sending the Champions League's youngest coach and club into the quarterfinals.

Sabitzer's first-half goals helped give Leipzig a 4-0 win on aggregate and deepened the gloom over Jose Mourinho's Tottenham, which hasn't won a game in nearly a month.

Tottenham came back from a 3-0 aggregate deficit against Ajax to reach last year's final, but a comeback never looked likely in Leipzig. Instead of the Lucas Moura hat trick which turned the Ajax game, Tottenham produced a limp second-half showing against Leipzig and eventually conceded again.

Tottenham is without a win in its last six games in all competitions. All that's left for Mourinho's team this season is the Premier League, where it's eighth, seven points off the Champions League places.

Just 11 years after it was founded by drinks giant Red Bull, Leipzig is in the last eight of the Champions League. At 32, Julian Nagelsmann is the youngest coach to reach that stage.

With Harry Kane, Son Heung-min and most recently Steven Bergwijn all injured, Tottenham seemed drained of energy and devoid of ideas.

Leipzig took just 10 minutes to double its advantage from the first leg. Timo Werner had one shot blocked on a quick team move, but picked up the loose ball and cut it back to Sabitzer, who scored with a powerful low drive from just outside the penalty area.

For the second goal, Tottenham right-back Serge Aurier misjudged his attempt to head away a long pass and allowed Angelino plenty of time to cross for Sabitzer to head in at the near post.

Leipzig's U.S. international Tyler Adams made his Champions League debut as a 56th-minute substitute when defender Nordi Mukiele was taken off for treatment after being struck in the face by the ball.

Dele Alli had the best of Tottenham's few chances in the second half, but could only knock the ball into goalkeeper Peter Gulacsi's arms as he was tackled by Leipzig's Marcel Halstenberg.

Leipzig finished the job when Emil Forsberg scored a third goal in a scramble for a loose ball in the 87th, less than half a minute after coming on as a substitute.

The game was played with a full stadium despite growing concerns in Germany over the global coronavirus outbreak.

In Tuesday's other Champions League game, Atalanta's fairytale run continued as Josip Ilicic scored four times in a 4-3 win over Valencia that sent his team into the quarterfinals 8-4 on aggregate.

A frantic contest inside an empty Mestalla stadium was the first of several in the competition to be played behind closed doors due to the virus, with 55,000 vacant seats creating a surreal atmosphere that was never likely to deliver a momentous Valencia comeback.

The sense of deflation at not having any fans on hand was impossible to ignore because before even two minutes were up, Valencia were behind.

Diakhaby slid in to block Ilicic's dummy-shot and scythed down the striker as he turned back. Ilicic drove the penalty down the middle for his 18th goal of the season.

Valencia equalised after Atalanta conceded possession cheaply in midfield and Rodrigo slid in Gameiro to finish, but Ilicic converted a second penalty before half-time, after Diakhaby feathered the ball with his hand.

Gameiro made it 2-2 by heading in Torres' cross and then Torres found the net himself, lifting the ball over Marco Sportiello to give Valencia some hope with 23 minutes left.

But four minutes later, Ilicic completed his treble with a driven shot into the corner and with progress secured, he grabbed the win too when the ball spilled out to him at the back post and he guided it into the top corner.

The Slovenia international also became the first player to score four times away from home in a Champions League knockout match.

Atalanta's progress remains the greatest surprise of this year's tournament, in which they lost all three of their opening group games and are featuring for the first time in the club's 113-year history.

"After a difficult start to this competition, we got the hang of it," said coach Gian Piero Gasperini afterward.

All the more the shame then that their advance on the back of two brilliant victories over Valencia was overshadowed by the sight of a Champions League knockout tie being played with only a handful of stadium staff in the stands.