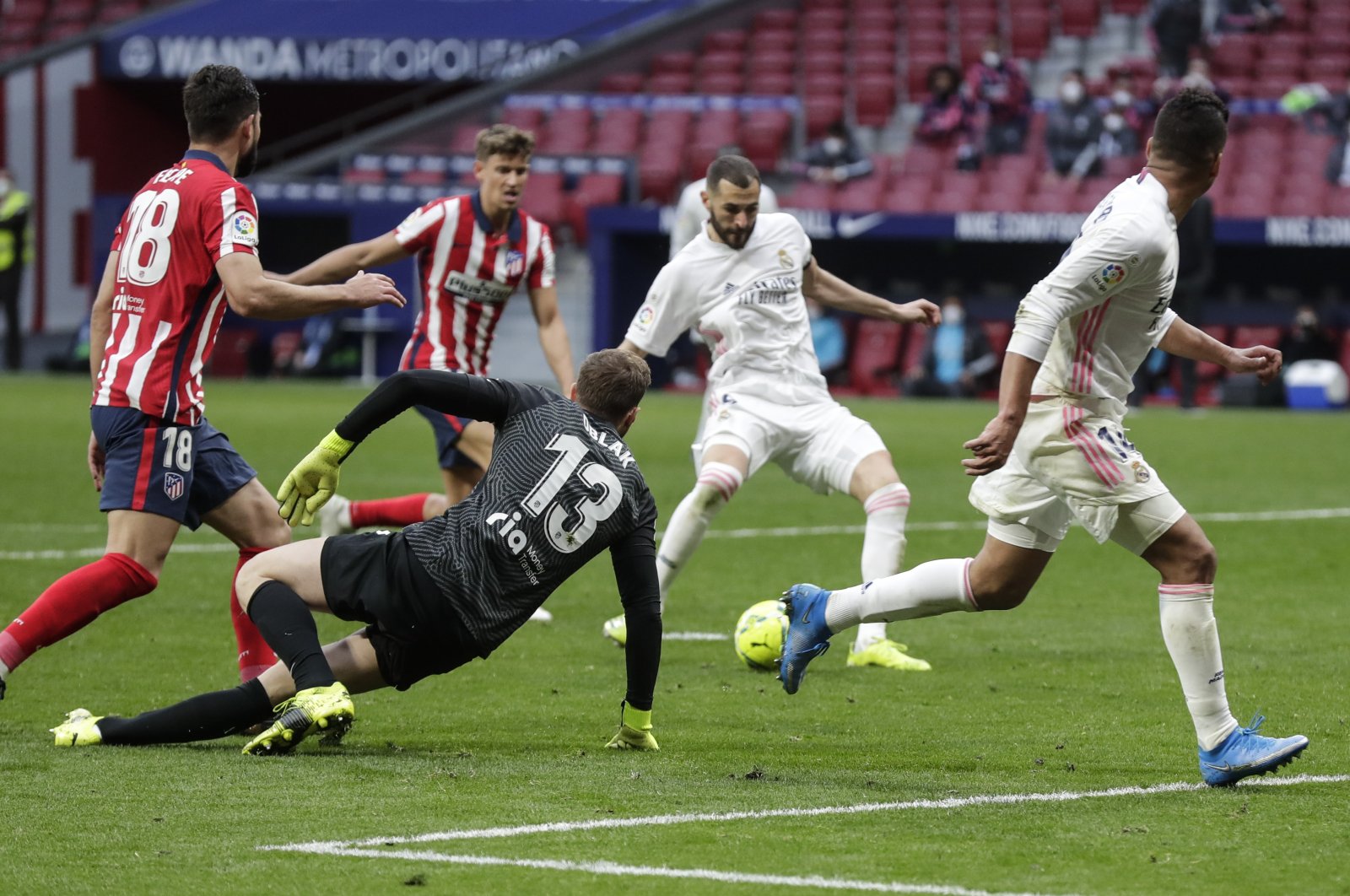 Atletico Madrid conceded late to Real Madrid to draw 1-1 on Sunday and leave the league leaders at greater risk of being caught in their pursuit of the Spanish title.

Karim Benzema, back in the Madrid squad after an injury layoff, scored in the 87th minute after Luis Suarez's early goal for Atletico at the Wanda Metropolitano Stadium. Atletico was in control most of the match and squandered several chances to add to its lead, paying the price in the end and wasting its opportunity to increase its advantage at the top of the league.

The draw kept Diego Simeone's team five points in front of Madrid and only three points ahead of second-place Barcelona, which won 2-0 at Osasuna on Saturday. Atletico has a game in hand over both Madrid and Barcelona. Atletico is trying to win its first league title since 2014. Either Barcelona or Madrid have won the title every season since then. Atletico hasn’t beaten Madrid in 10 straight league matches – since 2016 – with five losses and five draws. It lost 2-0 at Madrid in the teams’ previous encounter last year. Madrid, coming off a disappointing home draw against Real Sociedad, had won three in a row against Atletico in all competitions.

The match was played without fans but there was a large gathering of Atletico supporters outside the stadium before and during the game. Their chants and goal celebration after Suarez scored could be heard inside the venue. They were loudly heard near the end of the match when Atletico goalkeeper Jan Oblak made two superb close-range saves off consecutive attempts by Benzema.

Oblak also stopped the striker's free kick attempt a few moments later. He couldn't stop Benzema in the final minutes, though, as the striker found the net from near the penalty spot after a pass by Casemiro in one of the few mistakes by the Atletico defense during the entire match. Atletico started the game pressing forward and opened the scoring in a breakaway in the 15th minute. Suarez found the far corner with the outside of his right foot while facing Real Madrid goalkeeper Thibaut Courtois inside the area after a pass from Marcos Llorente. Suarez, Atletico’s leading scorer with 17 goals, hadn’t found the net in five games in all competitions.

The 34-year-old Uruguay striker who joined from Barcelona this season moved within two goals of Messi, the league’s scoring leader this season. Madrid tried to gain control in the second half but it was Atletico that kept threatening the most in counterattacks, squandering several good scoring chances. Madrid remained without the injured captain Sergio Ramos, while Atletico had the return of defender Kieran Trippier after he completed a 10-game ban for breaking betting rules.

Atletico was coming off two consecutive setbacks in the league at home – it lost 2-0 to Levante and drew 2-2 with Celta Vigo. Madrid, meanwhile, had won four away matches in a row in all competitions, including 1-0 at Atalanta in the first leg of the round of 16 of the Champions League. Atletico lost 1-0 to Chelsea in its first leg in the European competition. Atletico hadn’t scored in the last three league derbies against Madrid, since Antoine Griezmann’s goal in early 2019. It has never gone four matches without a goal against its rival. Madrid has never lost in four visits to Atletico’s Metropolitano stadium in the league. It is the only league team unbeaten there. The draw kept Simeone from breaking Luis Aragones’ club record of 308 wins as a coach.