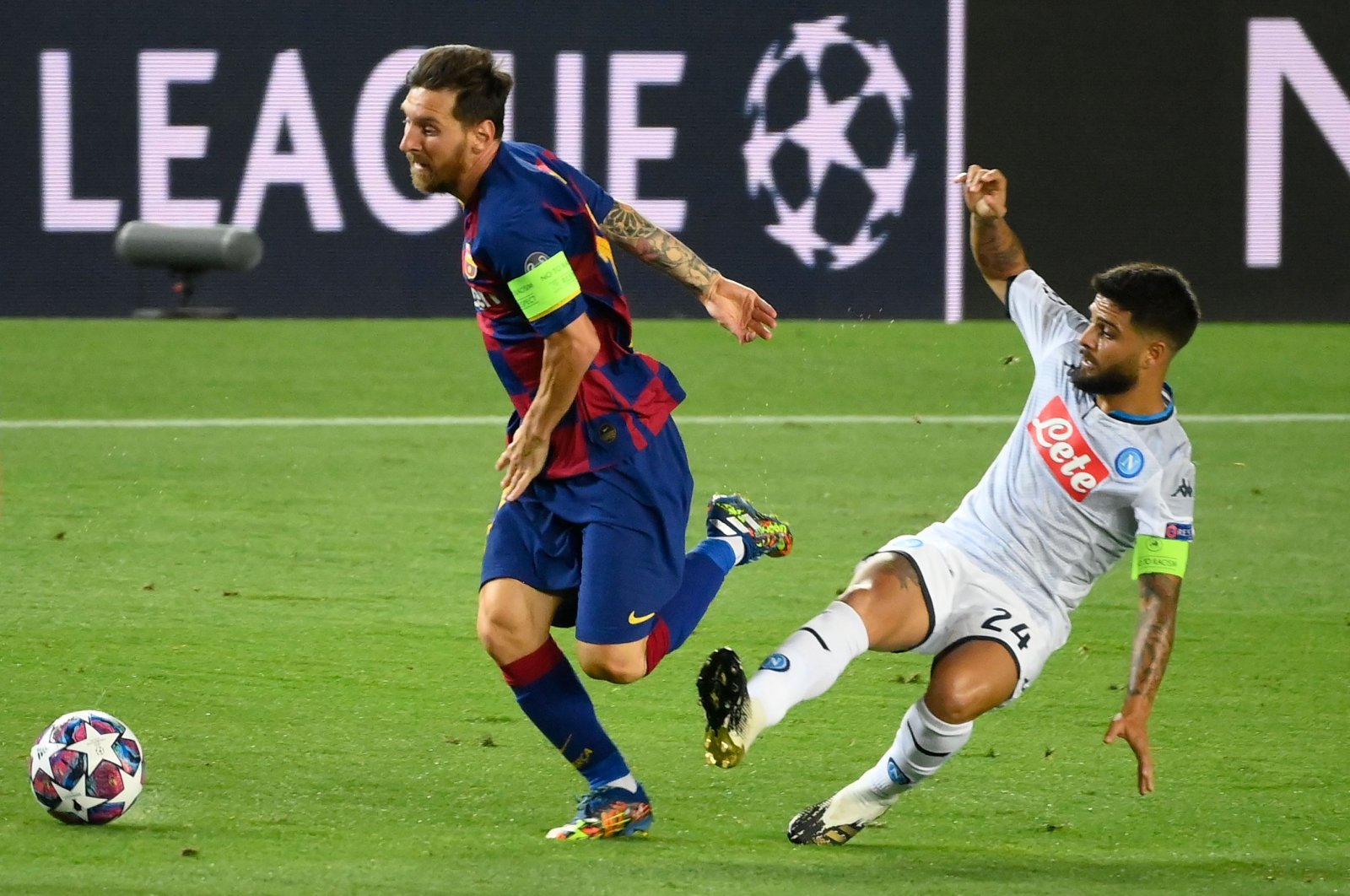 Just when it looked like Lionel Messi had nowhere to go, the Argentine great bamboozled half of Napoli’s team before scoring from an exquisite solo effort that helped Barcelona reach the Champions League quarterfinals in Portugal.

Messi netted Barcelona's second goal in the 3-1 victory that sent the Spanish side past Napoli on a 4-2 aggregate score on Saturday.

Messi’s goal in the 23rd minute was arguably the pick of the 31 he has scored this season in all competitions.

Napoli appeared to have him in check when Messi received the ball all alone outside the right corner of the area.

Barcelona's all-time record scorer, however, dipped his head and took on the well-placed defense. He kept control of the ball despite being knocked over while going past three Napoli players. Three more tried to intervene but Messi found the angle to fire while losing his balance to send the ball past the goalkeeper and inside the far post.

Clement Lenglet and Luis Suarez also scored for Barcelona which advanced five months after it drew 1-1 in Naples before the pandemic stopped European football.

Barcelona will meet Bayern Munich on Friday in the quarterfinals to be played in Lisbon in a "bubble" format of tight security to prevent a coronavirus outbreak from derailing the competition’s finale.

Bayern sealed its spot after beating Chelsea 4-1 with two goals from Robert Lewandowski to complete a 7-1 rout over two legs.

"We are more than satisfied with our first half," Suarez said. "Bayern is a great rival and is one of the favorites, along with us, of the eight that will be in Portugal.”

Messi’s beautiful goal doubled Barcelona’s lead after Lenglet headed in a corner in the 10th. The opener settled Barcelona down after Napoli’s Dries Mertens had given the hosts a scare by hitting the post shortly after kickoff.

Video review had a busy night. It disallowed another Messi goal for a handball by the forward and then awarded Messi a penalty after he slipped in front of Kalidou Koulibaly and was kicked in the lower left leg by the defender.

Messi spent several minutes receiving medical attention and Suárez stepped up to convert the spot kick. Barcelona coach Quique Setien said that Messi, who played the whole game, had a hard knock but that "I don’t think he will have a problem."

Lorenzo Insigne pulled one back for the visitors in first-half injury time with a penalty awarded after Ivan Rakitic fouled Mertens.

Gennaro Gattuso’s side came out from halftime on the attack, and in need of two goals to go through.

Barcelona’s defense held up and, once the Rakitic-led midfield got control of play, Setien had time to give a debut to youth player Ramon Rodriguez.

"We have a lot to regret, we disappeared for half an hour and conceded incredible goals," Gattuso said. "I am disappointed, I believe we could have done better."

Barcelona is searching for its first European Cup since 2015 and only a Champions League trophy will prevent it from ending the season without a title for the first time since 2014. It lost the Spanish league title to Real Madrid last month and failed to reach the Copa del Rey final.

The comfortable win comes with Setien under fire from fans after Barcelona's disappointing finish in the league, coming second to Madrid. There was speculation in Spanish media that his future hinged on beating Napoli.

After champion Liverpool, Madrid, and Juventus all exited in the round of 16, Barcelona will believe it has an even better chance to win a sixth title.

"This was the first forward step we wanted and now I hope that we play the matches ahead with the same attitude which we demonstrated here," Setien said.

The match at Camp Nou was played without spectators. Barcelona and large areas of northeast Spain are seeing a recent spike in cases of COVID-19, but health officials assured UEFA the game was safe to play despite the concerns of Napoli.

A moment of silence was held for the victims of the pandemic before kickoff.