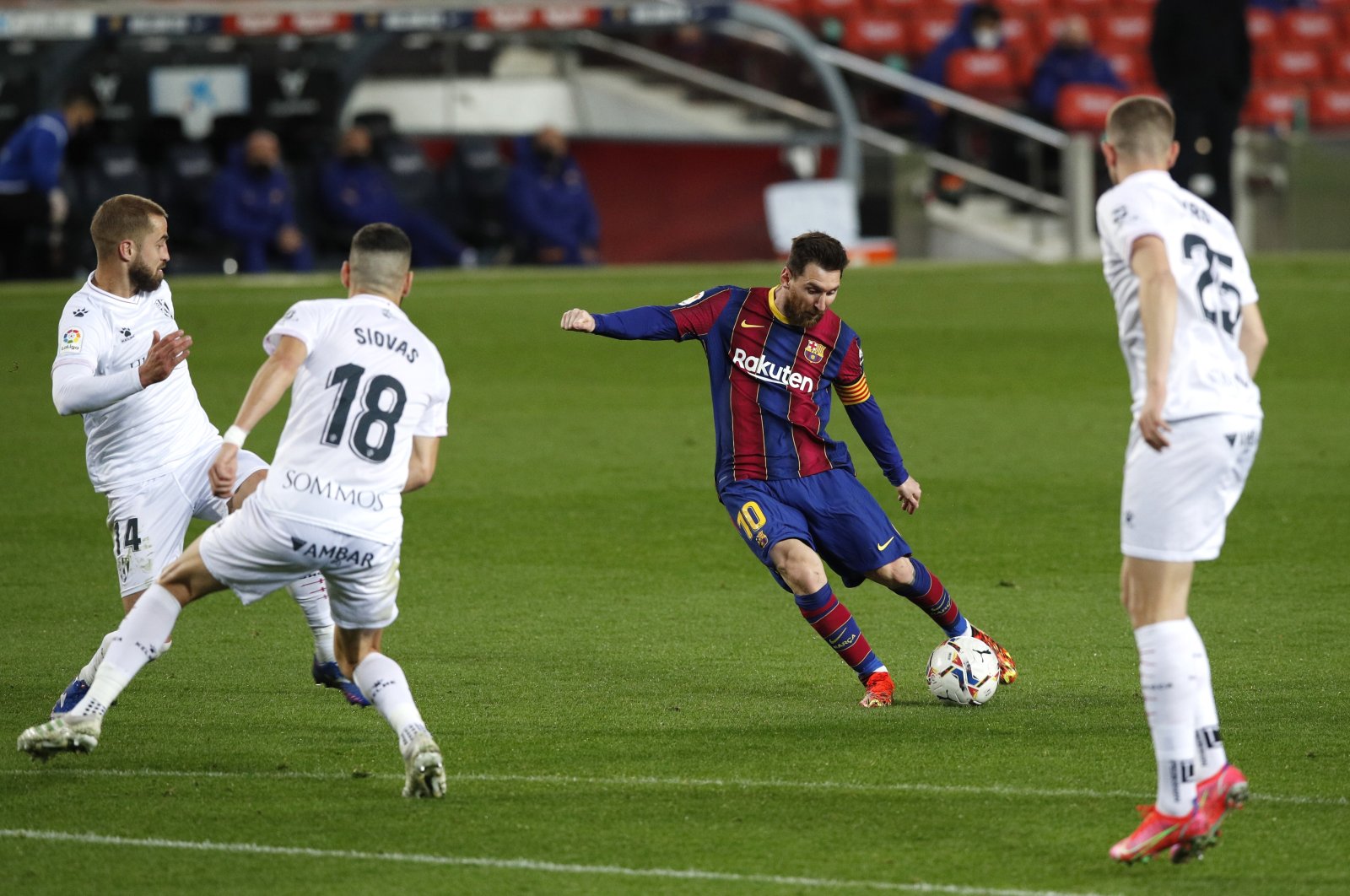 Lionel Messi celebrated his record-equalling 767th appearance for Barcelona by scoring two goals in a 4-1 La Liga victory over Huesca which helped the Catalans to move within four points of the top of the table on Monday.

Spectacular first-half strikes by Messi and Antoine Griezmann from long-range appeared to have put Barca in the driving seat with the visitors rarely threatening.

However, Barca keeper Marc-Andre ter Stegen was adjudged to have felled Rafa Mir on the stroke of halftime as the forward attacked a cross. He picked himself up to net the penalty and halve the deficit against the run of play.

A first goal for the club by defender Oscar Mingueza restored Barca's two-goal cushion eight minutes after the restart as he nodded in a Messi corner.

Mir then missed a golden chance to pull one back when he contrived to head over from close range moments later and was made to pay as Messi rounded off the win in the final minute of normal time with a deflected effort.

"We've bounced back well after dropping points early on in the season. The side are looking good and we are confident we can fight for the trophy.

"It's a great result to build on. We were good in the first-half and we kept our intensity up in the second, too.

"We can't afford to drop any more points because we've already dropped quite a lot."

Huesca, meanwhile, remains bottom of the table on 20 points, four from safety.

Diogo Jota scored against his former club to give Liverpool a 1-0 win at Wolverhampton Wanderers in the Premier League and keep them in contention for a top-four finish.

The result lifted Liverpool two places up to sixth on 46 points from 29 games, five adrift of fourth-placed Chelsea and two behind fifth-placed West Ham who have a game in hand. Wolves stayed 13th on 35 points from 29 matches.

Play was held up for 10 minutes in the closing stages as Wolves goalkeeper Rui Patricio suffered a concussion and was carried off on a stretcher after colliding with teammate Conor Coady, who tried to close down Mohamed Salah.

Jota struck in first-half stoppage time as he beat Patricio with a swerving low shot from inside the penalty area after a flowing move by Salah and Sadio Mane, who fed the Portuguese forward with a sublime pass.

Nelson Semedo missed an early chance for the home side when Liverpool keeper Alisson Becker parried his close-range effort before Mane twice came close for the visitors, who looked toothless in the opening 30 minutes.

Conor Coady headed over the bar for Wolves from a good position in the 49th minute and Patricio tipped away a Salah shot from a tight angle at the other end before sustaining the serious-looking injury.